13 Jun 2016 Is It Too Much To Expect Our Elected Officials to Understand the Declaration of Independence? 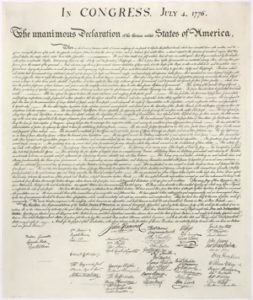 Project 21’s Nadra Enzi had some solid words in rebuttal to a black Louisiana legislator who attacked the Declaration of Independence after one of her fellow legislators proposed requiring Louisiana schoolchildren to recite part of it.

State Rep. Barbara Norton, a Democrat, objects to the Declaration of Independence because, in her words, “only Caucasians (were) free” when it was written.

Of course, this is wrong on its face, since some blacks were free in 1776, and not everyone is either black or Caucasian, but let’s look at Norton’s larger point, which is that the Declaration was inaccurate to claim, in 1776, that “all men are created equal.”

Norton’s wrong, here, too, because the point of the Declaration is to state the philosophy that all men are created equal, therefore, a government (such as the one everyone in the colonies lived under when it was written) that does not treat them all equally is a government that is unjust, and one that should be replaced.

Ironically, Norton is arguing against the Declaration because it made the same point she’s making — that everyone is equal and government should treat them accordingly.

Norton is apparently one of those people who is happy to speak publicly about things without first learning much about them. Regrettably, a lot of politicians are that way, but “everybody does it” is a poor excuse for incompetence.

Project 21’s Nadra Enzi (who also lives in Louisiana), in an interview with OneNewsNow, was more diplomatic than I am. OneNewsNow writes, in part:

A black conservative says a black Louisiana legislator was out of line for calling the Declaration of Independence “racist” during a debate.

Rep. Barbara Norton made the charge during debate on a bill to require school children to recite part of the founding document.

Nadra Enzi of Project 21 says he understands the context of Norton’s argument, namely where people of African ancestry stood at the time of the document’s signing in 1776.

In fact, the Declaration of Independence has been credited for its historic statements that mankind’s rights come from our Creator and government’s role is to protect those rights.

The words of the Declaration were sprinkled throughout the famous “I Have a Dream” speech by Martin Luther King, Jr. in 1963, during the March on Washington.

“When the architects of the Great Republic wrote the magnificent words of the Constitution and the Declaration of Independence,” King said, “they were signing a promissory note to which every American was to fall heir.”