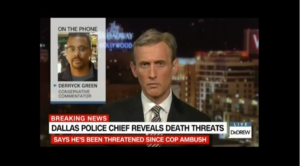 “I don’t care why he did it,” Green said about Johnson’s motive. “A lot of people have a lot of difficult things going on in their lives and they don’t resort to taking their anger or their frustration out by harming innocent people.”

Why is there such a mixed reaction within the black community to the murder of Dallas police officers? “There’s a sense of racial solidarity that exists in the black community that you have to support black people no matter what they say or do, or if you disagree… the criticism has to be minimized,” said Green. “So I think that does a disservice to the integrity of the black community by not standing up and condemning acts of evil or acts of terror when they rightly need to be condemned.”

Former NYC mayor Rudy Giuliani was criticized for saying the Black Lives Matter movement is racist and that attention should be paid instead to the murder of black Americans by other black Americans. Green responded: “It goes to selective moral outrage. Statistically speaking, he’s correct. We don’t have enough outrage when blacks kill other blacks at the rate we are killing ourselves… This is why Black Lives Matter and those types of organizations don’t have traction, don’t have moral authority outside of their ideological echo chambers, because we are not giving the proper amount of attention to those things that are more important.”