Can President Donald Trump really “send in the Feds” to deal with the skyrocketing murder and crime rates in Chicago?

Horace Cooper, legal fellow at the National Center for Public Policy Research and co-chair of Project 21, appeared on Fox News Channel’s “The O’Reilly Factor” on 1/24/17 to explain how President Trump can legally intervene in Chicago.

“Absolutely the Feds can do this,” Cooper began. “There has been a wholesale failure on the part of the state and local community to address this really serious problem. I don’t know another word besides ‘carnage’ to describe the devastation that’s been taking place.” 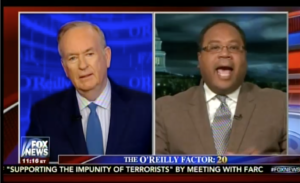 So how can President Trump legally intervene in Chicago without stepping on state and local authority?

“He sends a Justice Department directive that says to the U.S. attorneys in that jurisdiction, in Cook County, that they are going to work directly with the prosecutors. They are going to have the FBI and local law enforcement work together, and they’re going to pick which cases.. that they’re going to prosecute directly. This doesn’t require a change in law, this simply requires will.”

“In any bank robbery case the Feds are able to step in, in any kidnapping case they’re allowed to step in,” said Cooper, referring to federal crimes. Local murder isn’t a federal crime, “so what you do… – and we’re seeing these numbers overwhelmingly in Chicago – you say, ‘if we find an instance when you’re a felon and you’re in possession of a firearm, you’ve now got a federal beef. We’re going to take those prosecution cases.’”

Cooper also believes those convicted should be sent to federal prisons, probably not even in Illinois, since state and local courts and prisons have been quick to release convicted criminals.