ConservativeBlog.org
Posted at 16:55h in Blog, Project 21 by David Almasi

@horacecooper ~ Horace Cooper is one of the most sensible, logical men I’ve ever heard speak! The black community needs to hear his message!

As this tumultuous NFL season heads into its seventh week, its fans – or ex-fans, as the case may be – will likely continue to lose interest in the sport.  Some radicalized professional football players are expected to continue to kneel during the National Anthem.  Compounding the problem is that NFL Commissioner Roger Goodell has expressed a desire for the players to stand while apparently being unwilling to enforce what he and most owners seem to want.

It’s an odd situation considering that the league has strictly regulated things such as helmet decals and touchdown celebrations in the past.  Colin Kaepernick, the former quarterback who was the catalyst for this controversy, was fined $10,000 in 2014 just for wearing the wrong brand of headphones to a post-game press conference.

When it comes to a protest seen by many as a direct attack on America and what the nation stands for, however, the NFL is apparently unwilling to make any sort of policy – for or against kneeling and related acts.

The controversy is hurting the NFL directly, but the effects are becoming far-reaching. 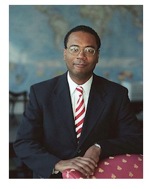 Over the last two weeks, Project 21 Co-Chairman Horace Cooper has gone head-to-head with Leo Terrell, an attorney in Los Angeles, on the Fox News Channel program “Fox News Tonight.”  Both times, Horace has driven Terrell to fits of screaming and yelling as he hammered home the points that these protests are offensive to the clear majority of NFL fans and have no place in the workplace that is the gridiron.

In their October 18 match-up, addressing what he called Goodell’s “incomplete pass” in trying to stop the NFL’s current death spiral, Horace said:

Americans across the board reject this behavior as disrespectful, and now we’re going to see the trend continue of fewer viewers, fewer ticket-buyers and fewer supporters for the NFL.

In response, Terrell said players aren’t obligated by their contracts to stand.  He claimed viewers and spectators are also not always respectful when the National Anthem is played.  While his claim about the behavior of the fans was anecdotal, Horace noted about the players’ protest:

They can’t even give us a specific and detailed outline of their critique.  If they wanted to have that – they can do it on their time.

Pointing out he sees the National Anthem protests as intentionally disrespectful toward the United States, he added:

[W]hy did they pick that time to make this expression?  They did it precisely because they wanted to hit us in the jugular and claim that America – our nation, which we honor with the flag – that is the reason they are attacking it.  That’s wrong.  That’s disrespectful.

While the NFL may be losing its fans, it appears that Horace’s following is growing.  Twitter lit up after his appearance.

LeoTerrell-Out of control.Angry.Agressive.Illogical.?. Thank you Horace Cooper for being the voice of reason.

Thank u #HoraceCooper for having the patience to keep ur cool when debating loud mouth Leo. Your level headed rational debate was excellent

We could care less about collective bargaining agreement @trish_regan @horace_cooper You are 100% correct Horace ??????

That debate between Horace and Terrell was the rematch of the two attorneys.  They debated each other one week earlier on the pretty much the same issue.  At that time, Goodell was floating a trial balloon about his own desire for players to stand, while Jerry Jones – the owner of the Dallas Cowboys – was adamant about his team doing so.

That next Sunday, the Cowboys did all stand during the playing of the National Anthem.  In this October 10 debate, Terrell asked what constitutes disrespect and bemoaned a situation where he thought players were being forced to choose between using their status to protest alleged racial injustice and being paid.

Saying that players “should honor the greatest country that has given them an average of $2 million a player,” Horace added:

Horace was right. He also was not trying to censor anyone.Gameday=workplace. Keep the issues outside of work & not offending paying customer

While protestors are portraying themselves as modern civil rights crusaders, Horace showed how disapproving fans are the ones more in line with the methods of the Civil Rights Movement.  He noted how civil rights activists a half-century ago succeeded by encouraging others to express their dislike for institutionalized inequality to bring about societal change.  Fans opposed to National Anthem protests today are registering their disapproval by boycotting those perpetuating it – and to great success so far:

We get the right to also choose whether we are going to watch something we don’t like.  In overwhelming numbers, we’re watching the American people say, “we don’t like what you’re doing and we will not participate.”  That’s as American as apple pie!

@horace_cooper just saw ya on @foxnews! You rock my socks! Give em hell! <3

Of course, it’s not just Leo Terrell who disagrees with Horace.  While Twitter posts have been quite positive of Horace’s appearances, there are critics.  And, as it usually seems for black conservatives, the critics often go low.

@horace_cooper just saw you’re appearance on @FOXTV . I’m not black, but I am embarrassed for you.

But they are small in number.  And the NFL crisis continues at their peril.