Posted at 19:39h in Articles by David Almasi 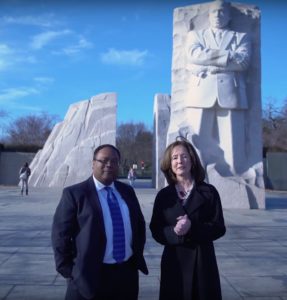 Most people honoring the holiday for civil rights icon Dr. Martin Luther King, Jr. will do so with humble, quiet reflection or charitable acts of community service. This year, congressional liberals used it to demonize the tax reform plan recently enacted by President Donald Trump and promote an agenda likely to grant amnesty to scores of illegal aliens. This crass display of politics was condemned by the National Center’s Project 21 black leadership network.

Project 21 Co-Chairman Horace Cooper spoke about this and other issues with Daily Signal Senior Contributor Genevieve Wood at the King Memorial in Washington, D.C.

Speaking specifically about the liberal lawmakers’ “teach-ins” against tax reform, Wood suggested that “[t]o go tell black Americans why this is actually a bad economy for them [is] the complete opposite of all the numbers and evidence.”

Here’s the irony. What the left wants to tell black America is: “Who are you going to believe, them or your lying eyes?” If you want to look at your bank account, if you want to look at the value of your home, if you want to make that the test, then you’ll look and you’ll say, “Wow, the news is amazing. My uncle, my cousin, even my next-door neighbor, they’re getting jobs that they didn’t have.”

A record two million fewer people are receiving food assistance under the Trump Administration than before. But it is also not a surprise to me.

Here’s the thing: When you look at Martin Luther King, most people remember the “I Have a Dream” speech. What they don’t recall is that the main reason for the big rally [in 1963] at the Lincoln Memorial was a jobs program.

Black Americans were worried and concerned that there weren’t a lot of great economic opportunities. And that’s how this [1963 March on Washington] got organized. The essence of what black America and the civil rights effort was about was letting people be able to get the kinds of things that control their own lives.

Commenting on how the teach-ins betray the black Americans who have been such a loyal constituency to liberal politicos, Horace added:

Oh, it’s a classic bait and switch. A beautiful bait and switch. When you don’t have a good program for people – by program, I mean a policy initiative that would be good for them – what you do is you find something to distract them.

Meanwhile, what they don’t say is “By the way, we do have a program, not for you, [but] we have a program. It is primarily focused on illegal immigrants. And in fact, even as late as today, the talk is we’ll shut the government down if we don’t get the ability to get the illegal immigration support policy changes that we want. Hey, black America, look at the teach-ins, that’s what we’ve got for you; but for our new favored class, we’ve got real policy changes that are designed to improve and make their livelihoods better.”

Conversely, speaking about the current economic state of affairs under Trump, Horace noted:

Black American unemployment typically is somewhere between 40 percent – and even 100 percent higher than white America’s unemployment. When this [black unemployment rate] number in 2018 reached 6.8 percent, that was the narrowest gap we’ve ever seen. We saw nothing like that during the Obama Administration.

And it didn’t surprise me, because the policies of President Obama were more focused on handing out food stamps, and assistance and government handouts rather than seeing to it that the most important civil rights of all: your right to be independent, your right to be self-sufficient, [were] being honored with policies of limited government. That’s not Obama’s plan.

Watch Horace’s interview in its entirety: