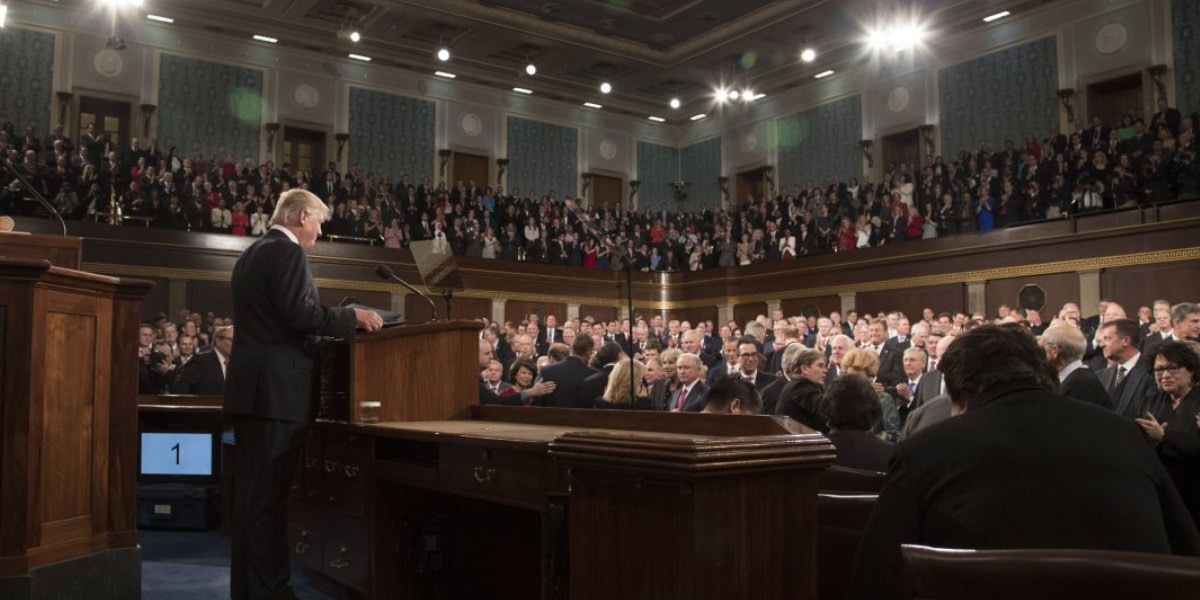 Trump Congratulated on “Well-Written and Well-Delivered Speech” to “Make Americans Freer, Happier and Even More Prosperous”

In tonight’s address, President Trump spoke of a “new American moment” in which “[t]here has never been a better time to start living the American Dream.” He touted the approximately 3 million workers receiving bonuses tied to his tax reform package as well as his desire for “every American to know the dignity of a hard day’s work.” He also said: “Americans love their country, and they deserve a government that shows them the same love and loyalty in return.”

During the address, which touched on divisive issues including immigration, taxes and national security, President Trump asked lawmakers “to set aside our differences, to seek out common ground, and to summon the unity we need to deliver for the people we were elected to serve.”

Here are some of the immediate reactions from Project 21 members about the President’s speech:

“Tonight, President Trump reminded us that – by following the principles of freedom and liberty – America has experienced unprecedented growth that includes the lowest black unemployment rate in a generation, the fastest stock market growth in decades and GDP growth not seen in recent times. While major challenges remain, his stewardship over the last year makes it clear that we can build on these achievements and make Americans freer, happier and even more prosperous.”
– Horace Cooper, co-chairman of Project 21, a former leadership staff member in the U.S. House of Representatives and former constitutional law professor.

“President Trump wasn’t just presidential tonight. He highlighted the accomplishments of his first year while calling attention to our desperate need for bipartisan legislation to solve systemic problems facing the nation. At crucial moments, however, liberals failed to rise to the occasion – often withholding their applause or approval. Why wouldn’t liberals cheer on the lowest black unemployment rate in 17 years? Or the President’s resolve to eradicate the scourge of MS-13 killing innocent Americans?”
– Stacy Washington, co-chairman of Project 21, a syndicated talk radio host on the American Family Radio and Urban Family Talk networks and a U.S. Air Force veteran.

“President Trump’s State of the Union address tonight showed a president transitioning into the role of Commander-in-Chief. The country is currently very divided, and this speech went a long way in trying to repair that divide. I congratulate President Trump for a well-written and well-delivered speech.”
– Christopher Arps, Project 21 member, a principal with Red Tail Strategies and co-founder of the Move-On-Up.org black social network.

“With a record of helping create 2.3 million jobs, tax reform, historic stock market gains and taking care of our veterans, he’s got a lot of accomplishments. Like him or love him, he’s getting the job done with flying colors.”
– Rich Holt, Project 21 member and political campaign strategist.

“Whether you love him or hate him, President Donald Trump deserves to celebrate – brag, if you will – about his administration’s accomplishments. Yet, when the President brought attention to black unemployment being at historic lows, members of the Congressional Black Caucus remained seated with angry faces – without even a hint or gesture of acknowledging such wonderful news. One would think they would applaud the fact that many of their constituents are now gainfully employed. It shows just how ineffective black congressional leadership is on the left, and drives home the point that President Trump didn’t have to meet with the CBC in order to do for its constituents what the CBC members themselves were repeatedly unable to accomplish.”
– Derryck Green, Ph.D., Project 21 member with a doctorate in theology and spiritual leadership.

“President Trump promised to encourage us with a message that would help build a safe, strong and prosperous America. He delivered! During this speech, he praised our flag, patriotism and religious liberty. This is a message for all Americans, and it instills pride in each of us. The message of the night was good news for every American, and provides reasons why we must live and work together to keep our nation prosperous and strong.”
– Emery McClendon, Project 21 member and a Tea Party movement organizer who won Americans for Prosperity’s “Activist of the Year” award.

To book an interview with a member of Project 21 about the State of the Union address or another nonpartisan issue affecting black America, contact Judy Kent at (703) 759-7476.