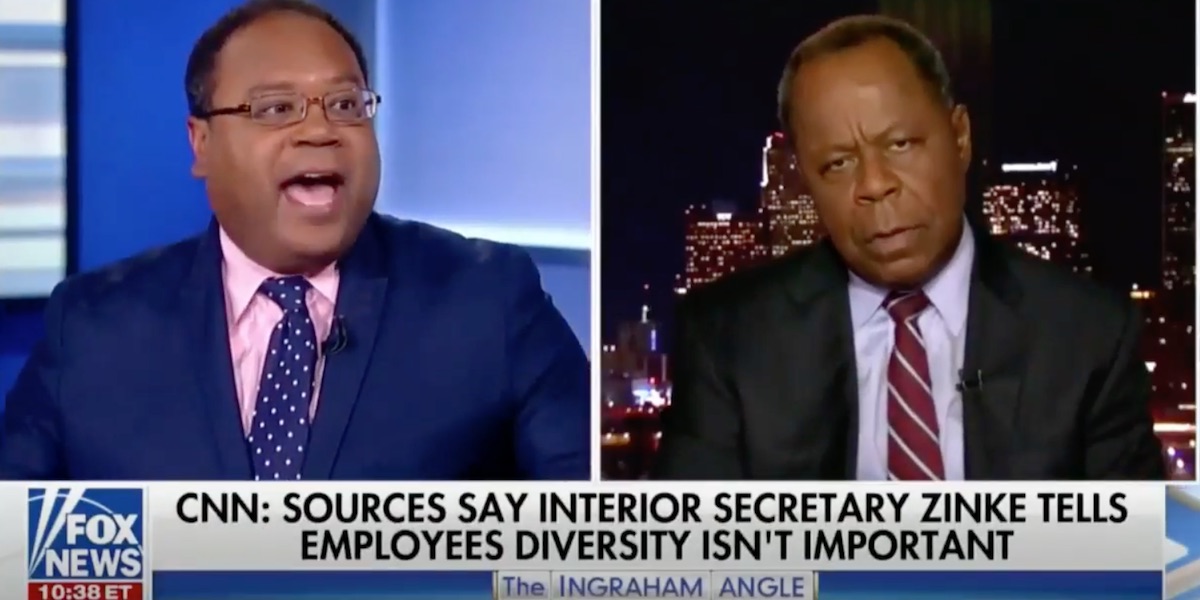 When all else fails, play the race card.

As the nation just humbly observed the 50th anniversary of the death of Dr. Martin Luther King, Jr., it still seems that those who claim to value his teachings the most are nonetheless the ones who act the least interested in the truly colorblind society Dr. King gave his life to help create.

That’s why people like Horace Cooper, co-chairman of the National Center’s Project 21 black leadership network, need to be there to remind them.

On “The Ingraham Angle” on the Fox News Channel, Horace and host Laura Ingraham debated the issue of race, diversity and federal hiring with attorney Leo Terrell.

Zinke was accused of saying that diversity in hiring “isn’t important” and/or not “important anymore.” At the same time, however, he was credited with adding:

Yet, for critics such as Terrell, it’s all about numbers. He said: “[T]his is an administration that does not have people of color. If you’re gonna have some diversity, show me some people of color.”

With Terrell continuing to demand numbers, Ingraham called Terrell out on bean-counting, adding: “[L]et’s not pretend conservative African-Americans count under diversity. They’re ridiculed as Uncle Toms and everything else.”

Putting the whole diversity dust-up in perspective, Horace pointed out there is no proof that Zinke ever made any of the alleged statements. Furthermore, there is plenty of diversity in the federal workforce already.

So here’s the question that Ryan Zinke was looking at: Why can’t we get the most talented people if the taxpayers are paying for these salaries?

In the course of the discussion, several high-ranking minority hires were noted. The fact that many members of the federal Senior Executive Service are minorities was pointed out. Yet Terrell remained unhappy. It begs the question as to what Terrell would accept as constituting diversity – particularly since the last study of the federal workforce showed overrepresentation by about five percentage points.

As the segment wrapped up, Horace proved he has his finger on the pulse of the left-wing diversity assault:

“This quota vision is dividing America.”