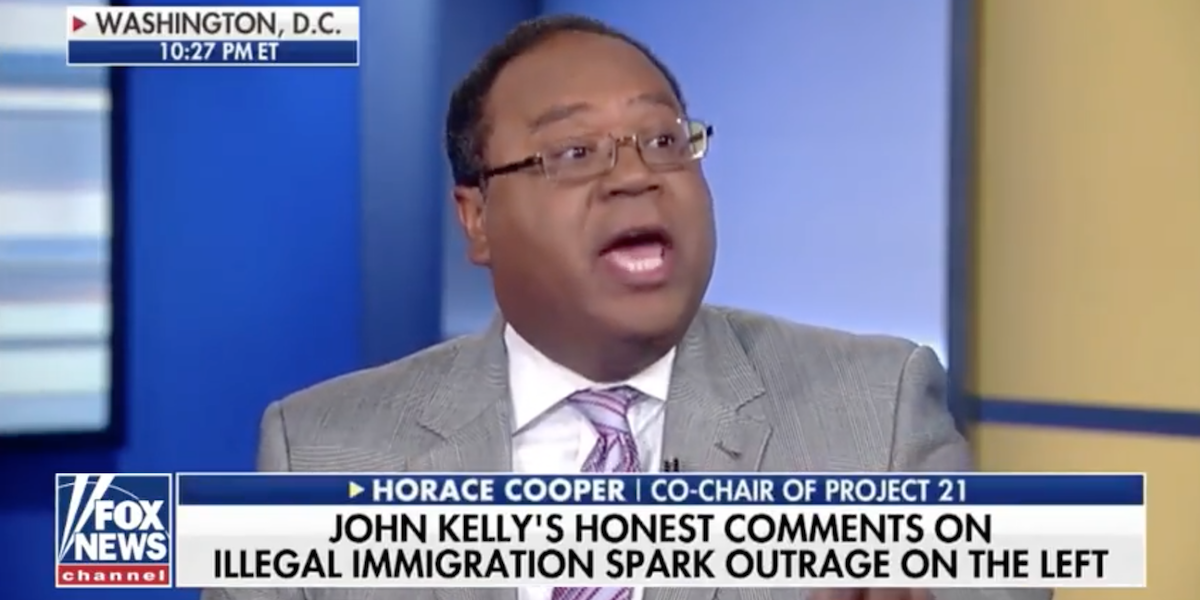 14 May 2018 Left “Marginalizing” Illegal Immigrants, But John Kelly is Deemed the Racist

ConservativeBlog.org
Posted at 20:59h in Blog, Project 21 by David Almasi

In the ongoing effort to sensationalize and demonize the Trump Administration, a rather mundane comment by White House Chief of Staff John Kelly is being called “ignorant” and “racist” by the left-wing media.

Project 21 Co-Chairman Horace Cooper, in an appearance on the Fox News Channel’s “The Ingraham Angle,” pointed out it is actually the left that is “marginalizing” people who are being encouraged come here illegally without the skills they need to succeed in modern American society.

In an interview with National Public Radio, responding to a question about the prosecution of families illegally crossing the border, Kelly replied more broadly about the false promise facing many people entering the United States without permission:

Let me step back and tell you that the vast majority of the people that move illegally into United States are not bad people. They’re not criminals. They’re not MS-13. Some of them are not. But they’re also not people that would easily assimilate into the United States into our modern society. They’re overwhelmingly rural people in the countries they come from – fourth, fifth, sixth grade educations are kind of the norm. They don’t speak English, obviously that’s a big thing. They don’t speak English. They don’t integrate well, they don’t have skills. They’re not bad people. They’re coming here for a reason. And I sympathize with the reason. But the laws are the laws. But a big name of the game is deterrence.

In his appearance, Horace rebutted some of the accusations made by civil rights attorney Leo Terrell. Making his case, Terrell repeatedly sought to link the fact that his mother had an 8th grade education with his own ability to become an attorney and be allowed on Laura Ingraham’s show that night. He did not explain how his mother’s education affected his own or his career choices. He did say that, in his America, “it’s not how smart you are, it’s what you do with that opportunity.”

This is where Horace eloquently rebutted Terrell by pointing out that the great wave of organized European immigration happened under different circumstances than today’s illegal immigration from the south:

First of all, we’re talking about a 21st century economic environment. Not a 18th century. Not a 19th century. Not even an early 20th century. You could get off the boat and not know the language, not have any type of marketable skills – and still succeed.

Referring specifically to the statement made by Kelly about current opportunities, Horace continued:

We are marginalizing these people by encouraging them to come when they don’t have the skills necessary to compete.

Surprisingly, Terrell – a civil rights attorney – smeared the Irish immigrants of generations past as “criminals, uneducated and had a allegiance to the Catholic Church.” The first accusation is derided by others of Terrell’s belief when it is said about today’s immigrants, so it’s odd he would use it as well. The education issue was addressed by Horace. The religious conspiracy? From a civil rights lawyer? It seems oddly similar to a recent story in Washington, D.C. in which a member of the city council blamed snow on a Jewish conspiracy.

Illegal immigration and its effects on the black community are an issue addressed by Project 21 in its new “Blueprint for a Better Deal for Black America.” While the portion of the Blueprint addressing the immigration issue – “Stopping Wealth Transfer From the Poor to Non-Citizens” – is not scheduled to be released until June 25, it is described in the executive summary as recommending “bar[ring] illegal aliens from using public services, except in emergencies.”