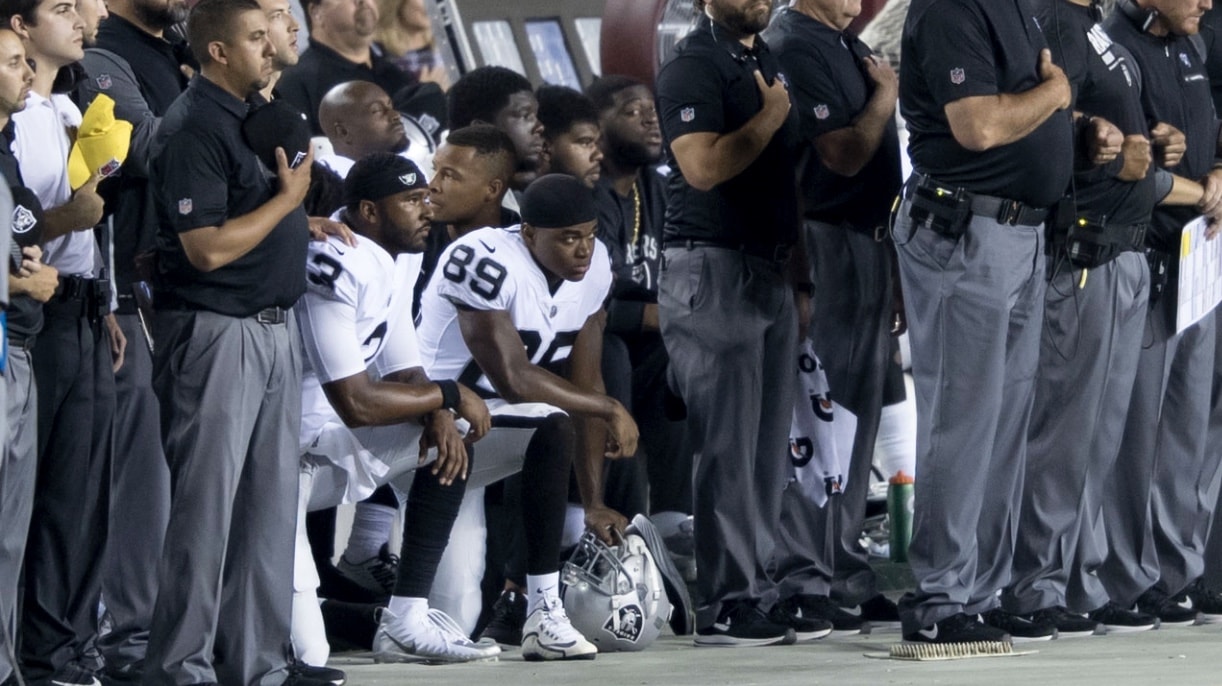 ConservativeBlog.org
Posted at 13:00h in Blog, Project 21 by David Almasi

Professional football doesn’t officially start until September 6, but the pre-season is indicating there will be a fresh new set of protests against the National Anthem, for washed-up player Colin Kaepernick, against alleged police brutality or whatever players think they are protesting.

During the first week of pre-season games, a total of 15 players on five teams participated in some form of Anthem-related protest. Of those, five were overt in their actions by kneeling or raising their fists in a black power-style salute. Others complied with a new policy the National Football League may or may not be enforcing that says players on the field must stand – but those who refuse to comply don’t have to join their teammates on the field during the National Anthem.

But pushback from pressure groups claiming a civil rights mantle and the players’ union has led to a “standstill agreement” for more discussion. It’s an interesting decision, since all the owners reportedly supported the policy. During the last season, the NFL was also afflicted by low attendance, low television ratings, bars not showing games and refunds of pricey cable plans as a consequence of the player protests.

Already this (pre-)season, having seen protests restarting in earnest, a restaurant owner already said he will not show games. Ticket sales are down. Cops in Florida called for a boycott of the Miami Dolphins after players Kenny Stills and Albert Wilson knelt during that first pre-season game. And criticism has come from President Donald Trump to famous coach Lou Holtz to Hall of Fame player Jim Brown.

Project 21 member Emery McClendon, a veteran of U.S. Air Force and a Tea Party activist, sees trouble ahead for the NFL. Not only does he think the protests set a poor example to those who hold professional sports stars in high esteem, but it also shows the negative impact political correctness can have on an important American tradition. Emery said:

For over 240 years, America has been a nation that has strived to take its place in history as a beacon of freedom and liberty to the world. Throughout that time, our nationalism has been displayed at public events – most notably, in recent time, at sporting events.

Our citizens have always been proud of those on the field as they stood and faced our flag when the National Anthem was played.

These days, it’s unfortunate our sports professionals – particularly those in the NFL – choose to protest or kneel during the National Anthem as an on-field demonstration. It’s not a good example for those who respect and look up to them and consider them their heroes or mentors.

NFL owners approved a new National Anthem policy that would require players to stand during performances if they are on the field or to simply remain in the locker room. Could that lead to a double-standard?

The policy is aimed at having the teams show respect or face a fine. Some teams agree that fines are on the table, but also declare that the policy is not set in stone – and that all options are still open. And League management recently hedged on the new policy, while pre-season protests show we are likely headed into another year of divisiveness.

Several sports greats have spoken up about the issue. One of them is Jim Brown, formally of the Cleveland Browns. He has stated he would never kneel during the National Anthem, but that he recognizes the players’ right to protest. Brown speaks as a person who highly respects our flag and our country.

Politicized civil rights groups have also weighed in on this matter, urging the NFL to reverse their stated rule.

It would seem as though we are in the midst of a dilemma as the new season rapidly approaches. And it remains to be seen who will be the victor. Will it be the players or the League?

There’s a lot more at stake than egos. We stand to lose yet another great American tradition due to political correctness.