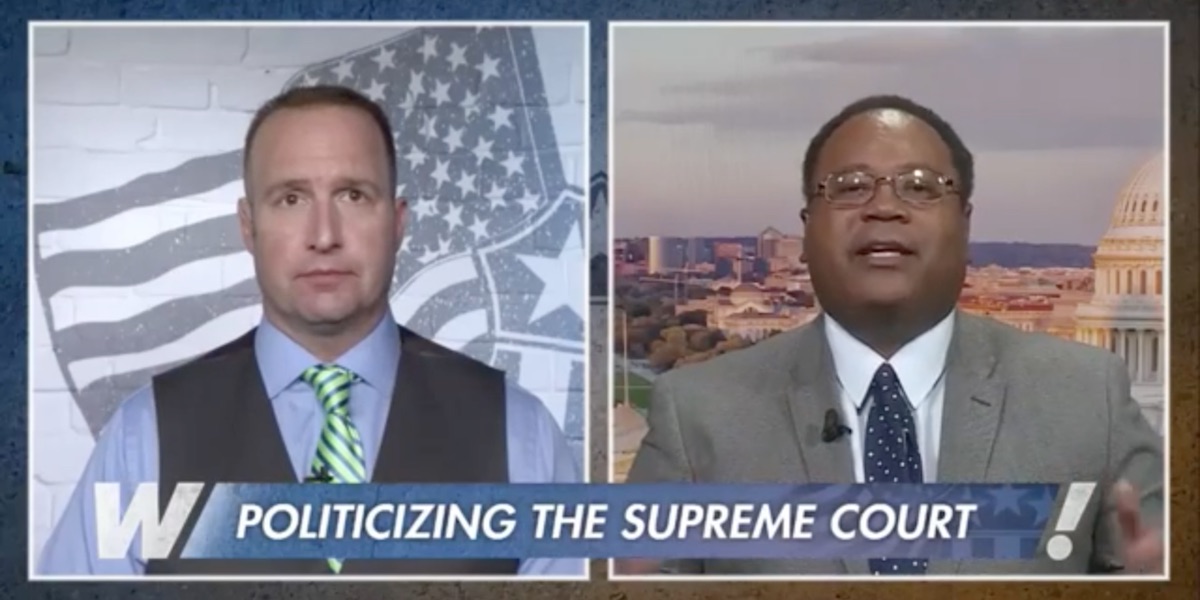 In his analysis of the brutal Brett Kavanaugh confirmation battle, Project 21 Co-Chairman Horace Cooper told CRTV host Andrew Wilkow that liberals are “not committed to the rule of law.”

Horace, a former professor of constitutional law and senior counsel to congressional leaders, said the way Senator Diane Feinstein and other left-leaning members of the U.S. Senate acted during this latest set of Supreme Court hearings and subsequent vote was “completely disingenuous.” Their attempted manipulation of the process, he explained, seemed to indicate they don’t feel bound by the constitutional limits the justices they confirm are charged with protecting.

After Justice Kavanaugh’s first day on the Court, and with threats of his impeachment by angry liberal lawmakers already being leveled against him, Horace appeared on “Wilkow!” to detail just how the methods of judicial selection and confirmation have been politicized by the left:

It is unbelievably remarkable for them to stand and say they are upset that Brett Kavanaugh was only confirmed with a simple majority when they’re the ones who set up the rules… changing the number [of votes needed] to confirm judges.

It is remarkable how, when Neil Gorsuch was nominated, and Neil Gorsuch was replacing Antonin Scalia – which would have had almost no change ideologically to the Court – they insisted that it was the end of the world as we know it and that they would fight tooth-and-nail, forcing the moderate senators – including John McCain – to agree to change the system…

Besides the vindictive and angry protests against the process, Horace addressed the suggestions that Kavanaugh face immediate impeachment because of alleged perjury committed during his confirmation testimony. Horace dispelled the threat, pointing out the claims made against the new justice, when looked at rationally, should not rise to the level his critics claim they do:

If the federal government is wishing to prosecute you for a falsehood, that falsehood can’t be a misunderstanding, a disagreement or a difference in interpretation. It actually has to be two things: relevant and material.

If you get asked “did you have coffee this morning?” and you’d forgotten that you had coffee this morning and you say “no,” it then needs to be relevant. Why is this question being asked?… Most of the time, when you’re talking about a perjury issue, you’re going to be talking about specific data points. A date. A particular activity. A particular responsibility. A particular legal act. Did you plea on a certain day? Were you in the country on a certain day? These kind of things.

But they have to be material. You can’t bring a person up and say “hey – I’m gonna ask you a bunch of questions,” and if any one of the questions I ask you turns out that I can show that somehow it’s inaccurate, you still can’t get a perjury charge…

During the Kavanaugh confirmation, the case made against him moved from his beliefs to character allegations from 36 years ago (before they went to demeanor, claims of a irreparably damaged nominee to a post-vote suggestion that the Senate is inherently unfair in its design). But the pivotal moment came during the weeklong pause to have an FBI investigation into the decades-old claims against him.

Wilkow brought up how some senators tried to downplay concerns about politics dominating the process by saying confirmation was like a job interview – while many of these opponents simultaneously appeared to want to make the process akin to a criminal prosecution. Horace noted this double-standard was a losing strategy:

Well, you can’t have it both ways. On the one hand, they absolutely treated – and they insisted – that the best way for this whole issue to work out is that we open up a criminal investigation.

By the way, the FBI doesn’t just do random investigations. They typically do criminal investigations. They, however, under statute, when it comes to background checks, they have the authority to vet particular individuals and information that they provide. But that’s on the one side – even though the left continually argued that they were insisting that the FBI engage in its investigative powers. I even heard several senators say that they should be able to issue subpoenas as a way to get it. That goes well beyond a background check, and it sounds a lot like a criminal investigation. Commenting on how the left is trying to twist the narrative in their favor, Horace added:

There’s a special appropriation fund specifically to give the… Senate Judiciary Committee investigators funding so that professional, trained investigators are able to go out and do the kinds of background checks and investigations that are necessary in order to make a recommendation to committees.

The truth of the matter is, when Democrats ran the committee, they understood and used these investigators. Even when Clarence Thomas was being considered – during his confirmation battle – Chairman Joe Biden oversaw a team of investigators who worked hand-in-glove with information that they received from the FBI to follow-up and make sure it was properly synthesized and everyone had the information that they needed.

For Diane Feinstein to claim she’s unfamiliar with this, unaware of this, is just completely disingenuous. It called into question the real serious concern about whether she had knowledge of her staff or anyone else leaking this letter. If you’re going to tell me that you don’t know something that I know you know, it makes me doubt you about something that I might know about that you say you know about.

When Wilkow asked about the practicality and possibility of an impeachment of the new justice, Horace was blunt, pointing out the folly of the threats:

No – absolutely, they cannot. And, in fact, they don’t actually want to be bound by the terms of the Constitution.

Here’s what they wish to say. A material, relevant criteria to be a Supreme Court justice is that you were never, ever intoxicated at any point in your life. Now, if they wish to make that claim, they’re free to tell the public, but they can’t find anything like that in the Constitution.

My point earlier – discussing perjury – there just is no materiality or relevance to whether or not he had two beers or five beers or even seven beers at any one given time. For them to go forward is to show that they do not accept the normal process of the American constitutional system.

What we do is we bring forward a name. The Senate gets to advise and consent. If that justice, during the time of their service, is determined to have not acted with good behavior, that person can be removed.