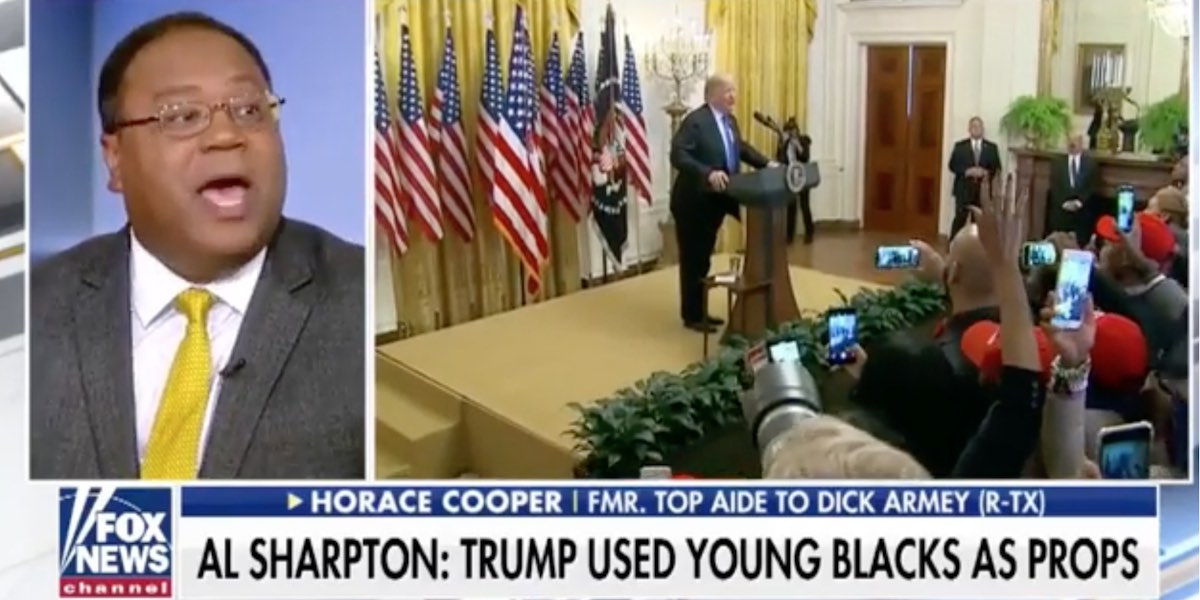 Project 21 Co-Chairman Horace Cooper is challenging Rev. Al Sharpton’s apparent belief that the Reverend and others on the left have a “monopoly on outreach” when it comes to black Americans. In a Fox News Channel interview, Horace added that what Sharpton actually seems to have is a “monopoly on the use of bigoted and racist remarks” with relative impunity.

Last week on MSNBC, Sharpton used a gathering of black conservatives to criticize President Donald Trump. He said that the President, who addressed a contingent of young black conservatives – including Project 21 member Adrian Norman – at the White House, was using them as “props.” Despite the enthusiastic responses from those at the event, Sharpton claimed it was an “insult” for those blacks to have been there.

Discussing Sharpton’s divisive comments in a one-on-one interview with Fox News Channel host Laura Ingraham, Horace chronicled the MSNBC host’s history of toxic racial rhetoric and how he is absolutely wrong on the notion of black political unity:

He didn’t just attack Kanye West and other moderate blacks. He’s attacked gays. He’s attacked Asians – both Chinese and Koreans. It’s his vile language that refers to people who are Jewish as diamond merchants. These are the kind of comments that a man like this makes, and then he wants to stand up and say he should be the arbiter of what constitutes racism and what doesn’t.

My group – Project 21 – was created precisely because we want to make sure people understand that black Americans aren’t identified by our skin color. We all have individual views…

He’s none of these things. He’s just a bigot.

Horace also highlighted the hypocrisy in Sharpton being allowed to pass judgement on others when he is a prominent practitioner of the politics of division:

Here’s the guy who’s the poster child – not for a dog whistle, for coming right out and using the most vile and bigoted remarks. And he targets people all the time.

When it was Don Imus, who came on [Sharpton’s] program and wanted to apologize for a bigoted remark he had made, [Sharpton’s] response was you can’t be a purveyor on the national airwaves if you’re making comments like this. And yet there he sits on MSNBC.

It was very refreshing to listen to Horace Cooper speak. He is a very wise man. I wish Al Sharpton would take notes.

Interestingly, this same Twitter user also took his advice directly to Sharpton and his followers:

If anyone of color no matter what color you are want to learn from a wise black man (a real man) go and listen to Horace Cooper with “projectt 21” he speaks with his heart not with nonsense like Al does.

Be sure to WATCH the rerun if you missed the great, informative interview??

Be sure to follow this advice and watch the entire appearance below.