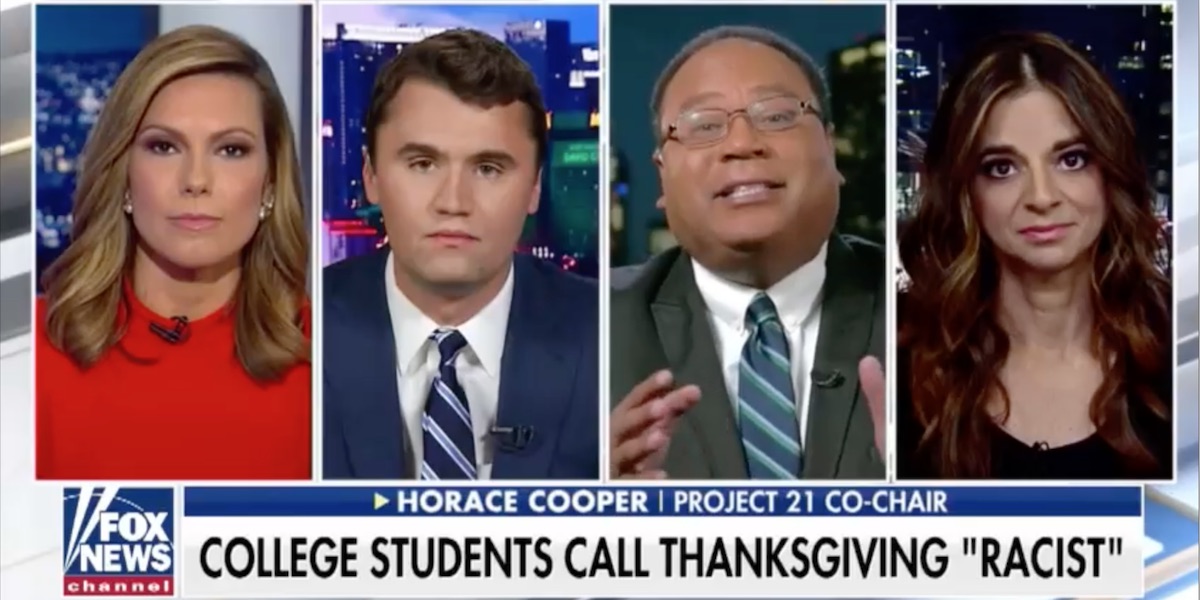 As is increasingly common, our nation’s traditional day for the appreciation of family, freedom, good fortune and food is under siege by the joyless few who seek to cast our society as racist to the core. Project 21 Co-Chairman Horace Cooper, in a pre-holiday appearance on the Fox News Channel, referred to this and the ongoing campaign against Chick-fil-A as liberal attempts to exercise a “heckler’s veto” over the rest of America.

Horace joined a panel discussion on “The Ingraham Angle” about a Campus Reform video in which college students were quick to call Thanksgiving “racist” because of the alleged exploitation of American Indians and a “celebration [of] ongoing genocide.”

Panelist Cathy Areu attempted to justify that young people “believe” the allegations against Thanksgiving in part because the “Addams Family Values” movie – a work of fiction as well as a theatrical flop released seven years before most current college freshmen were born – “did make that point.” Areu failed to mention that particular scene also advocated revenge-motivated mayhem, arson and possible cannibalism as well, but we won’t go there right now.

In explaining the true meaning of Thanksgiving and the harm liberals are trying to inject into it, Horace said:

It’s really sad when you hear people that live in a country where they are blessed in so many special ways, and it’s a time that we would normally think of… Let’s see family. Let’s see our loved ones. Let’s take some time to be thankful for the great things that are going on. In fact, it’s even a time to reach out to those who aren’t doing so well.

What it’s not a time to do is… this idea that people are sitting round gloating in some way, or that people are wondering about what happened 250, 350 years ago to which group and that kind of thing.

This is uniquely a time when our country acknowledges how appreciative we are with the things that have been accomplished in our lives and in this country. This is what Thanksgiving is about.

The panel then talked about how administrators at Rider University in New Jersey passed over Chick-fil-A for a potential spot on campus because – they claimed – the very popular fast-food chain’s “corporate values have not sufficiently progressed enough to align” with those of university leaders. It was reportedly the overwhelming choice of the students.

Chick-fil-A has been branded as “hate chicken” by some because of the views of some of its founders and top executives about marriage and sexuality issues. But the chain says it “treat[s] every person with honor, dignity and respect — regardless of their belief, race, creed, sexual orientation or gender.” In 2018, Chick-fil-A ranked first among fast food customers participating in the American Customer Satisfaction Index’s Restaurant Report.

Calling out the petty discrimination against Chick-fil-A on the part of the university, Horace said:

What we’re seeing at a university when it does something like this is it’s no longer teaching young people that they need to understand and be tolerant of different perspectives.

And they are also saying, if you are a young person or even a faculty member who happens – as I do – to enjoy Chick-fil-A and the services and great products that they provide, that these people shouldn’t get any voice? They should get any expression of the positive feelings they have about it?

It’s really, really a narrow-minded act of intolerance to say “No, we can’t have Chick-fil-A – not at this university” all because a few people – most of them on the faculty – just don’t like the particular political views of a few members of the executive board over at Chick-fil-A.

If America’s gonna be run like that, then you’re gonna have to stop shopping at the mall, driving cars – all kinds of things – once we start digging into what the executive board of a given corporation thinks about an issue.