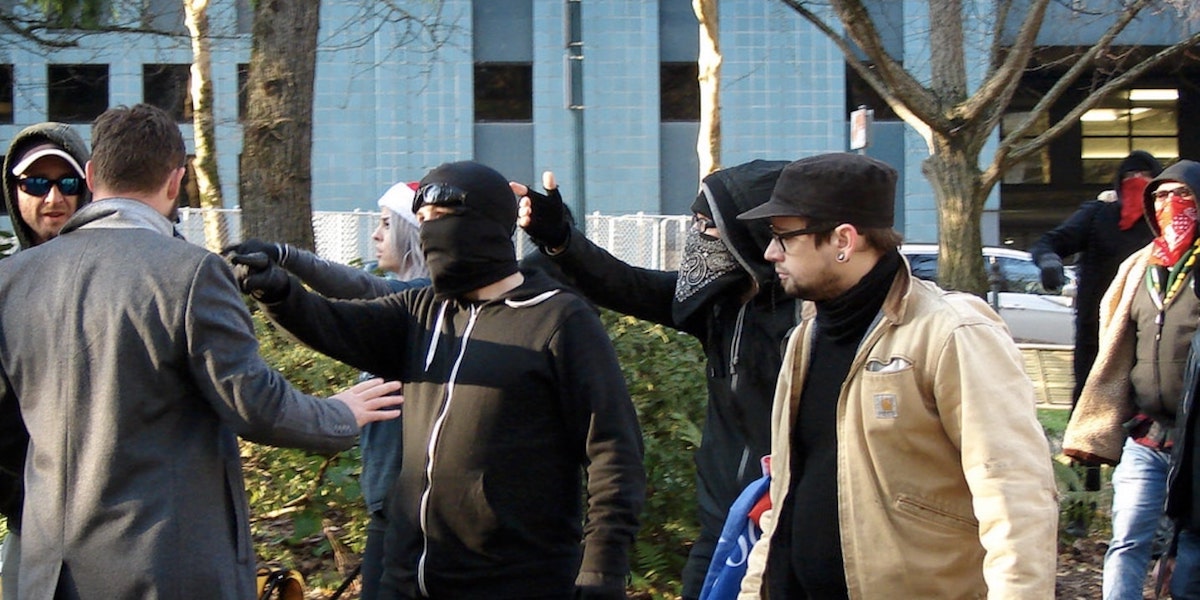 Once upon a time, protesting meant something. It was more than getting attention from news anchors, parading around with signs and somewhat clever chants or slogans, and “sticking it to the man.” The protests of yesteryear, say during the time of Martin Luther King or Gandhi, were about making a difference by confronting the opposition head-on, while bringing attention to a movement.

There was a sophistication and a logic applied to protesting that had been developed to accomplish goals. And all without trying to meet those with an opposing view with fists or weapons. Imagine that! Then, nonviolent engagement undergirded protesters’ actions.

We have come a long way since then. Who would have thought that a group viewing themselves as being opposite of fascists would show fascist-styled behavior when desiring to protest others that they consider to be fascist or the enemy.

In a recent piece, the National Review‘s very own Kevin Williamson gives a report of a march by Antifa members that was very much anarchic and devoid of anything peaceful. The ideology of this group may be argued as being something as nonviolent at its core. However, they have been (and continue to be) violent in the outward expression of their beliefs.

Even when others march and yell out their beliefs, they will still desire to stay within the law. This is of no real matter to Antifa. If you are constantly trying to “fight fascism or racism” (or whatever angers them lately, i.e. anything that conservatives hold dear), then why the need to hide one’s face behind a mask?

King, nor Gandhi, their followers, or their fellow activists did not parade around in masks. They wanted to be seen. Many times, they marched lawfully and with support from local or national governments. From what was written in Williamson’s National Review piece about what took place in Portland, Antifa members dismissed the demands of local law enforcement and political leadership.

In addition to being anarchists, Antifa members reveal how lost they really are. Williamson ended his piece by telling how he unknowingly ended up leading a group of protesters. That is how ignorant they are of their own beliefs and allies; they can end up following a conservative who just so happened to be writing an honest report about them.

Any ideology that goes against the status quo can be dangerous. Antifa is dangerous not only because of their ideas, but because they will use anarchy and confusion as tools against anyone that opposes them. Unlike protesters of old, they do not see the need to make an impact on politicians and change laws. They believe in bending people to their will.

Project 21 member Jerome Danner, a graduate of the University of West Georgia, currently works as a middle school teacher. He can be reached on Twitter at @DannerJerome. This piece was originally published by Western Free Press.