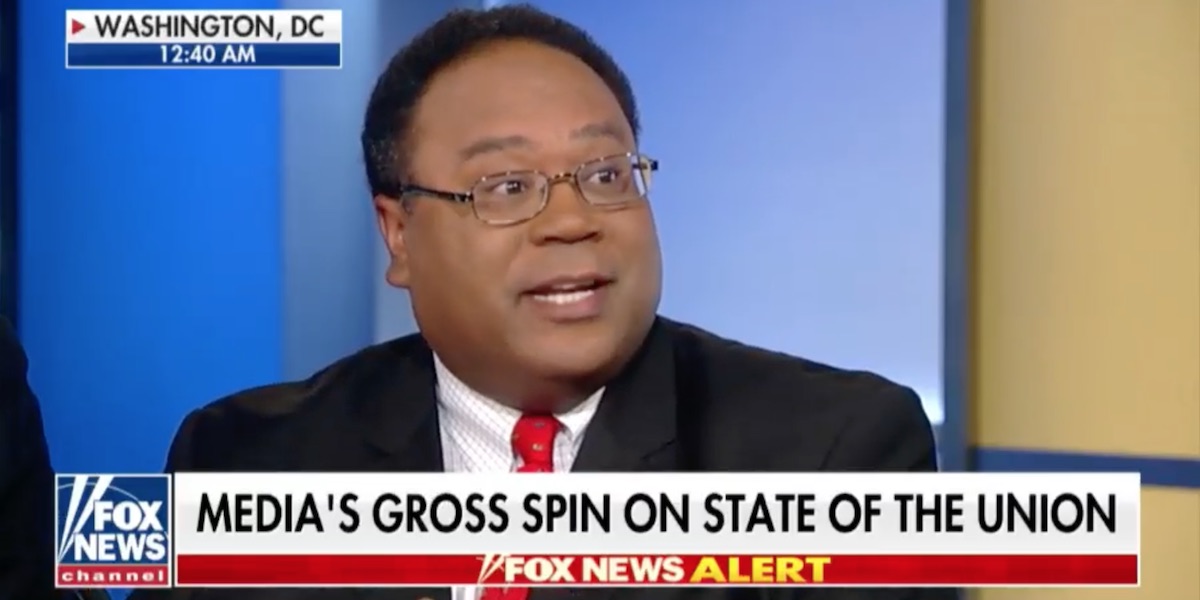 A CBS News poll conducted just minutes after President Donald Trump’s State of the Union address found a staggering 76 percent approval for what respondents heard. Yet, over at CNN, political commentator Van Jones was reviewing it as “psychotically incoherent” and mysteriously full of “cookies and dog poop.”

This, by the way, is the same Van Jones who – when President Trump pushed for and later signed the First Step Act into law – called the criminal justice reform measure “unbelievable” and said that the President “stood up” and “has got to get the credit” for something a lot of liberals loved (notsomuch at the National Center’s Project 21 black leadership network).

As part of a post-SOTU panel discussion on the Fox News Channel which examined the media response as much as the address itself, Project 21 Co-Chairman Horace Cooper remarked about Jones:

I actually don’t know what speech he watched.

I mean, it’s remarkable. One, he got a chance to work with this president – and they did a lot when it came to criminal justice reform.

But tonight’s speech was probably one of the best speeches the President has delivered.

Yet grumpiness and contempt seemed to be the overall response of most liberals. After all, Senator Kamala Harris deemed the address “insincere” before it was even given.

During the President’s address, she and her liberal colleagues in both the House and Senate largely refused to clap for a myriad of things that should have made people happy or at least should have earned the support of people across the political spectrum:

The lone exception seemed to be Senator Joe Manchin. And the CBS News poll seems to lend credibility to an assertion that unity is appealing.

The liberals’ bad attitudes did not sit well with Project 21 member Emery McClendon, a veteran and Tea Party organizer. He said:

As I watched the President deliver his second State of the Union address, I could not help but admire his love for our country and his desire to keep America great.

In stark contrast, liberals showed their true colors. They displayed particular disdain for minorities and working class citizens when they chose to not applaud for the issues that affect them the most. These liberals may tout themselves as being for the average citizen, but they refused to show any actual public concern for those citizens’ gains during this important event.

When President Trump used his speech to honor the military and our veterans, too many liberals failed to respond with applause. When he mentioned the successes of lower unemployment numbers and fewer people on food stamps, his critics once again remained silent. They should have been proud for the thousands of Americans who have been lifted up out of government dependency and are now taking on personal responsibility.

When ICE was praised for its victories in fighting drug dealers and sex trafficking, liberals sat on their hands and failed to show any enthusiasm. This is yet another issue that affects Americans and should draw a welcomed response. Why aren’t they happy about our progress?

Working together, we can achieve the goals that will refresh the American Dream and rebuild our legacy of greatness. But it will require a joint effort from those who represent us in Washington, D.C.

This sentiment was echoed by Horace during his appearance on “The Ingraham Angle.” Horace praised the President’s effective use of invited guests to make his points, and also for having a “generous affection” for America that is evident in speeches like his second State of the Union address:

This is a man who loves this country. And his infectious love of this country allowed him to weave a narrative using the lives of real Americans.

This was quite Reaganesque – how he was able to build this narrative. And it’s something that you can’t do without a generous affection for your country.