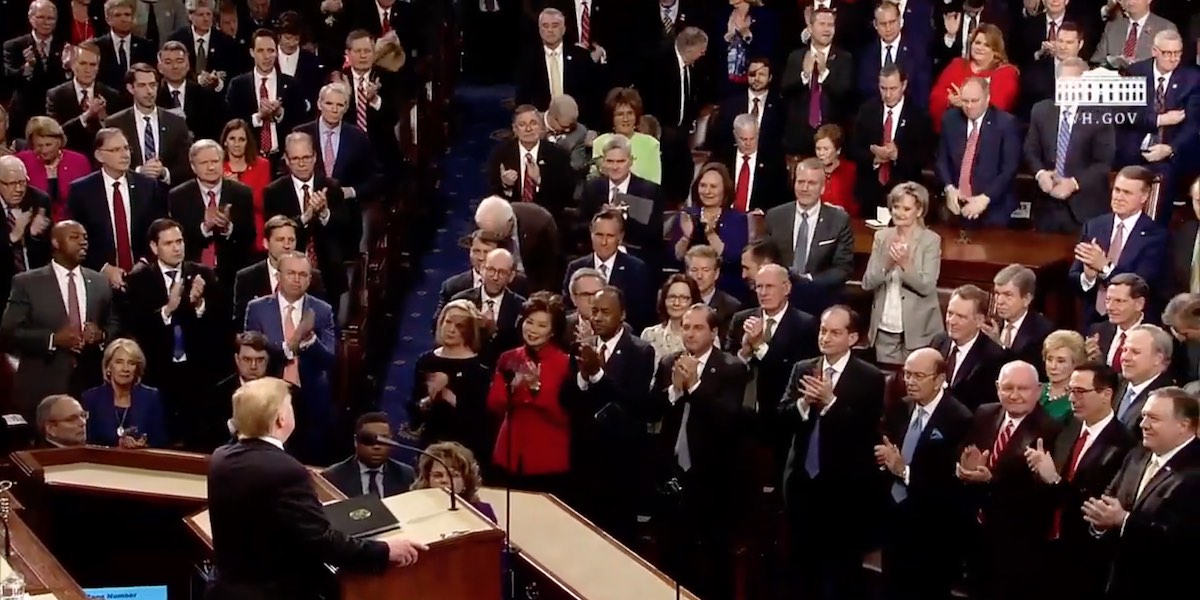 Themes of Unity and Strength Commended by Project 21 Members

Washington, D.C. – Calling it “a time of much-needed unity” and a show of “amazing leadership,” members of the Project 21 black leadership network are praising President Donald Trump’s State of the Union address.

“Tonight, President Trump reminded the American people of who we are and who we are not,” said Project 21 Co-Chairman Stacy Washington, a national radio talk show host. “We rescued other nations from murderous tyrants then and refuse to bow down to the terrorists who seek our destruction now. We are not socialists or practitioners of infanticide. President Trump even got the entire chamber to chant ‘USA.’ It was a time of much-needed unity.”

For over a quarter century, Project 21 has been a leading voice of black conservative opinion. It has also consistently offered post-SOTU commentary for over a decade. “This was an exciting speech. President Trump continues to show amazing leadership and love for America and devotion to her people. I love that he is fearless in his faith and support for human life,” said Project 21 member Dr. Day Gardner, the president of the National Black Pro-Life Union. “It was rather comical that many liberals in the chamber couldn’t even stand when the President said we have a great country, or when he talked about those who were lifted off food stamps or rescued from sex traffickers. We should all be able to feel good about those things. The President’s critics seem very petty and childish to the point of hilarity.”

During much of the address, President Trump focused on his administration’s accomplishments. This included discussion about reduced unemployment (particularly in the black community), lower taxes and increased economic growth. As he stressed a need for unity, the President called his proposals “the agenda of the American people” and asked people to “choose greatness.”

“Victory is not winning for any person or party. Victory is winning for our country,” said Project 21 member Nadra Enzi, a community safety activist in New Orleans. “Tonight, President Trump laid out a unifying message. Time and temperament on both sides of the aisle will determine its prescience.”

“The President’s policies have helped achieve American energy independence. It’s a boon to all of us, but is particularly helpful to minorities who are trying to climb the socioeconomic ladder,” said Project 21 member Derrick Hollie, who is also president of the Reaching America public policy group. “To compound this kind of success, we need to reject the politics of division. It’s not about right- or left-wing views, but what makes sense for a more united America. That’s the line I use to start my podcasts.”

Project 21 recently released the “Blueprint for a Better Deal for Black America,” which offers 57 innovative policy recommendations over 10 key areas for reform – covering issues from educational reform to deregulation to immigration. Project 21 members have met with White House and congressional staff about the Blueprint. Recommendations currently being considered by the Trump Administration include more realistic fuel efficiency mandates as well as work requirements for eligibility in the Supplemental Nutrition Assistance Program (SNAP, or “food stamps”). Commenting on border security, Project 21 member Nicole Bennett, a health care professional who focuses on addiction issues, said: “To ensure the health and safety of minority communities, we must employ a physical barrier in conjunction with expanding the ‘virtual’ border technology that uses radar sensors, enhanced drug detection and artificial intelligence. Black communities are disproportionately affected by the seemingly endless supply of high-purity, low-cost heroin flooding into our country from our southwestern border and the brutal gangs that control the supply and distribution of heroin, fentanyl and other illicit drugs. The health, welfare and safety of our most vulnerable minority communities are being threatened. By strengthening our southwestern border, we are granting black and minority communities a much-needed reprieve from the onslaught of illicit drugs and gangs.”

“The President’s speech was an excellent depiction of past, present and future. From foreign policy to health care to infrastructure, he pointed to bipartisan areas for future success,” said Project 21 member Adrian Norman, a political commentator and writer. “He was tough in calling for America’s rejection of ideologies like socialism, but compassionate in shining a spotlight on issues such as the need for coverage of preexisting conditions in health care.”

“After watching President Trump’s address, I do not know how anyone cannot come away proud of the accomplishments over the past two years of this Presidency. He not only spoke of his own accomplishments, but the accomplishments of the United States as a whole,” said Project 21 member Marie Fischer, a political activist and former candidate for her county school board in Maryland. “I was personally excited when he spoke about school choice – something no other president has mentioned in such an address. He spoke not only of increasing our middle class, but of making it more prosperous. He spoke of policies that had every person in the chamber, including the very far left, cheering for him.”

Additionally, Project 21 Co-Chairman Horace Cooper is scheduled to give post-address commentary on the Fox News Channel program “The Ingraham Angle” at approximately 12:30am Eastern time tonight.

Project 21, a leading voice of black conservatives for over 25 years, is sponsored by the National Center for Public Policy Research. Its members have been quoted, interviewed or published over 40,000 times since the program was created in 1992. Contributions to the National Center are tax-deductible and greatly appreciated, and may be earmarked exclusively for the use of Project 21.
​
Founded in 1982, the National Center for Public Policy Research is a non-partisan, free-market, independent conservative think-tank. Ninety-four percent of its support comes from some 60,000 individuals, less than four percent from foundations and less than two percent from corporations. Sign up for email updates here. Follow Project 21 on Twitter at @Project21News for general announcements. To be alerted to upcoming media appearances by Project 21 members, follow our media appearances Twitter account at @NCPPRMedia.