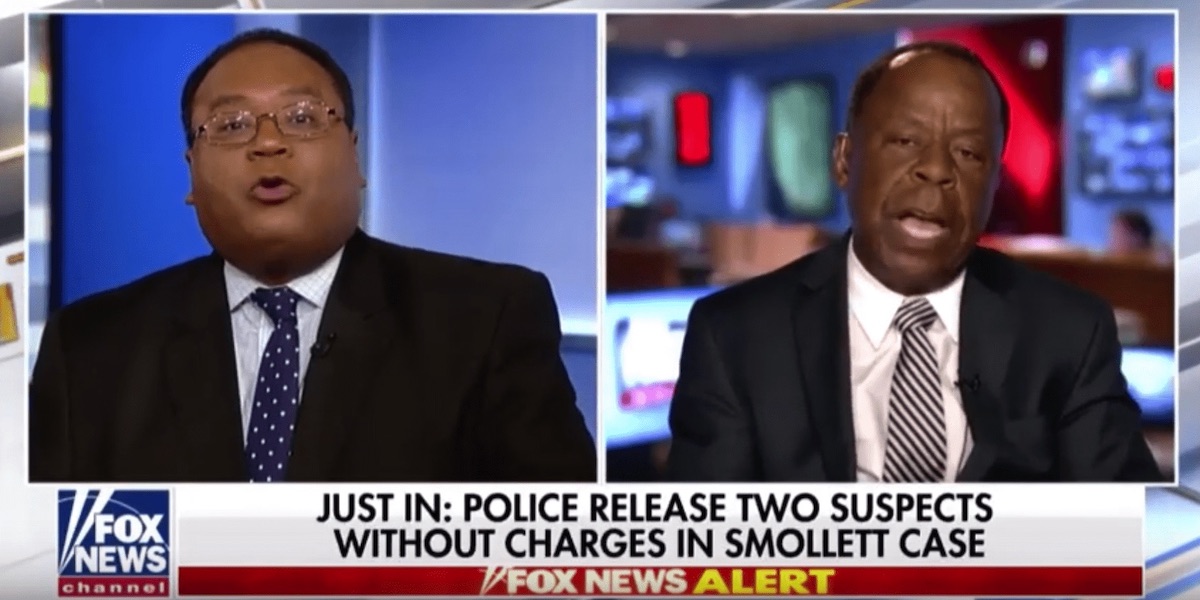 Suddenly the left is all about baby steps and not rushing to judgment.

When actor Jussie Smollett – who is gay and black – claimed he was targeted in a very late-night attack on a cold Chicago street last month because of his race and sexual orientation, the deed was decried far and wide. Adding to the controversy was Smollett’s claim that the attackers wore Trump campaign hats and called the Windy City “MAGA country.”

The reaction to this alleged “hate crime” was quick and certain.

Senator Kamala Harris immediately called it “a modern-day lynching.” Speaker Nancy Pelosi tweeted that it was a “racist, homophobic attack.” Lee Daniels, the creator of the television show “Empire” on which Smollett stars, said it was “just another f—king day in America.”

But, as Project 21 Co-Chairman Horace Cooper pointed out on a recent edition of “The Ingraham Angle” on the Fox News Channel:

This story is not adding up in any way – where it occurred, when it occurred. None of that makes sense…

But what’s most important here is how fast the media decided that this needed to be national news.

Commenting on Smollett’s increasingly cagey behavior and unwillingness to work with the police, Horace added:

And at least you would think that, if we’re gonna give it that kind of credence and that kind of attention – the minimum could be that the alleged victim could present the information that would help the investigation go forward.

Now, as Smollett’s case is falling apart, and it appears he may have actually staged the attack all the way down to having his collaborators purchase red hats, there is reservation and obfuscation among those who used it as proof of our nation’s failings just days ago.

Pelosi, for example, deleted her tweet. Harris later cautioned: “I’m not going to comment until I know the outcome of the investigation.” And there are reports that Smollett’s role in “Empire” is being reduced.

Another liberal pumping the brakes on Smollett speculation was attorney Leo Terrell, who debated Horace on the Ingraham show. In fact, Terrell claimed it was Horace who was rushing – a charge Horace quickly and effectively refuted:

Terrell: Horace already rushed to judgment on whether or not Smollett’s story is true.

Horace: No, I haven’t… I said this doesn’t add up. There are too many irregularities.

Terrell: How do you know that?

Horace: Because I can use reason and logic. For one thing, the location where this occurred. How much time it took for the call [to police] to take place. My point is… I’m fine with an investigation taking place. What I’m not fine with is the media making this a big enough story that we have to get minute-by-minute coverage.

You let an investigation take place, and then you reach conclusions.

This investigation is still ongoing, and there are some troubling aspects about it that need to be further developed. Why won’t [Smollett] give the [phone] records so we can see who he was calling and hear it simultaneously?

With the facts of the alleged attack now in serious dispute, many liberals who wanted to believe Smollett’s account are now pivoting to suggesting any fabrication is based on real racism in general. Guest host Raymond Arroyo highlighted an essay in GQ magazine in which Joshua Rivera wrote about the situation: “While the veracity isn’t confirmed, its sentiment needs no fact-check.”

Terrell agreed, saying, “It’s clear… the… last two years under the Trump Administration, this country has been divided based on race, gender, sex, sexual orientation – so, it’s not surprising people have done this.”

Citing that the facts are more positive than Terrell would lead people to believe, Horace replied: “If – by division by race, gender and sex – you mean women have earned more, blacks have earned more, Latinos have done better, yes, I guess we are. Because they have done so faster than the rest of the country.”

On the issue of intolerance, Horace also noted how Alec Baldwin has not earned the media spotlight for a recent physical altercation in which the liberal actor allegedly also used homophobic slurs (and this is not the first such allegation against him):

I’m still waiting for the Alec Baldwin trial to take place, when he made homophobic attacks. But we haven’t been getting hour-to-hour or minute-to-minute coverage of that.