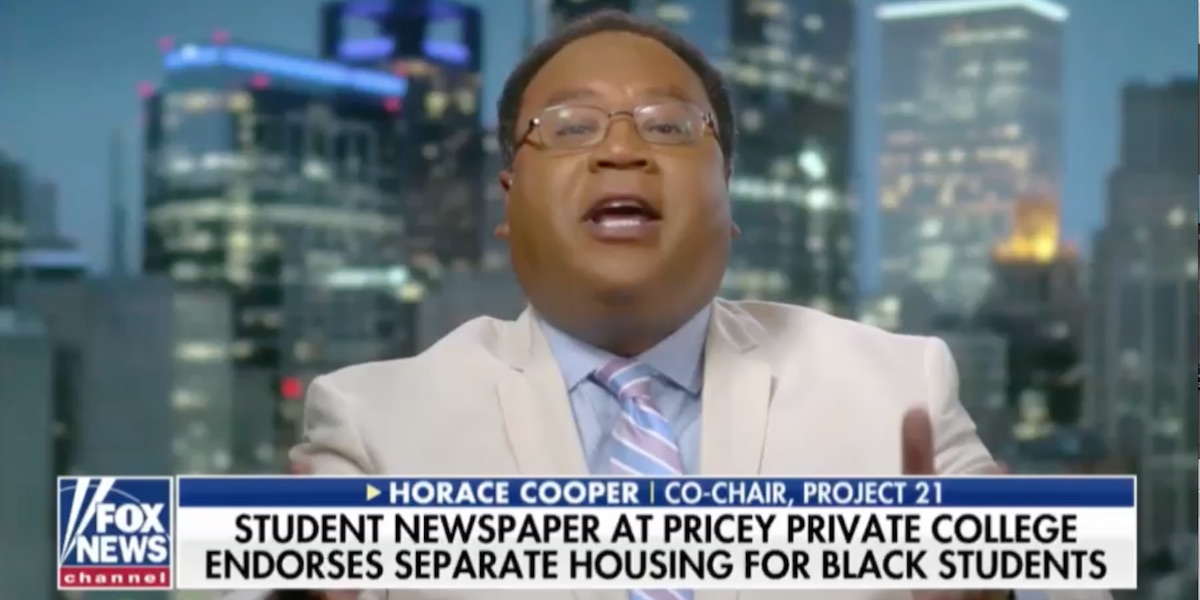 Very bluntly declaring “it’s a scam,” Project 21 Co-Chairman Horace Cooper denounced the idea of paying reparations now for acts of slavery that occurred generations ago. Besides the fact that “[t]here are no living former slaves,” Horace said the current push for payments to black America is due to liberals lacking a real policy agenda.

Horace debated the issue with former Georgia state representative LaDawn Jones on the Fox News Channel’s “The Ingraham Angle.” Jones said legislation introduced by U.S. Representative Sheila Jackson Lee to create a commission charged with considering a national apology as well as reparations for slavery and Jim Crow era discrimination is “a great idea right now.” She also noted there are now “candidates that are really willing to open up and speak about it.”

In his no-nonsense response, Horace said:

This is a scam. This is an absolute ruse.

The Democrats and progressives have no actual agenda to offer black Americans or – for that matter – any working Americans in this country.

FDR famously said… all we have to fear is fear itself. Progressives today – all they have to offer is fear.

There is no scenario where checks are coming out to people. This is just a substitute for having to go forward with a real alternative to the booming, job-creation plan that President Trump is presenting.

Guest host Jason Chaffetz later changed the topic to Williams College, where a proposal has been made for “affinity housing” – essentially segregated housing options that would allegedly create “a more welcoming, supportive and safe community for minoritized students.”

Jones said: “I see nothing wrong, just like with reparations, with exploring the ideas of what works for [the students].” She chided conservatives for not supporting “freedom of speech” when it comes to “discussion about what makes [Williams students] comfortable.”

In response, Horace explained that this, just like with reparations, can be attributed to liberals creating animosity and division to compensate for their lack of substantial issues to promote. He said:

We want to wrap discrimination, bigotry and separation in the rubric of the First Amendment. Brown v. Board of Education ruled [that] separation or segregation is inherently unequal.