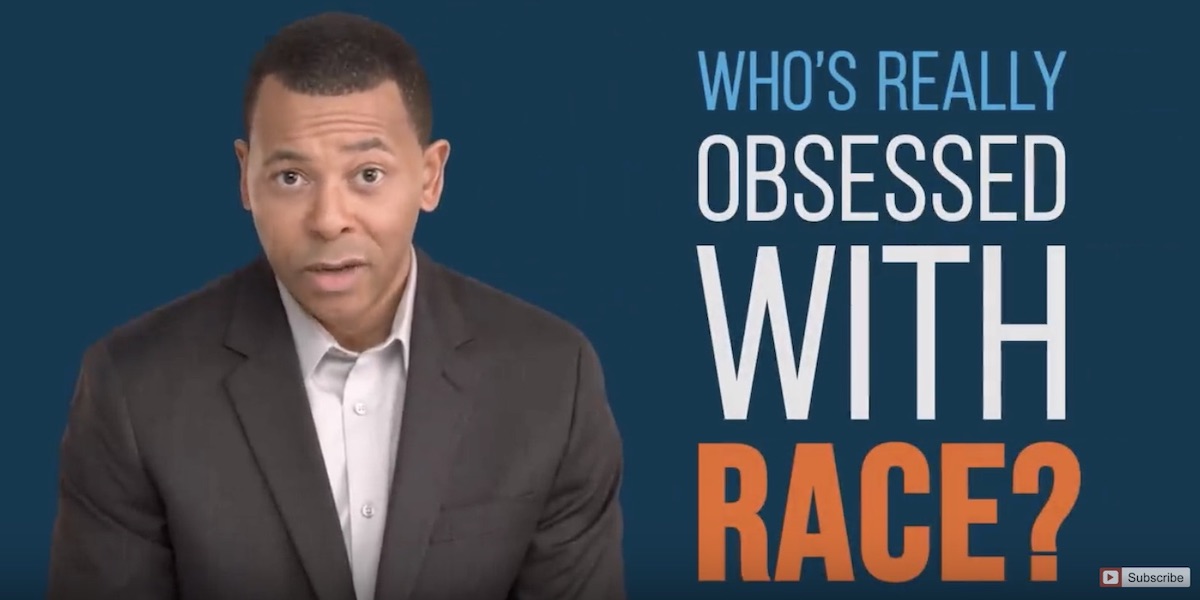 In a new video from Prager University, Project 21 member Derryck Green answers the questions “Who’s really obsessed with race?” and “Whose policies really hurt blacks?” when it comes to conservative and liberals.

Derryck’s video, “Who are the Racists?,” was viewed over a quarter-million times in its first 24 hours online. It closely aligns with Project 21’s “Blueprint for a Better Deal for Black America” in showing the stark differences between how conservatives and liberals seek to help black Americans achieve equality and opportunity.

Noting that conservatives are regularly referred to as racists by politicians, activists, cable news commentators and partisan celebrities, Derryck says that “[t]he left calling the right racist isn’t new.” He adds that all modern right-leaning presidents have been called “racist” by these people “[a]nd, of course, from the left’s perspective, ‘racist’ is essentially Donald Trump’s middle name.”

Because tarring someone as a racist is a “very serious charge,” Derryck uses his PragerU video to show how conservative policies and beliefs don’t warrant the slur. In fact, it can be said that the opposite is actually the case:

So let’s examine some conservative policies to see if they are indeed racist. If they are, then the left has a valid complaint. And if they’re not, then the left is lying.

As his first study, Derryck takes on the issue of affirmative action. He says that preference policies may have helped in the past, but should no longer be necessary in present-day America unless the advocate for such policies still harbors poor preconceptions about minorities. Derryck explains:

One can make the case that this policy had some utility when it was first put in place. But that was a long time ago. The conservative position is that blacks have repeatedly proven that they can compete with anyone without the benefits of lower standards…

But the conservative argument goes further. Study after study shows that, in the case of college admissions, affirmative action hurts more blacks than it helps. By lowering admissions standards for blacks and some other minority students, college set many of these students up for failure. They get placed in schools for which they are not prepared. And high black dropout rates confirm this view…

[L]owering standards for blacks is unnecessary as well as insulting. Yet, for this belief, conservatives are called racists.

In its Blueprint, Project 21 likewise notes that colleges “set blacks up to fail” by accepting black applicants with lower SAT and ACT scores, fewer AP credits and lower GPAs than their peers of other races. Schools also fail to provide individualized support so that these disadvantaged black students can overcome this gap. The resulting problem is evident in the small percentage of black students able to graduate within six years. To increase success and to avoid the reality of black students dropping out and amassing debt they cannot easily pay off, Project 21’s Blueprint recommends incentivizing schools to select and nurture the right applicants by tying eligibility for federal aid programs to a minimum six-year graduation rate for both minority students and the entire student population.

Derryck next tackles the issue of voter protections, and says about the left and voter ID laws:

[T]hey argue it’s really a ruse to prevent blacks and other minorities from voting since many of them just aren’t capable of acquiring an ID. Can you get more condescending than that?…

Whites can do it, but blacks can’t. Tell me again who the racists are!

Noting how election fraud has targeted black communities and thus has overturned the gains of the Civil Rights Movement by depriving blacks of a voice in making policy, Project 21’s Blueprint recommends robust ballot protections that include voter ID, proof of citizenship, cleaning up voter rolls of those who have moved or died or have not voted, not mailing ballots to those who don’t request them and prosecuting individuals or groups targeting black communities for voter fraud activities.

Lastly, Derryck notes that school choice is a conservative issue under constant attack from the left:

Those on the left fight those reforms at every turn. It’s the left that doesn’t trust minority parents to select an appropriate school for their children.

Why aren’t the people who keep black children in failing schools the racists?

To reverse the trend of black students being stuck in failing government-run schools, Project 21’s Blueprint recommends creating a federal needs-based school voucher program and tax credit scholarships that would receive some funding through a reduction in federal support for schools that fail to meet minimum standards. It also recommends a “Low-Income Educational Opportunity Fund” to replace the “Presidential Campaign Fund” on the IRS 1040 form. The Blueprint further recommends that scholarships be accessible to individuals and organizations for use in nursery schools and day care. It also recommends creating a tax credit for parents or other family members who pay a child’s fees and tuition.

This is the second time Project 21’s Derryck Green has been featured in a PragerU video. He similarly addressed race and politics in a 2014 lecture.