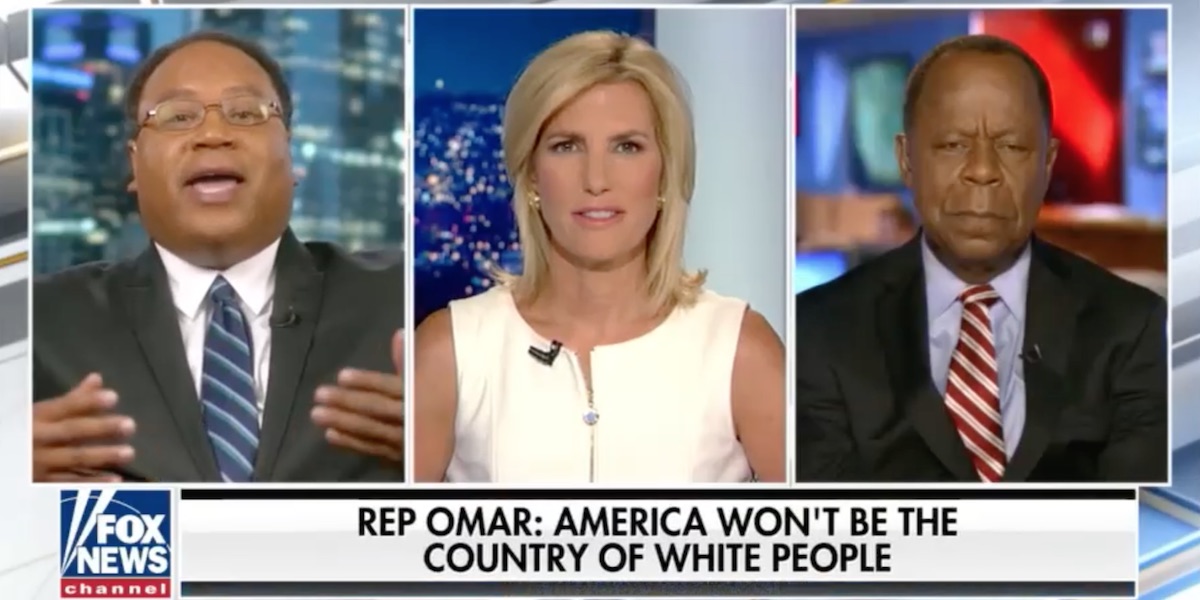 “It’s all the left talks about,” says Project 21 Co-Chairman Horace Cooper about the “race hatred” dominating how radical activists view America, in spite of our nation’s present exceptionalism.

In a debate on the Fox News Channel’s “The Ingraham Angle,” Horace addressed statements made by Representative Ilhan Omar in which she dwelled on the notion of a “xenophobic” America rather than one that he said “stands head and shoulders” in the world. At a Movement for Black Lives rally, Representative Omar — who is under fire for her anti-Semitic remarks — tried to use the event to flip the blame on those condemning her. Speaking of President Donald Trump, she called his criticisms of her a “continuation” of alleged attacks “against women, against people of color, against immigrants, against refugees and certainly against Muslims.”

And while speaking generally about the United States, she was just as hostile. In her vision for changing America, she claimed:

This is race hatred. And it apparently is motivated by hatred of who we are as a country.

There is no perfect country. But, when America stands on the world stage, America stands head and shoulders above. Our actual history more than outweighs with the exceptional accomplishments of the things that make America a remarkable place.

Proving the left’s fixation on the negative, attorney Leo Terrell, who also appeared in the Fox News Channel debate with Horace, insisted that America was “built on slavery” and what Representative Omar said was “her being truthful.” Horace interjected:

It’s a distortion… what about those Americans who lost more of their lives than in any war that we’ve ever been in ending… slavery? What about that consequence?

When Terrell accused Horace of “changing the subject,” Horace replied:

No, I’m not changing the subject. What I’m saying is it’s distorting. It is distorting. America is an amazing [nation].

Suggesting the left is ignoring the “sins of today” to dwell on the past, Ingraham brought up something not even Terrell seemed willing to defend. In Alabama, speaking in favor of unfettered abortion, State Representative John Rogers claimed that some children are “unwanted, unloved.” Presented with this problem, he said abortion provides a choice to “kill ‘em now or kill ‘em later.”

Terrell deemed to call Rogers’s comments a “poor choice of words.” Yet he still would not condemn abortion, calling it “always a debatable” option. Horace instead sought to try to find a way for people of varying political views to work together. He countered:

Human lives are looked upon as some sort of inconvenience. And apparently the end outcome – their death – is an inevitable. We ought to be doing exactly the opposite.

Where are the Democrats joining with Republicans – conservatives and liberals – standing up for innocent human life?”