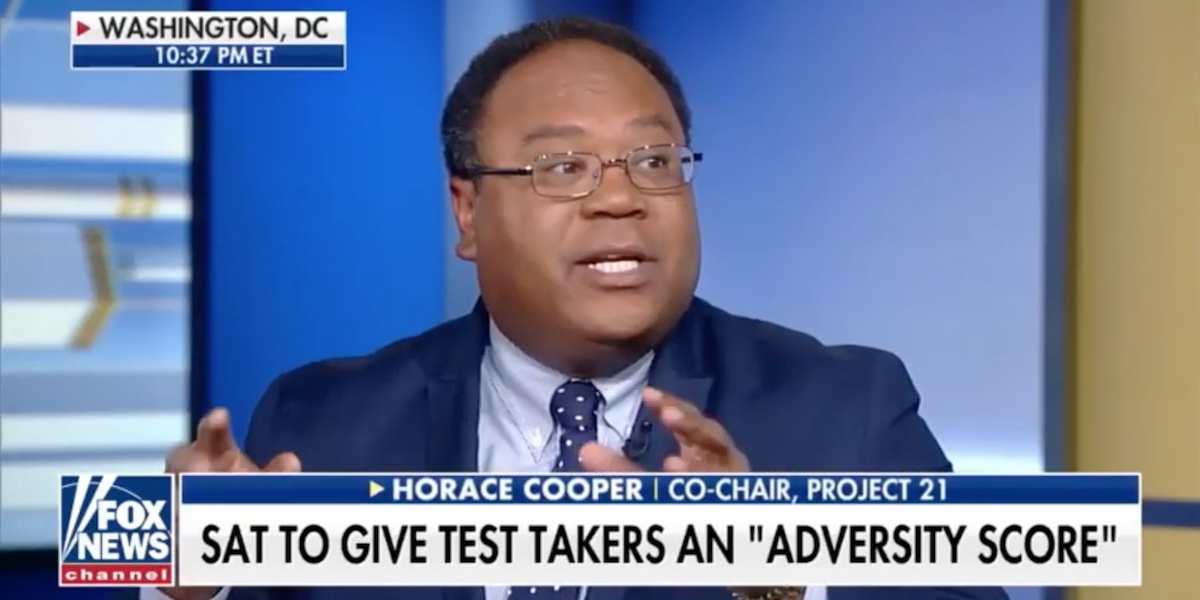 Project 21 Co-Chairman Horace Cooper is thankful for the objective testing standards that guided the college application process when he applied to the University of Texas. Because of his scores, he received a full scholarship.

But that same opportunity, for someone to be awarded due to their merits, may soon be disappearing because of a new score being assessed by The College Board, the company that creates, administers and scores the SAT test for college-bound students. It has developed an additional “adversity score” that can be sent to schools along with a student’s test scores. This score is already being offered to 50 schools, and could be made available to all colleges and universities by 2020.

This adversity score – a 100-point scale in which 50 is considered average – is calculated from family, high school and neighborhood environmental factors in a student’s community – factors including home value, crime rate, single parenthood, median income and free lunch enrollment. Duke University Dean of Undergraduate Admissions Christoph Guttentag said an adversity score would help “understand each applicant’s context a little better” because he thinks the current admissions process is “not a level playing field.”

On the Fox News Channel program “The Ingraham Angle,” Horace agreed with host Laura Ingraham that this could be  a “proxy for race-based admissions.” He said “that’s exactly what this is.”

A lot of these lawsuits are getting to the courts, and the courts are making it harder and harder to use race as a proxy.

You come up with this adversity score, and then you don’t tell the student what his score is. And the schools get to decide which portions of it [to use].

What they’re actually getting to do is throw away:

Those kinds of things are what the SAT is supposed to do.

Now if you don’t want an SAT anymore, that’s fine. But what you shouldn’t be allowed to do is have the SAT company work in tandem with the affirmative action crowd.

That’s just giving more advantage to one group over another group.

Leo Terrell, an attorney who often faces off on the show against Horace in what Ingraham calls her “Dynamic Duo,” talked about his family’s adversity and how he valued opportunities that allegedly took his situation into consideration. He asserted that “you gotta give people opportunity.”

Horace, who brought up the gradual rise in education attainment within his own family, said he did not seek to deny anyone opportunity:

It’s not about closing any doors… It’s about making sure that – in America – you’re not judged by your race in deciding if you get educational opportunities.

Polls show that people are overwhelmingly opposed to using race and ethnicity as a factor in college admissions. A poll conducted by Pew Research earlier this year found 73% completely opposed to it, and 19% who thought it should only be a minor factor.

Michael Nietzel, a retired president of Missouri State University, told Fox News that “one must wonder whether adversity scores are primarily an attempt to protect the SAT’s market or to promote social mobility.” He also was critical of the secrecy behind the creation of the adversity score, adding that “[t]he fact that the College Board does not want students to know their adversity scores reflects their own discomfort with the concept.”

The recent scandal over elite families abusing the admissions process through bribes and false applications should only bring more scrutiny to this new “adversity score” tactic.