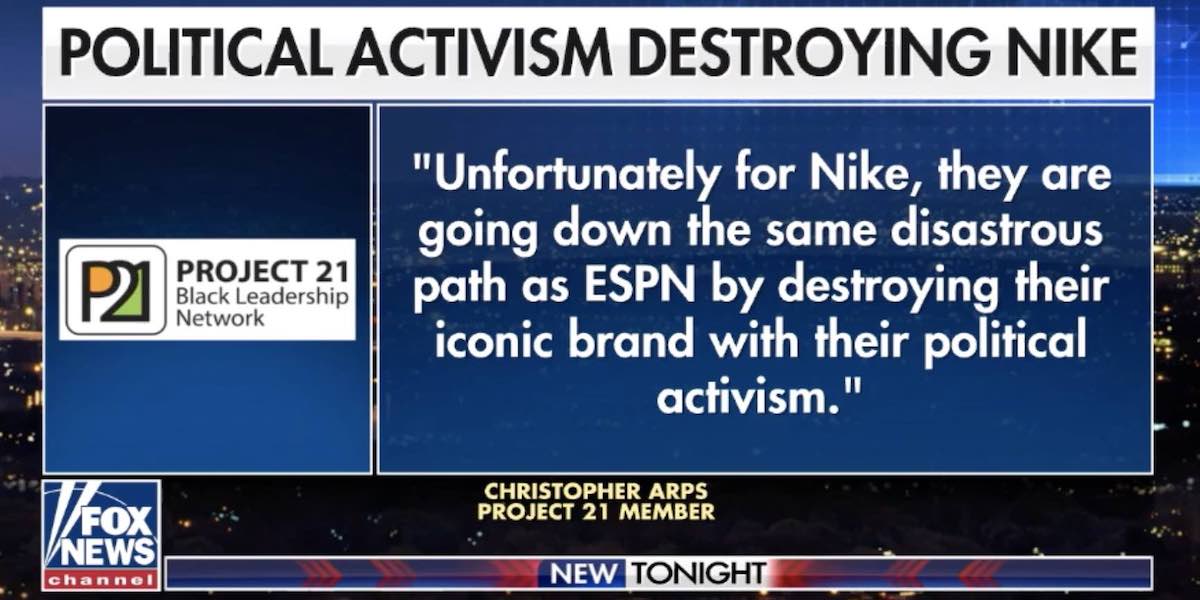 Two times over the past two days, Fox News Channel programs featured Project 21 members in their coverage of Nike’s decision to recall a line of patriotic-themed shoes.

Nike made the stunning reversal after its advertising pitchman, failed football player Colin Kaepernick, called the flag offensive. In a press release, Project 21 member Christopher Arps said: “Unfortunately for Nike, they are going down the same disastrous path as ESPN by destroying their iconic brand with their political activism.”

On two Fox News Channel programs, Project 21 members and their views helped guide the discussion – providing an alternative to the leftist narrative that the “Betsy Ross flag,” the 13-stars-in-a-circle design recognized as America’s first flag that served as the national flag between 1777 and 1795 – is offensive, and that hiding it was a good move for Nike.

In a panel discussion on “The Ingraham Angle,” Project 21 Co-Chairman Horace Cooper told guest host Tammy Bruce that he has no disdain for any American flag and that “you’ll see one flying out on my house right now.”

Speaking on the controversy that Kaepernick created, and the eagerness of the left to validate his opinion while trampling on a flag that guided the American Revolution and hung above both inaugurations of the first black president with no complaints, Horace noted all of the controversy is either a sick gimmick or an ugly revelation of just how much the left hates America. He said:

Either we’re watching a fairly elaborate ritual or publicity stunt, or there’s out-and-out hate being manifested.

There isn’t any way to look at how someone can say they are offended by the idea that as we approach the Fourth of July – the day that this American concept came into being, a concept that has impacted the planet for good.

If you are offended by that, you either are part to hate, or it’s a publicity stunt. I don’t see any other options.

When panelist Anthony Tall tried to parse the discussion and say it is just the Ross flag he is against – claiming he’s proud of the current flag – Horace reminded him that his views were not shared by Kaepernick.

Critics complain that the Ross flag is insensitive to black Americans now because slavery was legal at the time the flag was flown as the national flag. But, undercutting Tall, the current flag flew during a time of segregation and Jim Crow laws. By that logic, Tall should be deferring to Kaepernick – who extends his opposition to the current flag because he believes America is “a country that oppresses black people and people of color.”

On the program “Fox News @Night,” Christopher’s comment about Nike’s poor business decision to drop the shoe was the focus of a panel discussion featuring former congressman Jason Chaffetz and lawyer Robert Patillo.