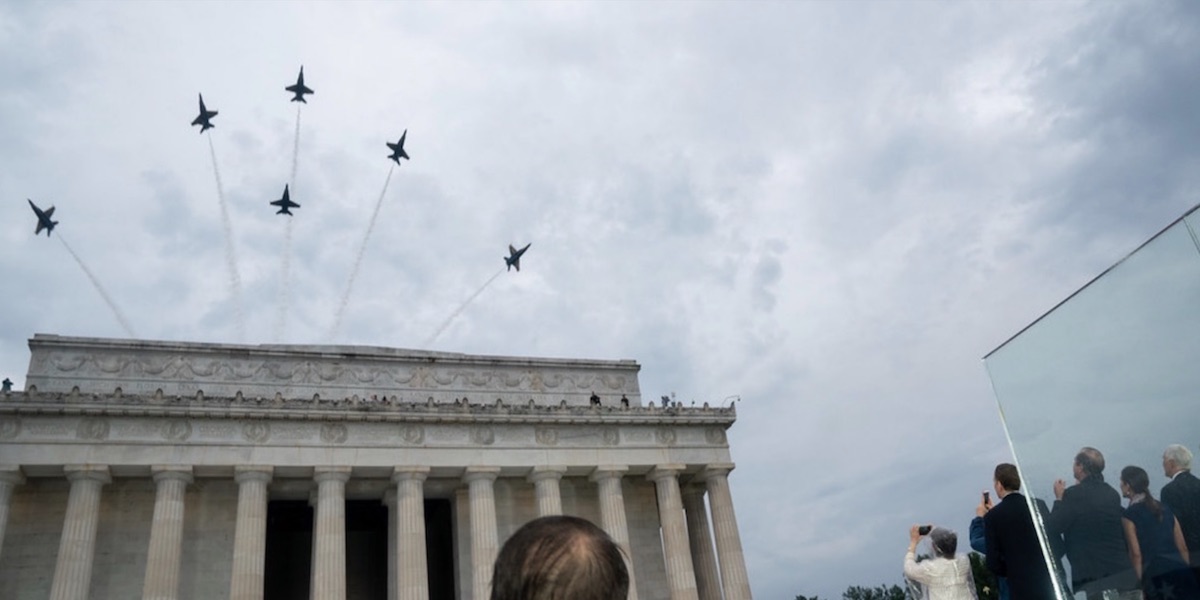 08 Jul 2019 Salute to America Made Fools of Trumpophobes, by Deroy Murdock

The left overpromised. The president under-delivered.

Before Donald J. Trump’s July 4 Salute to America, his foes described this event as, at best, a parade of partisanship, narcissism, racism, and divisiveness. At worst, they billed it as a pageant of despotism or a prelude to martial law.

By 7:32 p.m., when Trump finished speaking at the Lincoln Memorial, he had reduced these hyperventilated warnings into flaccid windsocks. And those who had screamed from the rooftops looked like rejects from Klown Kollege.

Rep. Gerald Connolly, D-Va., said of Trump: “He can’t resist injecting partisan politics into the most nonpartisan sacred American holiday there is: the Fourth of July.”

Look how often Trump used these words in his 56-minute partisan screed:

As former Housing Secretary Julian Castro told CBS, “instead of addressing something like veteran homelessness, [Trump] is spending it on boosting his ego with a parade that’s fundamentally about him…”

“His latest grandiose photo op appears to be a reflection of his own vanity, obsession with crowd sizes, craving for the spotlight,” wrote CNN’s Stephen Collinson. “Trump’s critics fear he’s really plotting a salute to himself.”

In his 4,245-word speech, see how frequently Trump uttered these words:

Me: One (Trump asked several dignitaries “to join me onstage”)

“Trump is not the first U.S. president to give a major speech on the Fourth of July,” Fox News contributor Marc Thiessen recalled in the Washington Post. Republicans Gerald Ford, Ronald Reagan (on an aircraft carrier), and George W. Bush did so. So did Democrats Woodrow Wilson, Harry S. Truman (on the National Mall), and John F. Kennedy.

Maybe it was “all about them,” too.

Anti-Trump protester Noel Eldridge told USA Today, “I know the particular kind of bully and racist he is.”

“Devotion to our founding ideals led American patriots to abolish the evil of slavery, secure civil rights, and expand the blessings of liberty to all Americans,” Trump said. “In 1963, Reverend Martin Luther King, Jr., stood here on these very steps and called on our nation to live out the ‘true meaning of its creed,’ and ‘let freedom ring’ for every citizen all across our land.”

David Duke must have loved to hear Trump say, “America’s fearless resolve has inspired heroes who defined our national character” including “the great Frederick Douglass, Harriet Tubman,” and “Jackie Robinson.”

Trump explained that Clarence Henderson, then 18, joined a pro-integration sit-in at a North Carolina lunch counter. The crowd cheered as Henderson stood, and Trump said: “Clarence, thank you for making this country a much better place for all Americans.”

“Donald Trump, I believe, is incapable of celebrating what makes America great, because I don’t think he gets it,” former Vice President Joe Biden said last week.

“Together, we are part of one of the greatest stories ever told: the story of America,” Trump said, in words that moistened listeners’ eyes. “It is the epic tale of a great nation whose people have risked everything for what they know is right and what they know is true…And it is the saga of thirteen separate colonies that united to form the most just and virtuous republic ever conceived.”

“Our quest for greatness unleashed a culture of discovery that led Thomas Edison to imagine his lightbulb, Alexander Graham Bell to create the telephone, the Wright Brothers to look to the sky and see the next great frontier,” Trump continued. “For Americans, nothing is impossible.”

“Our nation’s creativity and genius lit up the lights of Broadway and the soundstages of Hollywood,” Trump added. “It filled the concert halls and airwaves around the world with the sound of jazz, opera, country, rock and roll, and rhythm and blues. It gave birth to the musical, the motion picture, the Western, the World Series, the Super Bowl, the skyscraper, the suspension bridge, the assembly line, and the mighty American automobile.”

“There are tanks in the nation’s capital and concentration camps at its border,” columnist Charles Blow bloviated via Twitter. “The drift to [sic] toward the unimaginable is unmistakable.”

Rather than a “resemblance to days before Tiananmen Square,” as Harvard Law professor Laurence Tribe trembled, several motionless tanks paid silent tribute to the GIs who man them.

Rather than lead a coup d’état, presumably against himself, Trump lauded each military service and its personnel, with powerful words, performances of their service songs, and flyovers of their aircraft.

“America’s fearless resolve,” Trump said, “has willed our warriors up mountains and across minefields. It has liberated continents, split the atom, and brought tyrants and empires to their knees.”

Here’s how Trump described what might be America’s most underappreciated fighting force: “When the red racing stripes of a Coast Guard vessel break the horizon, when their chopper blades pierce the sky, those in distress know that the help is on their way, and our enemies know their time has come.”

As he constantly does, and the Trump-hating media rarely report, the president tried to coalesce this divided country.

“Now we must go forward as a nation with that same unity of purpose,” Trump said. “As long as we stay true to our cause, as long as we remember our great history, as long as we never ever stop fighting for a better future, then there will be nothing that America cannot do.”

The president of the United States pledged: “The spirit of American independence will never fade, never fail, but will reign forever and ever and ever.”

Deroy Murdock, a member of the Project 21 black leadership network, is a Manhattan-based Fox News Contributor, a contributing editor with National Review Online, and a senior fellow with the London Center for Policy Research. This first appeared at Fox News.