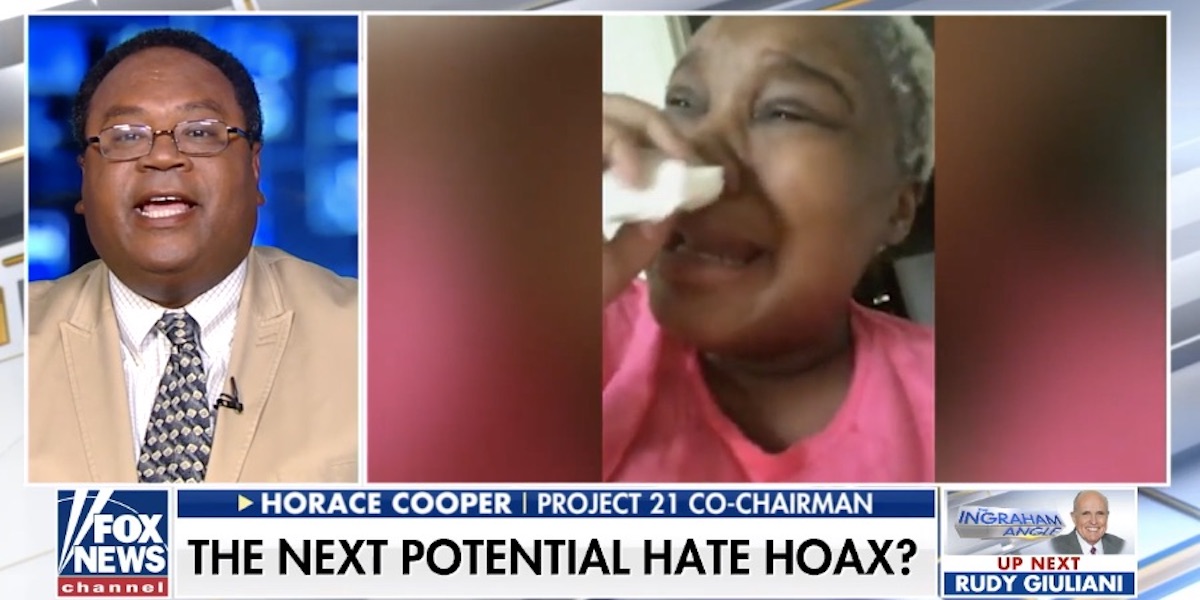 We’ve seen it before with Jussie Smollett and Nick Sandmann. The left creates – and the media seeks to perpetuate – racial animosity through breathless reports of alleged bigotry that, in the former case, is used to lecture the nation about the evils of “just another… day in America.”

And then the claims of racism turn out to be false and blown out of proportion.

The latest hoax involved Georgia Representative Erica Thomas. She originally fought back tears as she claimed to have been told to “go back where you came from” by a white man in a grocery store. After the story received national attention, and was attributed to an environment created by the Trump Administration, Thomas walked back the “go back” accusation when the accused man came forward to challenge her claims. Not only did he profess his innocence, he also revealed he was actually a Cuban and an anti-Trump liberal.

On the Fox News Channel program “The Ingraham Angle,” host Laura Ingraham devoted her opening segment to how the left has embraced race and accusations of bigotry as means of establishing and securing power. She called these hate hoaxes “political extortion,” accusing the left and the media of mob tactics that boil down to “support us or we’ll break your reputation.”

In a panel discussion with frequent sparring partner Leo Terrell, Project 21 Co-Chairman Horace Cooper noted an inherent flaw in the left’s strategy that has exposed so many of these hoaxes: America is nowhere near the hotbed of hate that leftists create for their narrative. This makes it difficult for them to keep their hoaxes going.

The problem here is there is so little bigotry in the United States of America [that] people have to fake it. In the case of Chicago [and Jussie Smollett], they have to bring people from outside of the country to do the racism that Americans just aren’t willing to.

Once again, what we see is hoax after hoax after hoax. And, in fact, it’s so rare that the media gives it extra oxygen to try to make it out to be something it’s not.

To try to bring some credibility to the leftist narrative, Terrell brought up a previous Fox News Channel program in which host Chris Wallace asked White House advisor Stephen Miller about accusations of illegal immigrant detention centers being “concentration camps.” Horace rebutted the accusations Leo made and further acknowledged that Miller brought up how offensive such an inference was to people of Jewish descent. Horace inquired:

I wanna know why that’s OK and that’s not considered bigotry.

Horace’s debates with Leo are always a hit with Ingraham, and this episode immediately generated tweets to Project 21 saying that Horace is one of her best guests because he speaks simple truths and wins with his positive demeanor.