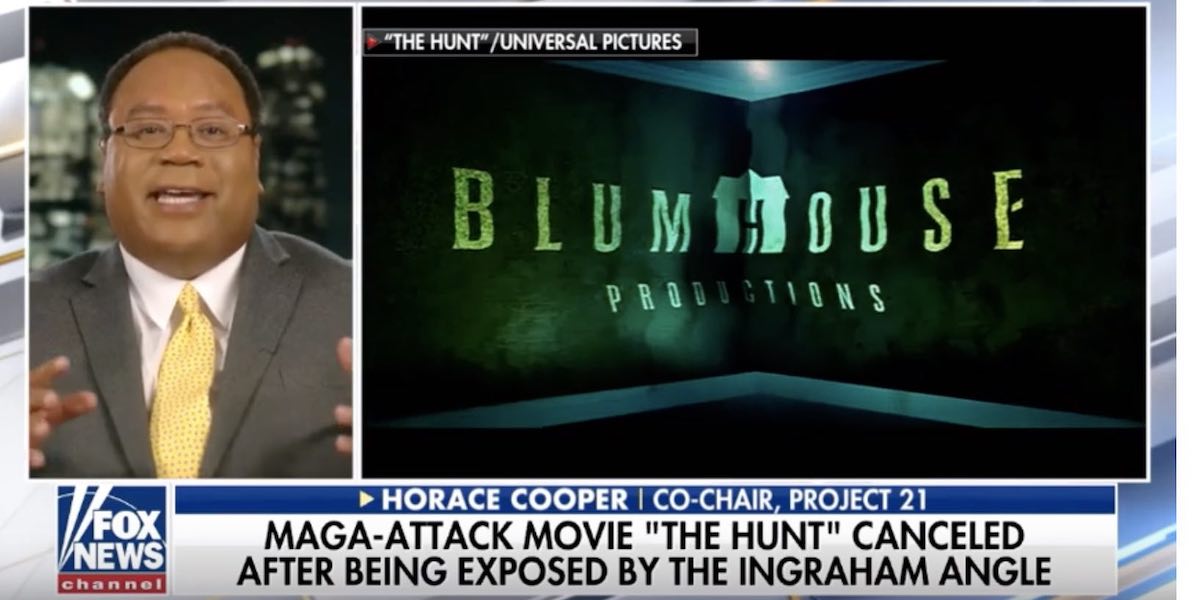 Along with the liberal creations of a right to marry and a right to an abortion, liberal attorney Leo Terrell proclaimed on the Fox News Channel that “Hollywood has the right to make a movie.”

While there is a right to free speech in America, and no true conservative wants that right to be infringed, there are also responsibilities that Hollywood must consider. In this case, Terrell was defending the right for NBCUniversal to distribute the movie “The Hunt.” The movie, which was recently pulled from the company’s movie schedule, had been marketed as a horror story about rich, elite Americans kidnapping and hunting their “deplorable” counterparts.

In the debate about these rights on “The Ingraham Angle,” Project 21 Co-Chairman Horace Cooper responded:

Horace said the problem is that Hollywood is catering to an extremely small segment of the population with these movies:

This is the problem that Hollywood has. This fever dream on the part of a couple of writers and directors and producers to say let’s just talk to a small segment of the American society and have this idea – a murder fetish.

And it’s a sign that Hollywood really is kinda out of ideas. It’s really kind of pitiful when you think about it, when there are really good ideas – credible ideas – that could have been put forward.

And “The Hunt” is not an aberration of Hollywood’s get-work/go-broke filmmaking proclivity. This film comes from the makers of “Get Out” and “The Purge,” which are steeped in conspiracy about race and class divisions. Then there is also:

Terrell suggested “The Hunt” was a victim of timing – scheduled to come out so soon after the shootings in El Paso and Dayton. He cited other movies with similar problems that were later released. But Horace said all this doesn’t mean that Hollywood can’t make successful suspense and action movies during trying times. He mentioned “Deliverance,” a film that made over 20 times its budget in December of 1972 despite a month of war in Vietnam, terrorism in Ireland and tens of thousands dead in earthquakes in Nicaragua:

You remember “Deliverance”? It was a movie in which we took people from a particular geographical location… mixed then in and had a really, really intense, amazing movie. This isn’t anything like that.

And it’s a good thing that they decided to pull it, because at least now – the money they’ve spent – they don’t need to waste any more with needing to market it or anything like that.

Terrell also suggested this was a “free enterprise” issue, suggesting that Americans “let Hollywood decide” what to make and overcome of the “censorship” of people such as Horace and President Donald Trump. The President reacted to “The Hunt” by calling Hollywood “really terrible” and doing a “disservice” to the nation. Horace pointed out: There is a “free enterprise” angle Terrell didn’t consider – fiduciary responsibility to shareholders. “The Hunt” was being distributed by NBCUniversal, a division of the publicly-traded Comcast. Because of the bad decision to get behind this movie, Comcast shareholders’ investment has been harmed.

Now any potential for making a profit from this film is gone. At the next Comcast shareholder meeting, shareholders have a legitimate reason to question the board and the corporate leadership about “The Hunt.” They should ask why a company that claims to be “uniquely positioned to education, entertain and empower” likely lost tens of millions in shareholder investment. Was this a proper use, as they claim, of “[l]everaging our far-reaching storytelling platforms to educate our audiences and ignite conversations about critical issues that shape the world?”