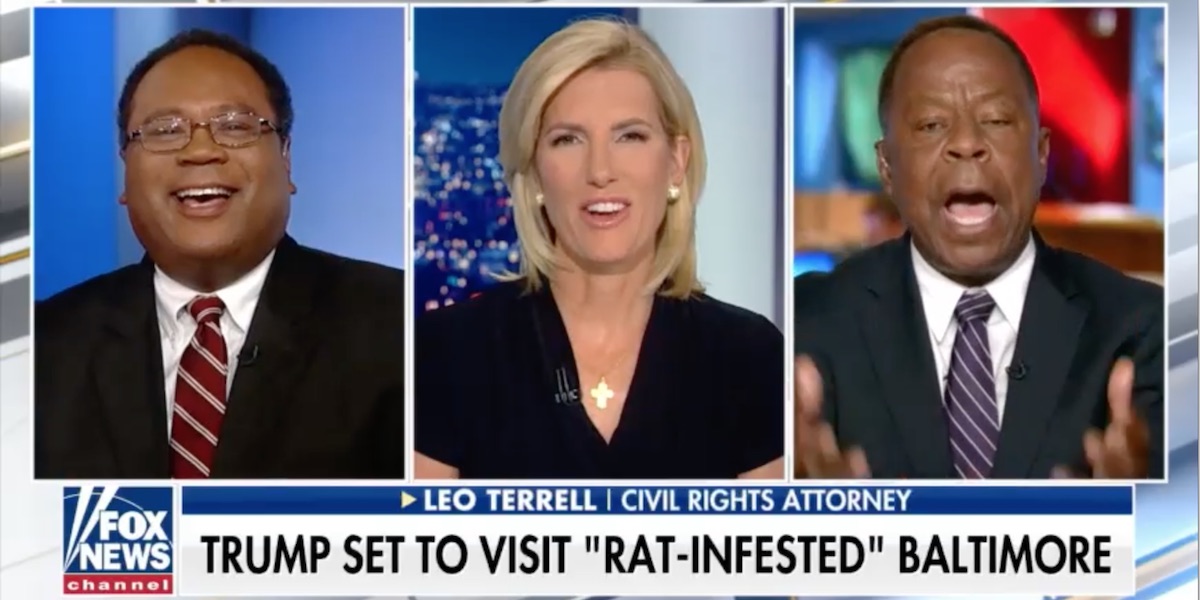 During his first visit to Baltimore since his July tweets about crime and rat problems there, President Donald Trump encouraged conservative members of Congress on a legislative retreat to “fight for the future of cities like Baltimore that have been destroyed by decades of failed and corrupt rule.”

The day before the president’s visit, Project 21 Co-Chairman Horace Cooper made a similar case  on the Fox News Channel program “The Ingraham Angle.” He said:

Baltimore needs complete overhauling. The mismanagement that has occurred there, the people that are hurt… Every step forward – we should acknowledge as positive. What we shouldn’t say is there hasn’t been any steps forward. There have been some, but there are a lot more to take place.

While fellow panelist Leo Terrell seemed willing to put all of Baltimore’s problems on President Trump’s shoulders, host Laura Ingraham said it is one of many “badly run cities by liberals who won’t learn lessons.”

Ingraham remained skeptical of Horace’s optimism. So he explained:

It’s not humming – it’s better… It is improved.

I spent the Fourth of July in Baltimore because it’s something that I will do now that I wouldn’t have done three or four years ago.

Pointing out that Baltimore is just beginning to mend, Horace added:

What I am concerned about is the emphasis over appearance contrasted with substance….

Baltimore is better today that it was before [Trump] became president. Now there’s a lot more that needs to be done because that city is still being mismanaged. But the free market, the low regulation, small government solutions…

In citing a specific improvement that has helped black residents of Charm City, Horace noted about President Trump:

I’ll tell you what he’s done. He has created a circumstance where black Americans – including in Baltimore – you can get a job.

Project 21 has also tried to do its part.

After the president criticized Baltimore, Project 21 mailed copies of its “Blueprint for a Better Deal for Black America” – its 57 recommendations “to remove barriers blocking blacks from reaching their full potential” – to Baltimore Mayor Bernard C. “Jack” Young, the Baltimore City Council and Representative Elijah Cummings. This was followed up by emails, to which only one councilman responded just to say our message had been received. Automated replies promising responses within hours went unfulfilled.

Project 21 is following up again with city leaders with correspondence that includes downloadable versions of the Blueprint. The leaders’ continued silence will confirm the assertion made by Ingraham that “liberals… won’t learn lessons.”