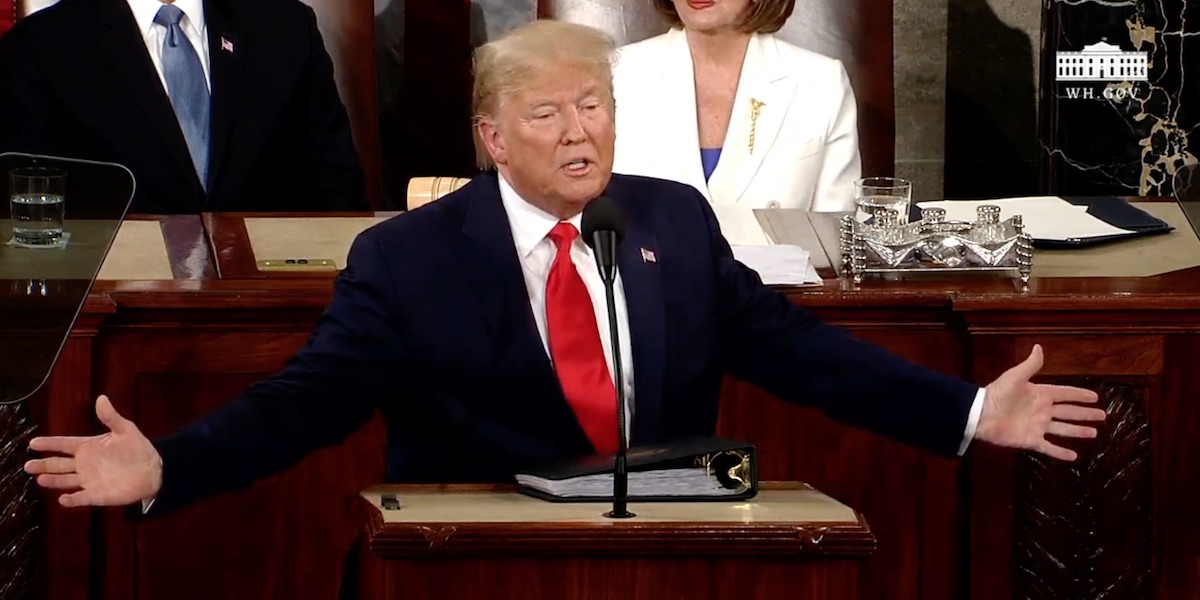 Project 21 Condemns “Hatred and Shallowness” on Display by Presidential Critics

Washington, D.C. – Responding to the upbeat message in President Donald Trump’s State of the Union address, members of the Project 21 black leadership network commend the progress that black Americans have made in recent years due to lower taxes, less regulation and policies that “put America first.”

“Tonight, the President strode into the last State of the Union Address of his first term with polls showing race relations at an all-time high, unemployment across all metrics at all-time lows, and a booming economy. He recently signed a new trade agreement with China and closed the USMCA trade agreement,cementing his legacy as a dealmaker,” said Project 21 Co-Chairman Stacy Washington. “For a non-politician to accomplish these things is simply unheard of.”

“President Trump’s policies have put America back on the road to greatness, and his policies are benefiting all of its citizens. He proudly celebrated ‘the great American comeback’ and proclaimed that ‘we are never ever going back,’” added Project 21 member Emery McClendon. “In short, America is now working for every American – from criminal justice reform to strong 401(k)s to job creation.”

In his speech to Congress, President Trump described an America experiencing a “blue collar boom” that has resulted from record job creation, opportunity zones in poor communities and higher take-home pay. Other aspects of the nation’s economic boom were attributed to increased energy independence, lower taxes and higher levels of consumer confidence.

“The most admirable point made by President Trump during his address was that – unlike his predecessors – his administration has delivered on the promises to voters,” remarked Project 21 member Donna Jackson. “With this blue collar boom, we have record-low unemployment, soaring wages, falling crime rates and new opportunity zone legislation for low-income minority areas. With permanent funding for historically black colleges and universities and the promise of the passage of the new opportunity scholarship program, the American dream is alive and working again.”

“Numbers do not lie. The state of the union for black America has grown exponentially brighter since 2017. Our citizens are going from welfare rolls to the payrolls of jobs that are springing up in a revitalized economy,” noted Project 21 member Martin Baker. “Even a recent poll by Gallup shows a double-digit increase in views about the state of race relations compared to three years ago. Millions of our fellow citizens are back to work. Funding of historically black colleges and universities, criminal justice reform through the First Step Act and a rollback of economy-killing regulation has contributed to the American Dream being realized by our brothers and sisters.”

For over a quarter-century, members of the National Center for Public Policy Research’s Project 21 black leadership network have been a leading voice in highlighting the diversity of political opinion in the black community, and have been frequently featured in the media discussing State of the Union addresses.

“President Trump gave an outstanding State of the Union address,” said Project 21 member Marie Fischer. “He lauded how far America has come in the past three years. He spoke about how we have rejected the downsizing of America and are moving at an unimaginable pace and never going back. He spoke about how we now have the best economy in over half a century, a rebuilt military, more secure borders and flourishing American families. I personally loved his Kennedyesque goal to wipe out the AIDS epidemic by the end of this decade, and appreciated his requests for more medical research funding and for a federal ban of late-term abortion.” “As in previous State of the Union addresses, black leftists in Congress didn’t stand and applaud the historically low overall unemployment rate for blacks or the historically low black poverty rate,” said Project 21 member Derryck Green. “Leftist women didn’t stand and celebrate the historical job gains by women. Leftists in total didn’t celebrate the job gains for veterans. They booed the President when he highlighted the number of people lifted off of welfare. They sat silently when he stressed the nation’s growing list of economic gains. They sat still when Janiyah Davis was awarded a chance to escape a failing government school in favor of a higher quality education. How can one watch this and not come to the conclusion that leftists want more Americans unemployed, on welfare, in poverty and undereducated?”

“It speaks volumes about the President’s congressional detractors when their hatred and shallowness won’t allow them to stand and applaud economic news that strengthens America and benefits their constituents,” added Project 21 member Christopher Arps.

Project 21’s “Blueprint for a Better Deal for Black America,” a 57-point collection of innovative policy recommendations over 10 key areas for reform, covers issues from educational reform to deregulation to immigration. After meeting with White House and congressional staff about the Blueprint, Project 21 members have seen the Trump Adminstration implement recommendations such as more realistic fuel efficiency mandates and work requirements for eligibility in the Supplemental Nutrition Assistance Program (SNAP, or “food stamps”).