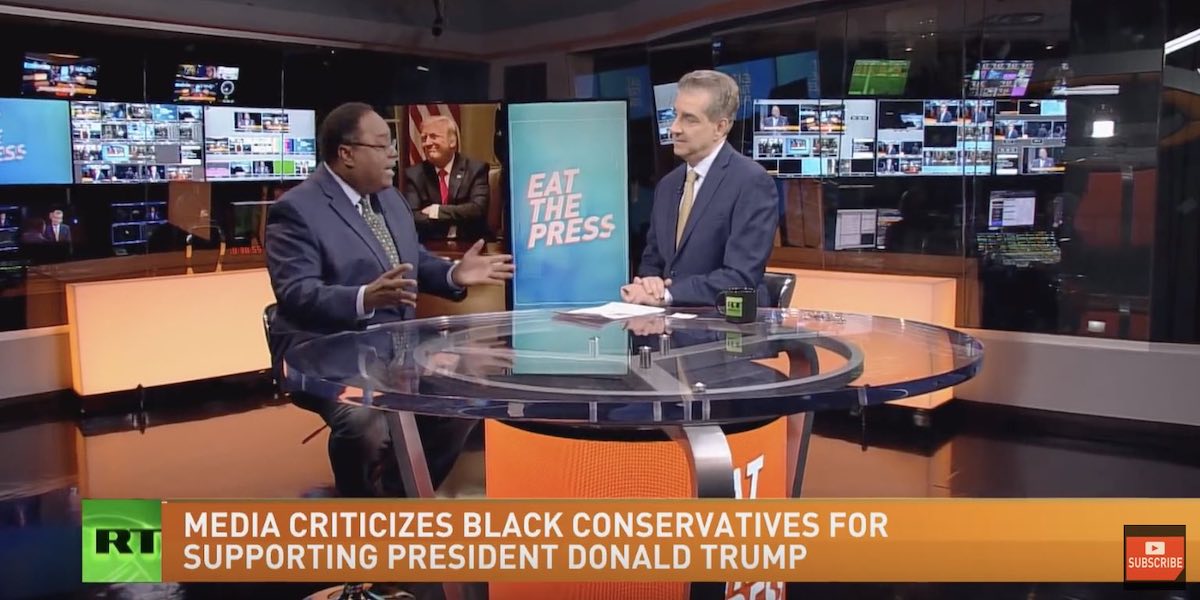 Roland Martin once defended blacks who refused to toe the liberal line, saying that they should not be called “Uncle Toms.” It seems that he no longer feels so strongly about such criticism. After all, he’s upping the ante when it comes to his own racial antagonism.

The ascot-loving Martin, now relegated to podcasting and occasional cable commentary after controversially losing television gigs at both CNN and TV One over the last decade, took to Twitter to call Project 21 Co-Chairman Horace Cooper a “joker” while defending his own radical assertion on MSNBC that “white conservative evangelicals are Christian frauds.”

I don’t give a damn about that joker Horace Cooper, @SteveMTalk Malzberg. He knows full well I’m right. White conservative evangelicals have been silent regarding all of the immoral stuff @realDonaldTrump has done. They are frauds. https://t.co/zfbmsGiWxj

Martin was responding to Horace’s appearance on the RT Network’s “Eat the Press” program, where Horace called Martin out for practicing “faith-based bigotry” on MSNBC. Noting the hypocrisy in Martin’s selective criticism, Horace asked:

Why is it OK for Jesse Jackson and Al Sharpton to use their platform to promote a left-wing social agenda – but for people who are everyday Christians saying, “I’m going to let the Bible inform me,” somehow that makes them bigots and outside of the mainstream?

In his tweet, Martin doubled-down on his “fraud” charge, adding that he didn’t “give a damn” about Horace. Yet he felt compelled to tweet.

Since Martin obviously knew about Horace’s RT segment, it’s worth noting he apparently chose to be silent about liberal black commentator Keith Boykin’s use of the “Uncle Tom” slur during a recent CNN discussion about conservative blacks who support President Donald Trump.

In his criticism of blacks – including Horace – who attended a Black History Month reception at the White House, Boykin rudely and rhetorically asked: “Just what kind of Uncle Toms were sitting in that room in the first place?” He went on to call these conservative blacks “ridiculous,” “an outrage,” “shocking,” “appalling” and “disgusting.”

Boykin was not rebuked by the CNN host. Nor was he rebuked by Martin when Martin had the opportunity and the street cred to do so. But Horace calling out Martin for a bigoted comment about white Christians did provoke Martin’s ire.

Horace, on the other hand, called out Boykin’s “clear bigotry.” In the RT interview, he told host Steve Malzberg:

That’s exactly what Martin Luther King said. You judge people by the content of their character, not by the color of their skin. Certain skin color isn’t supposed to be expected to think a certain way. And if you are a member of the media, you ought to be embracing this idea of bringing us together instead of this lowest common denominator bigotry.

In particular, Boykin’s panel discussed a comment made at the White House reception by former NFL player Jack Brewer, that Brewer felt President Donald Trump was the “first black president.”   Horace said it was “sad” CNN even allowed Boykin’s remarks to make it to broadcast. And, Horace said, there is justification – first employed by liberals – for the comment, even though Barack Obama was the previous occupant of the White House:

This is truly disappointing that CNN has fallen to this point.

No response from Martin about this. Nor did he appear interested in responding to another CNN segment in which black liberal commentator Angela Rye said about the reception, “who the hell are these people?” and “shame on you” regarding black Americans who support the President. But Horace noted more hypocrisy:

I heard none of this talk when black people, along with the rest of America, suffered. But black Americans suffered disproportionately under eight years of Barack Obama. Black Americans lost their houses at a higher rate. Black Americans had the highest unemployment since the Great Depression. I didn’t hear any of that talk.

Here’s the truth. If you [promote] a policy, and you make it better for people, you improve their lives, you make their family life better, that’s a good thing, and you deserve the accolade “first black president.”