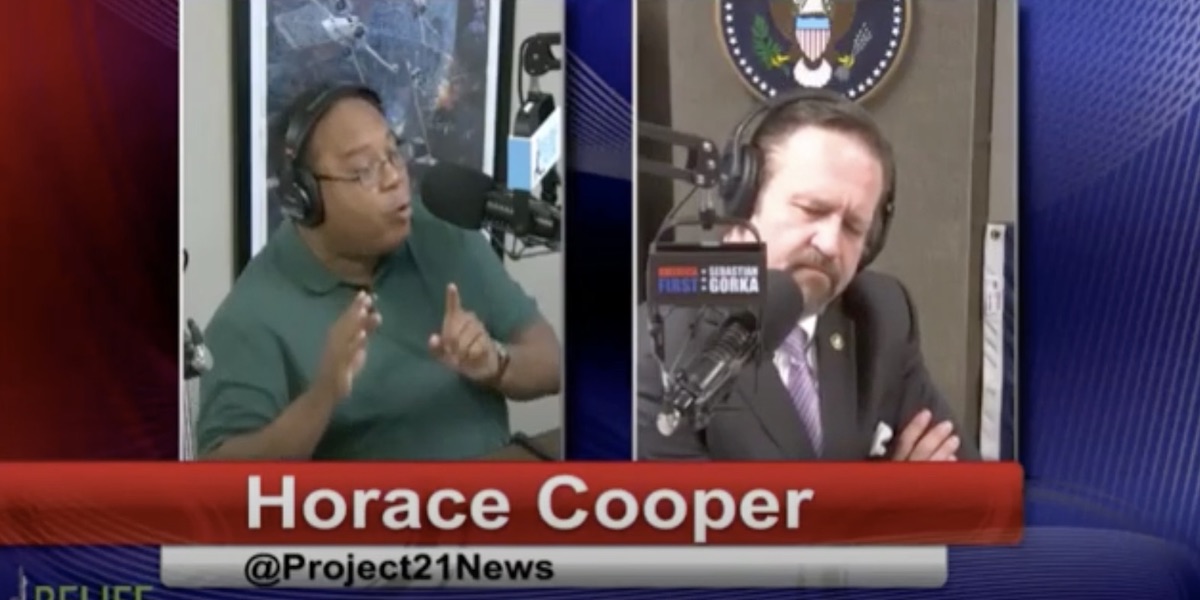 Just like it’s hard to find someone willing to defend fired Minneapolis police officer Derek Chauvin, few  would oppose the right to protest the death of George Floyd while he was in Chauvin’s custody. But the radical ideas and behavior of too many of the protestors diverge from the First Amendment’s protection of peaceable assembly.

Horace said that the “no justice, no peace” mentality is actually a demand for summary justice – mob justice. “It’s unconstitutional. It’s ahistorical,” Horace noted. “It throws out our system of government, our system of justice.”

In his introduction, Gorka said he is always “so excited” to have Horace on as a guest. And, at the end of the interview, he promised listeners that Horace would be invited back soon to do an entire commercial-free hour on the show.

To begin the discussion, they addressed how CNN host Chris Cuomo had asserted that protests don’t have to be “polite and peaceful.” He added that the “[p]olice are the ones required to be peaceful, to deescalate, to remain calm.”

Horace explained that a line is crossed when protests are conducted for the purpose of obtaining a desired outcome. This is a tactic that has historical examples that are not at all positive for civil rights and civil liberties:

What I’ve been witnessing, and what I’m hearing, sounds like hate. It’s hate rhetoric, and it is familiar. All you gotta do is look in your history books and you’ll see that – throughout segregation – you saw hate rhetoric.

Crowds gathered. They made demands. And they sought mob justice. They tried to influence cases, prosecutors. They intimidated elected leaders. And the result of it was a reign of terror on many, many black Americans.

We should never let a decision as to who will be charged and who will not be charged be on the basis of riots outside. I don’t mean looting – I mean literally even marching and making demands.

When Gorka played devil’s advocate and asked if protests weren’t the tactic behind the success of Dr. Martin Luther King, Jr., during the height of the Civil Rights Movement, Horace remarked:

This is not like the Reverend Martin Luther King.

Martin Luther King eschewed all forms of violence, and he promoted principles rather than coming in and making demands about specific cases. In this circumstance, what we are seeing is what led to 4,000 lynchings that happened in America from Reconstruction all the away to the 1950s.

People came out, they “demanded justice” – and the justice they demanded ultimately, frequently resulted in an injustice.

To make his point, Horace said that minorities – and all defendants, for that matter – benefit from the constitutional protection of being considered innocent until proven guilty in court.

But, he noted, “[t]hey are throwing that out when they say that ‘we don’t want the prosecutor in Minneapolis.’” By dictating how the wheels of justice grind, it’s a slippery slope toward the point where unpopular defendants like the police officers facing justice in the Floyd case could be shot or lynched without due process because the mob demands “justice.”

Upon hearing this legal insight, Gorka declared to his audience: “This is the most important interview we’ve done since George Floyd died.”

But what about George Floyd? What about justice for him? A caller asked when Floyd would get his due process. While a farcical question since Floyd is dead, Horace nonetheless used it to lay out procedures related to police-involved shootings and how liberals, lawyers and the media seem to be taking advantage the public’s unfamiliarity with them to advance their agenda:

We know a crime’s been committed, and it’s being investigated… And a man has ultimately been charged.

I understand that the caller might not be aware of that, but Benjamin Crump – the family lawyer – he knows this. A lot of the media’s legal commentators know this. When they pretend that actually Minneapolis, one of the bluest places in America, hasn’t rapidly reached out to induct the officer or the other officers, they’re doing us an injustice.