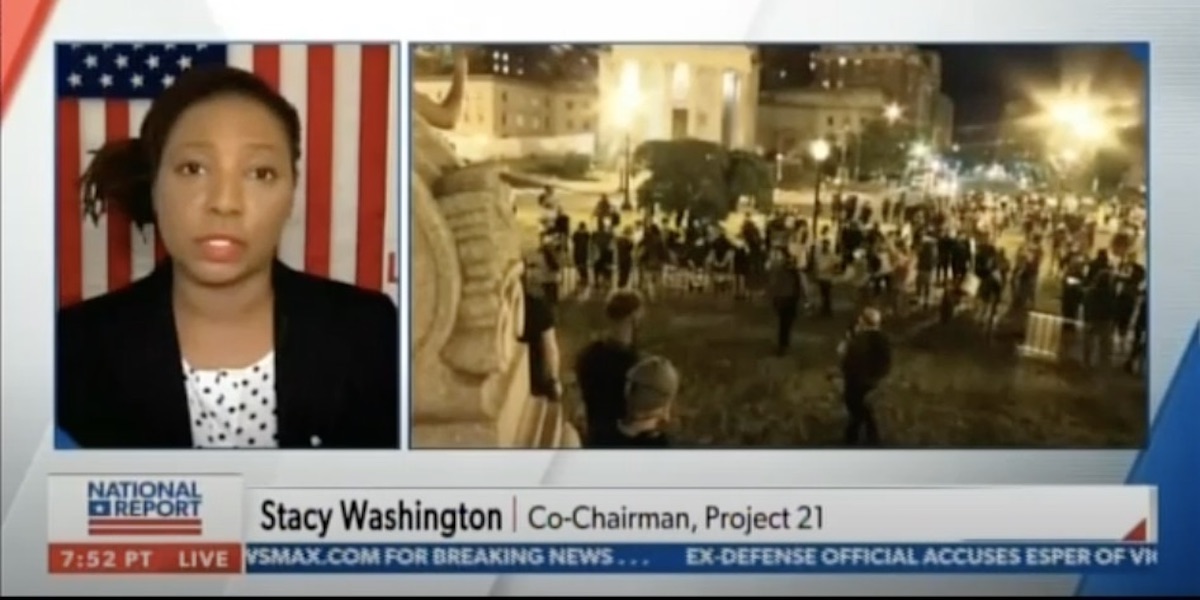 In an interview on Newsmax TV, Project 21 Co-Chairman Stacy Washington discussed the apparent involvement of Antifa in radicalizing originally peaceful protests over the death of George Floyd in Minneapolis.

Rioting and looting has paralyzed both large and small American cities, and Stacy blamed the left for the carnage that has led to more deaths and economic devastation. Citing research she has done for freelance writing projects, she said the left “use[s] Antifa as a sort of mob-action arm.” Describing typical Antifa tactics, she said: “It’s busting heads. It’s beating up grannies. It’s attacking police officers.”

Stacy endorsed President Donald Trump’s announcement that Antifa will be designated as a domestic terror group. In making the case, she added:

The proof is ongoing. And the president’s actions, by calling them a terrorist organization, is entirely appropriate. Peaceful protesters have been hijacked. And I’ve seen video… of Antifa activists… tagging buildings in inner-city neighborhoods with the words “BLM” and expletives.

And a black woman walks up to them and with her camera livestreaming says: “What are you doing? You’re doing this on behalf of Black Lives Matter – we’re a peaceful group.”

Asked about accounts of bricks showing up in riot areas, and if these deliveries are part of coordinated activities, Stacy remarked:

The logic tells us that the simple answer is usually the correct one.

So, in areas where there are no construction areas going on – so no signs of other construction – you see pallets of bricks. Sometimes there’s plastic containers of bricks.

They’re marked as delivered to public works. But the people who are delivering them – down south they’re being delivered by Acme Brick…

So this is just logic saying if protests erupt, and within 48 hours of protests erupting, all of a sudden pallets of bricks are showing up. And Antifa members dressed all in black are hurling the bricks through glass structures and damaging public property and private businesses. Then we know this is part of a coordinated effort.

Stacy hopes that a robust investigation will bring those responsible to justice:

And my hope is that, as the FBI and our other intelligence agencies are moving into cities across the country to investigate these acts, that the people who are involved will be brought to justice and charged with what they’re doing – which is terrorism and mob activity.