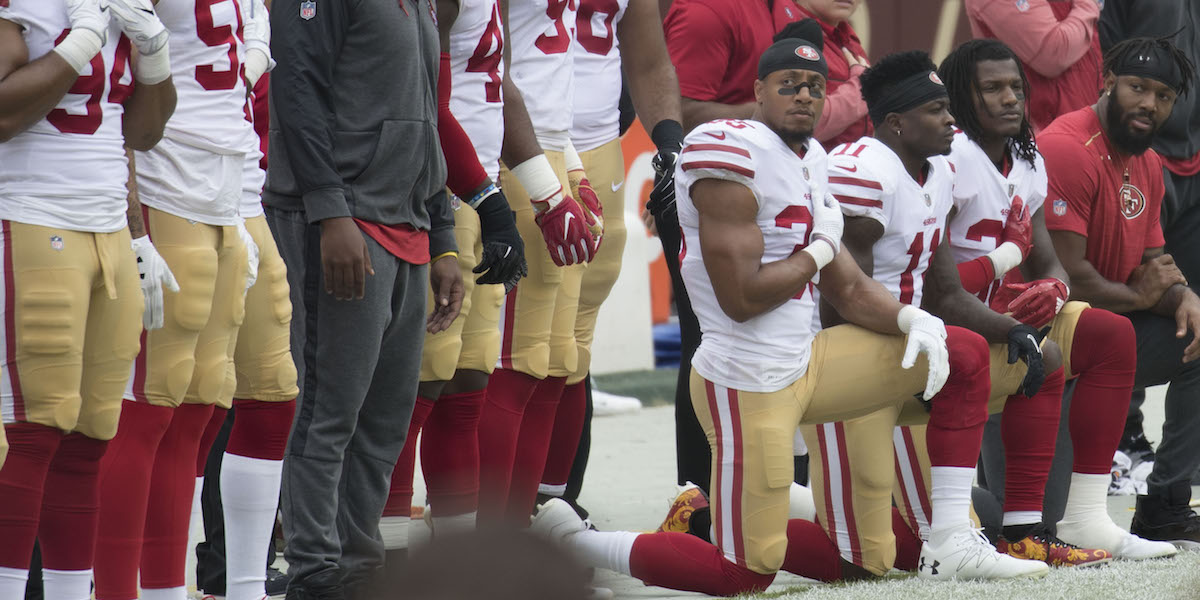 Potential Return of Kneeling for Flag and Anthem “Not Justified”

“No, Roger Goodell, disrespecting the flag is not justified,” said Project 21 Co-Chairman Horace Cooper. “Too many Americans – black, white and brown – have given their lives fighting for our nation’s flag. Neither the NFL nor any organization should let protests or riots be an excuse to encourage this unpatriotic behavior.”

The NFL announced it is reconsidering how it has previously responded to controversies such as kneeling by former player Colin Kaepernick and others during the national anthem. In a social media video, Goodell said, “we were wrong for not listening to NFL players earlier.” He added that he “will be reaching out to players who have raised their voices and others on how we can improve.” In the video, the League also responded to the demand of several prominent players that it admit it was wrong for “silencing our players from peacefully protesting” as well as declare that it “believe[s] black lives matter.”

“The NFL, like other major sports leagues, has seen the direction the wind is blowing and made a calculated risk to chime in on the happenings of the day. I question the sincerity of this move given the history of its hypocrisy on other matters such as the relocation of its franchises,” said Project 21 member Martin Baker. “This is a move to ingratiate itself to the over 70% of the league’s players who are black. This also is an attempt to entice those younger protestors who sympathize with the struggle to buy League merchandise. The NFL will apparently allow traffic to be stopped as long as people aren’t blocked from getting into its stadiums or fan shops. This is not for the sake of humanity, but careful insurance against risk of dividend fallout – a classic case of the affluenza of billionaires who just do not get it.”

“As a black mother, my heart aches every time I think of George Floyd calling out for his own mother with his last breaths of life. But kneeling against the flag in the NFL is not in earnest when its main objective is directed – as it often has been – at vilifying the president,” said Project 21 member Donna Jackson. “The protest against police brutality began in Minneapolis, which has a liberal mayor, city council and governor. Now it is being used to further hatred and animosity against a president who had nothing to do with the killing of George Floyd. This shows that kneeling is just another tool aimed at furthering a political agenda.”

Washington Redskins running back Adrian Peterson said he will “[w]ithout a doubt” be kneeling when the NFL resumes play, adding that he expects other players to join him in on-field social justice protests. New Orleans Saints quarterback Drew Brees was harshly criticized for opposing protests against the American flag, and later apologized for his comments.

“The NFL is committing economic suicide. Americans don’t want politics injected into sports or entertainment,” said Project 21 Co-Chairman Stacy Washington. “As more connections are made between the violent riots and property destruction and the Black Lives Matter movement, the NFL will grow to regret bowing to their demands.”

“The NFL should find ways to help heal and promote American unity. Endorsing hatred toward our flag is the exact opposite,” Cooper added.