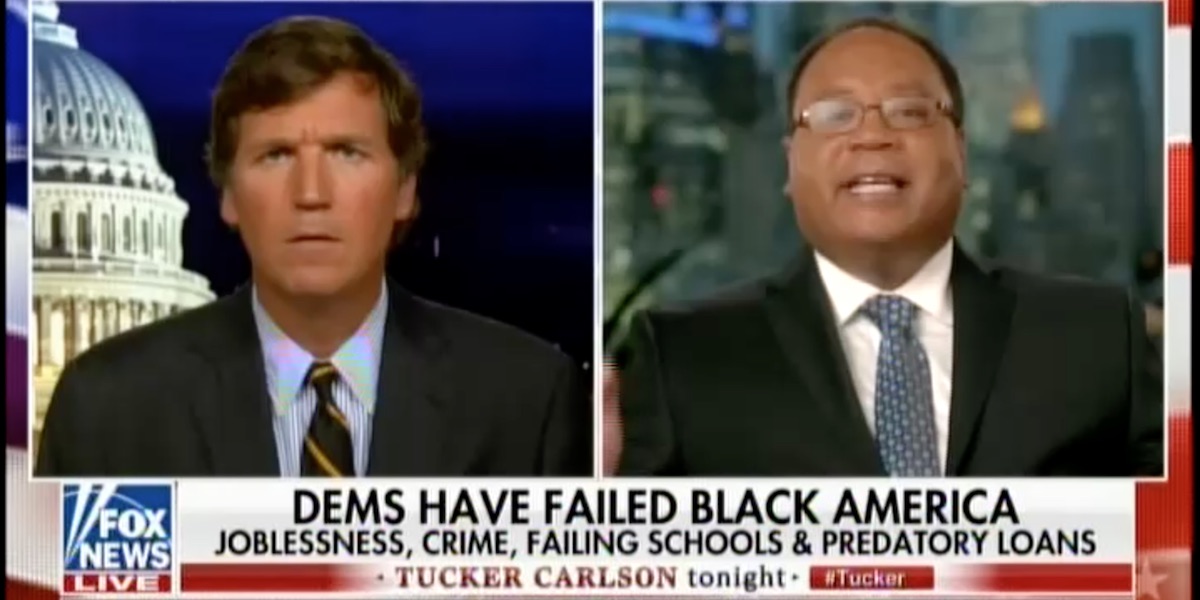 09 Jun 2020 Obama Could Have Been an Example, but Instead He Took Hope Away, Says Horace Cooper

In what Tucker Carlson called “about the best summation as I’ve heard,” Project 21 Co-Chairman Horace Cooper laid out how alleged “problem-solvers” can be blamed for the problems that are tearing at the very fibers of America.

On the Fox News Channel program “Tucker Carlson Tonight,” Horace explained that black Americans had above-average levels of family stability, educational attainment and literacy just prior to the advent of social justice policies that were enacted to solve society’s problems. Yet these policies have largely made things worse:

Why aren’t we encouraging people to strive, achieve, make improvements? There was a time from the 1920s up to the 1950s when black Americans were actually more literate, more likely to graduate from high school, more likely to have stable families than the population as a whole.

Is that by design? Horace noted that worsening problems for black America benefits the problem-solvers:

We need victims. There is a class of Americans whose entire livelihood is based on the existence of victims.  If people got a good education, if people had great jobs, if people controlled their own lives, a whole large number of people couldn’t get that new Volvo; they couldn’t go to Aspen for their ski trip.

There is a strong sentiment among the so-called problem-solving class to keep things as they are.

We’ve spent $22 trillion, and all we’ve done is enriched the problem-solving class. And we’ve not done the basic kinds of things that would be good for Americans – black, white or brown.

Horace noted how his own upbringing helped him build morals and values as well as understand the need for a good education. But problem-solvers like Barack Obama – who was twice elected president – have “taken hope away” from too many people. He noted how Obama’s now downplays his own up-from-adversity success story:

We had a president, a black man, a man who came from circumstances of struggle, rose up and got to be president. He is an example of what’s possible in America. And instead of telling people that, he said, “America: It’s a place where you don’t have a chance.” He said, “you can try all you want but it’s not gonna work out for you.” And that has taken hope away.

“We pretend like what we see today is the way that it always been,” Horace said about those who prescribe to Black Lives Matter pessimism. “It’s just the way that it’s been since the problem-solvers have been in charge.”

I enjoyed the segment tonight. I’ve never heard of Project 21 but it sounds like you have some very smart people in charge. Please keep up the good work.

@TuckerCarlson Horace Cooper, how great are you. You should be on every night. Reasonable sensible positions.

@Project21News So very true, Horace and heartbreaking that @BarackObama wasted an opportunity to lift up the black community in particular. There were so many “you deserve” speeches. We all have to pull ourselves ourselves up by own bootstraps!! And blacks r completely capable!!

Excellent job, Horace Cooper, in articulating and clarifying a mounting dilemma that is fueled by many who promote and use victimization as their lifeblood. Thank you for speaking out!

Horace was awesome….have never heard damage #44 did more clearly defined than Horace did tonight said as a black president #44 told black population there was no hope for them in our country…never thought of it this way how awful it must have been to hear that for 8 yrs