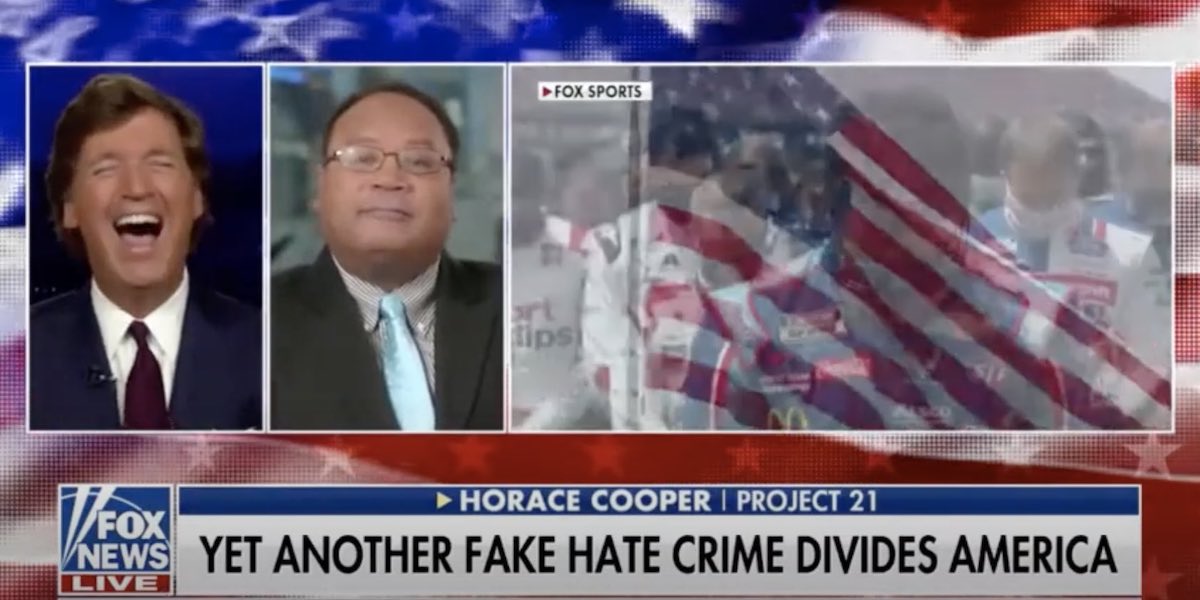 When Bubba Wallace – the only full-time black NASCAR driver – asked the motorsport’s leadership to ban Confederate Battle Flags from races, NASCAR acquiesced despite opposition from many fans. Even though NASCAR rejected gun advertisements last year, it did nothing to prevent Wallace from painting “#BlackLivesMatter” on his car this year.

And when a noose was reportedly found in Wallace’s assigned garage at the Talladega Superspeedway, every driver participating in that race helped push Wallace’s car out to the track in a show of overwhelming support. Still bitter, Wallace suggested the noose was retaliation by “simple-minded people” who are “afraid of change.”

Yet that is not the case. There were 15 FBI agents dispatched to investigate the noose, and they determined the rope in question had been there for months before the garage was randomly assigned to Wallace. The noose was not a symbol of hate – probably just something installed by workmen as a way to help people open and close the garage door.

But, as Fox News Channel host Tucker Carlson said on his show, people “rushed in to believe an absurd story because it could be used to advance a political agenda.”

Project 21 Co-Chairman Horace Cooper, a guest on Carlson’s program, agreed. He explained that there is a “grand delusion that racism is running rampant in America.” His reminder of a similar event moved the normally staid Carlson to laughter:

America isn’t a racist country. In fact, racism is so hard to find you have to create these circumstances in order to find one.

You remember that guy in Chicago? He had to hire foreigners to do the racism… that America just won’t do.

Horace was of course referencing last year’s high-profile hoax perpetrated by actor Jussie Smollett. After giving a hearty laugh, Carlson remarked: “I wish I thought of that. So good!”

On a serious note, Horace highlighted a disparity intentionally being created among the races. Certain minorities, to their detriment, are being held to a different standard to aid those seeking to exploit disunity for political gain. These race hustlers are using unrest to perpetuate their power:

Whether you’re black, white, brown, gay, straight, male, female – all Americans occasionally find they have struggles and setbacks. But, because of this narrative, only a few groups are allowed to experience their struggles and their setbacks and their difficulties.

It’s not racism. It’s not bigotry. America is an amazing place. But, as our economy has changed, our elites haven’t responded to those changes. And they tell poor people – mostly white – too bad for you.

Finding racism where there is none, as appears to be the case with Bubba Wallace and the rope in his garage, is a typical tactic of those elites. Wallace, who has rejected the FBI’s conclusion, is now only feeding into the division Horace warned Carlson about during the segment.