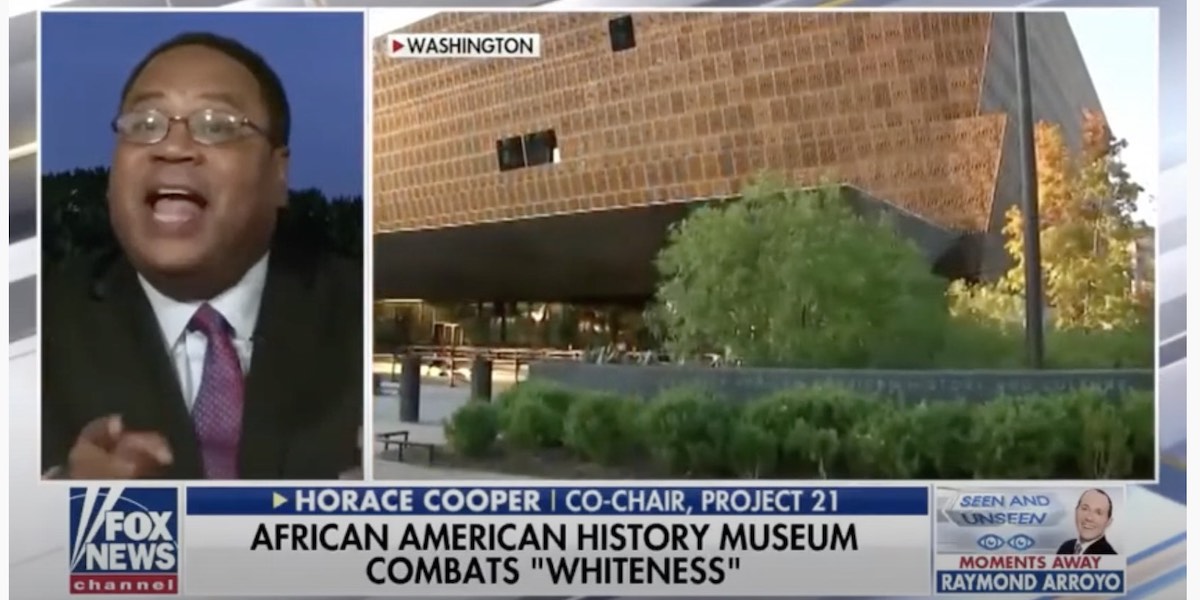 The Smithsonian National Museum of African American History and Culture has produced educational materials about “whiteness.” Its website promotes alleged premises of white privilege and systemic American racism used against blacks and other minorities. And, as Fox News Channel host Laura Ingraham noted, “you – the American taxpayer – are paying for it.”

Project 21 Co-Chairman Horace Cooper recently faced off against a very smug and quite disrespectful Scotty Smart on “The Ingraham Angle” about the appropriateness of a public museum suggesting that alleged virtues attributed to white people – including “hard work,” the goal of a “nuclear family” and “respect[ing] authority” – are specific to a “white culture” to which other races in America are “compared.”

Horace remarked: “The norm that you are presenting as mainstream is extremely radical and… a result of a lack of understanding of actual history.”

Smart began by saying that he didn’t like Fox News “pitting blacks against each other.” But then he turned on Horace, calling him “that token black friend that only a few white people have.” Ingraham rebuked Smart, saying that his comments were “backhanded” and “dehumanizing.” Yet Smart doubled-down, claiming that it is “not the norm” for blacks to share Horace’s values. He again suggested that a critical discussion of radical racial ideas are “not a conversation two black men should be having.”

Pointing out that addressing the facts about the museum’s polemic is “exactly what I want to do,” Horace added:

I would like to focus here on the facts…

One of my museums that I enjoy the most is the Smithsonian Museum of American History. It is not a place where you go and you learn all about how evil America is… What you learn about are all of the great things that are in America.

If you want some context, if you’re gonna have this museum, where is the part about slavery? Because today, on Planet Earth, in Africa, dominated by black people, that is ground zero of where slavery is. And if you had a history museum about it, it would show the role that those countries and that continent played in getting it started in the rest of history.

That’s the fact, and it has nothing to do with tokenism.

But the National Museum of African American History and Culture seems to be operating without that perspective – feeding detrimental fringe elements that are trying to dominate the discussion about race. And public money is paying for this endeavor:

So you have a $500 million… structure/edifice that apparently thinks its purpose is to offer advice to cripple black America.

To say to black America the very tools that black Americans, like white Americans, have used to succeed and become prosperous – hard work, tenacity, faith, the types of success skills that work – to call those somehow a racial category would make David Duke proud.

This is really, really sad if that’s the direction this museum is trying to go.

After backlash from people such as Horace, the museum has removed some of the controversial information from its website.

Rather than “pushing [white privilege] under the rug” as Smart suggested, Horace explained that Smart and the Smithsonian were actually silencing the voices of the vast majority of Americans – including black Americans – who respect and follow the norms that are now being pushed as part of an oppressive white culture:

The radical view that you are expressing is actually the minority view. That is not the popular view.

Responding to Smart’s claims, Horace retorted: “So let’s stick with you have an opinion – you have a radical, minority opinion – but it’s just an opinion. Not informed by history at all.”