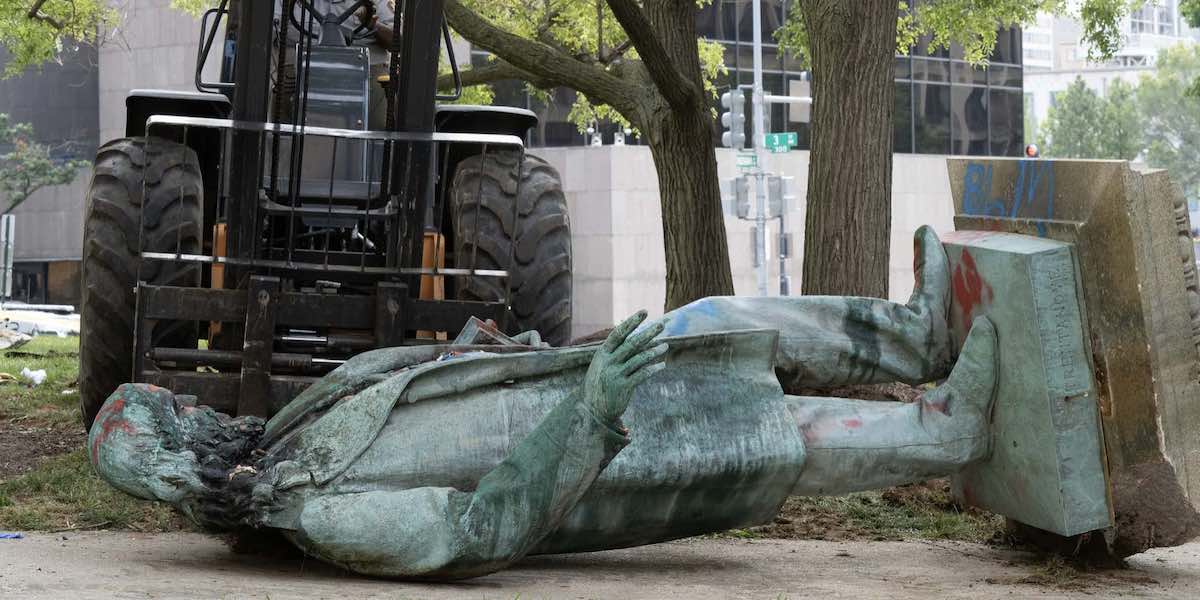 Asked if things in America are getting better or worse, Project 21 Co-Chairman Horace Cooper told former Trump advisor Sebastian Gorka on his “America First” podcast that it’s “not an easy question to answer.”

While President Donald Trump has been correct about the intentions of radicals and the threats they pose, the ways in which they are dragging American culture to the political fringe of the left is a clear and present danger to the republic.

It’s not clear right now if these radicals can be stopped.

A particular problem is that the leftist mob wants to erase history. While doing so may make some fragile individuals feel better today, it threatens tomorrow by completely ignoring the value of learning from history – both our mistakes and successes.

“One of the ways we learn about our past and our future plans is to understand who we are as a people and what our history has been,” Horace explained. “When we erase that, you run the risk that you’re going to have to start over again.”

Directly addressing the idea that certain statues – such as those of Confederate military leaders – may be misdirected praise, Horace still opposed the mob’s demand that they be toppled. If it is absolutely necessary and popular to do so, Horace pointed out, there is a “lawful legitimate process” to do so instead of relying on ropes and spray paint.

Speaking to the issue of Civil War memorials and monuments, Horace noted that history shows how reconciliation was an important part of post-war reconstruction. He recounted how the United States defeated England, Germany and Japan in bloody, divisive wars, yet now counts those countries as allies after compassionate reconciliation processes.

This is what similarly happened with the reformed, post-war United States after “the war where more Americans lost their lives” than any other:

This idea that, after a civil war that cost us so much, the way that we should respond to that is to make sure we stomp on, that we step on and that we crush from now until eternity all vestiges of that idea, that concept and that existence [of the losing side] – that’s contrary to any notion of how reconciliation works after a war.

Despite the spirit of reconciliation that led to the creation of Confederate monuments and memorials – not a desire to make them “billboards for racism” – there is now a movement afoot to prolong violence throughout America until they are all gone.

“I’ve been waiting six weeks for that answer,” Gorka said. Pointing out his own career as a national security expert, he nonetheless said that this idea of reconciliation and its enduring importance “didn’t come t0 me.”

“But it came to this man,” Gorka said about Horace.

And now it doesn’t even seem that the removal of any and all Civil War remembrances will be the end of the left’s campaign for the erasure of American history. It’s not like this threat to statues wasn’t foreseen by President Trump, as Horace noted:

There is no limiting principle on what these radicals want to do when it comes to erasure.

Well, it turns out the president was right. And there is no sign of any limit on what they want to erase. And that’s not good news.

Reasons for Conservatives to Give Thanks

Amidst COVID-19 chaos and the presidential election, Project 21 member Donna Jackson notes that it “has been challenging for all …
Read More

Still Plenty of Reasons for Conservatives to Be Thankful, by Donna Jackson

Lockdowns for churchgoers but not protesters. Election fraud. Media bias and social media censorship that’s been worse than ever. You …
Read More