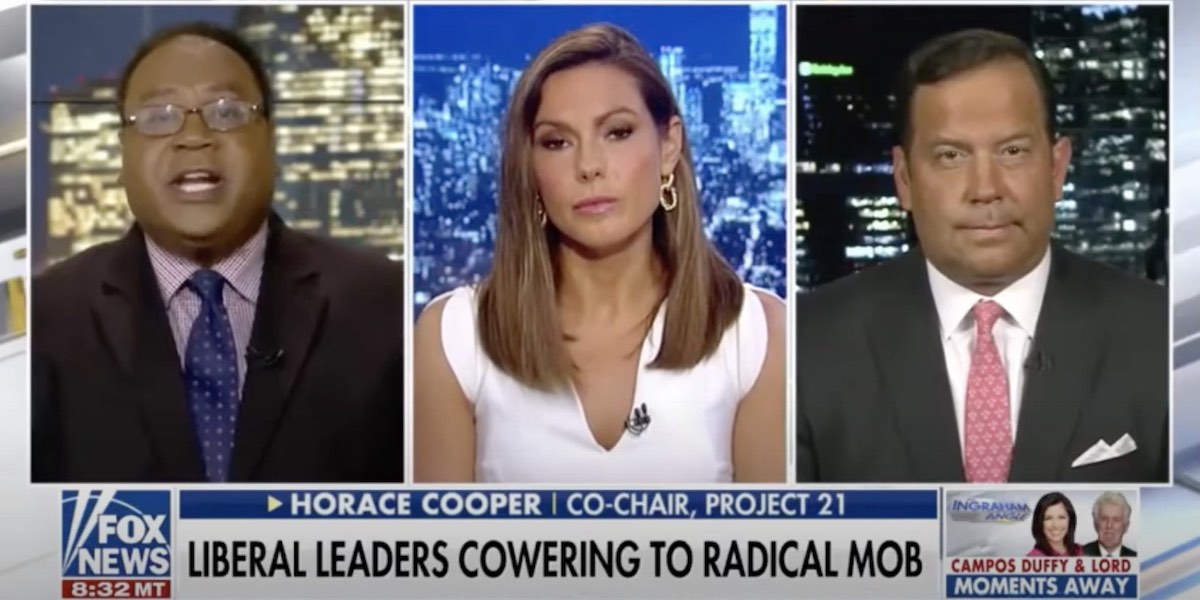 27 Jul 2020 All the Leftists Have Left is Racial Politics

Is there anything to the leftist narrative that the White House is trying to start a race war?

Considering the efforts of this administration to try to lower the unemployment rate for all – and having been particularly effective in the black community up until the upheaval of the COVID-19 pandemic – an objective analysis would suggest not.

Yet Project 21 Co-Chairman Horace Cooper, on a recent edition of the Fox News Channel’s “The Ingraham Angle,” noted that the left is still trying to motivate people with horrific racial rhetoric because it is “all they have to offer” in making the case for their radical redesign of America.

Discussing the prolonged race-dominated rioting in American cities that has led to the vandalism of statues of people uninvolved in (or even against) slavery and racism, in addition to societal shifts occurring far from concerns about police conduct, guest host Lisa Boothe said she’s “starting to get the sense that this isn’t about the Confederacy or racism.”

With this in mind, and noting how liberal fringe politicians get pushback no matter how much they concede, Boothe asked Horace: “So why does the left try to appease the mob when they clearly cannot be appeased?”

The left is the mob. That’s exactly the problem.

You see, this is not about the tragic death of George Floyd. This is about the cancel culture having an opportunity and taking the advantage.

Black Americans have not said – universally – that their big problem that they face every day is that they see an occasional Confederate statue or that there’s a military base named after a former Confederate general or leader.

What really matters in America – black, white or brown – are the kinds of things that the cancel culture could care less about.

The amazing, amazing thing about how the cancel culture is getting away with pushing its radical agenda and, in light of all of the scrutiny that America is saying that it wants to pay attention to, that these issues have moved front and center.

This is just a good example of them never letting an opportunity to do the radical thing go by.

Boothe played a clip from U.S. Representative Bobby Rush, who claimed that “Trump wants to instigate a race war.”

While fellow guest Steve Cortez, a talk radio host in Chicago, warned that this is a way to escalate tensions and justify a serious upgrade in leftist-inspired violence, Horace pointed out that the left cannot win on the merits of its policies. So it is using the specter of a “race war” to try to maintain political credibility. But this is tired rhetoric:

I just want to understand: Was Bull Connor trying to achieve a race war? What about Governor Orval Faubus? When the President of the United States, Dwight Eisenhower, was forced to send in a federal force to ensure that the rights of Americans were protected, is this what I’m hearing Bobby Rush say? Is this what I’m hearing the modern progressives say?