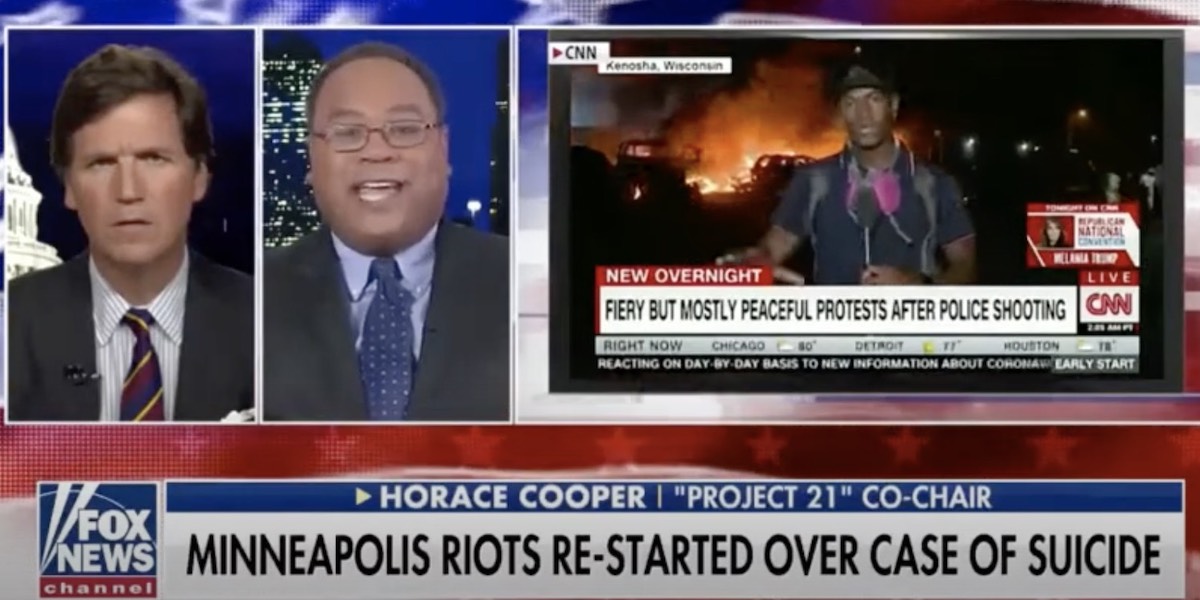 As American cities burn and businesses are destroyed, the media is brazenly portraying rioting and looting as peaceful. Even when the violence is undeniable, like when MSNBC’s Ali Velshi reported in front a burning building in Minneapolis, the level of chaos and its consequences are downplayed. In that particular instance, Velshi suggested to viewers that things were “not, generally speaking, unruly.”

Except, of course, for the burning building. And this practice of portraying violence as mostly peaceful is being played out in cities across America – from Richmond, Virginia to Seattle, Washington.

On the Fox News Channel’s “Tucker Carlson Tonight,” Carlson asked Project 21 Co-Chairman Horace Cooper: “Who is helped by transparent lying?” and “What’s the upside” for the media to water down their coverage of anarchy?

Horace said misreporting helps the “problem-solving class” that is seeking to promote the left-wing agenda of the rioters through calmer means. And the media aids them by advancing a narrative that this is simply unrest instead of outright mayhem:

It is remarkable how this behavior, which is so harmful to the American people, and particularly to the minority community, is being promoted as a positive by our media.

Carlson told Horace that he made “such as smart point.”

Horace injected some humor into his analysis of the situation:

Clearly, the problem-solving class benefits from it. But not the people who pay the bills. And not the people for whom these services are supposed to be provided.

When it’s “fiery, but peaceful,” it’s reminiscent to me of someone saying, “Hey, drink this glass of water – I’ve just put a couple of taps of urine in it, but it’s mostly water.”

A little bit of something bad ruins things.

Horace also pointed out that the mob’s behavior creates winners and losers, with those who are the most at risk suffering the greatest:

Earlier this year, the National Center’s Free Enterprise Project (FEP) took this media bias issue to the annual shareholder meeting of Comcast, MSNBC’s parent company. Presented with the Velshi segment by an FEP representative, CEO Brian Roberts said, “I think the coverage continues to inform and educate our society.”

Obviously, in this case, the media and its bosses have indicated they see no reason to end their complicit behavior.

To read the Fox News article about this interview of Project 21’s Horace Cooper by Tucker Carlson, click here.