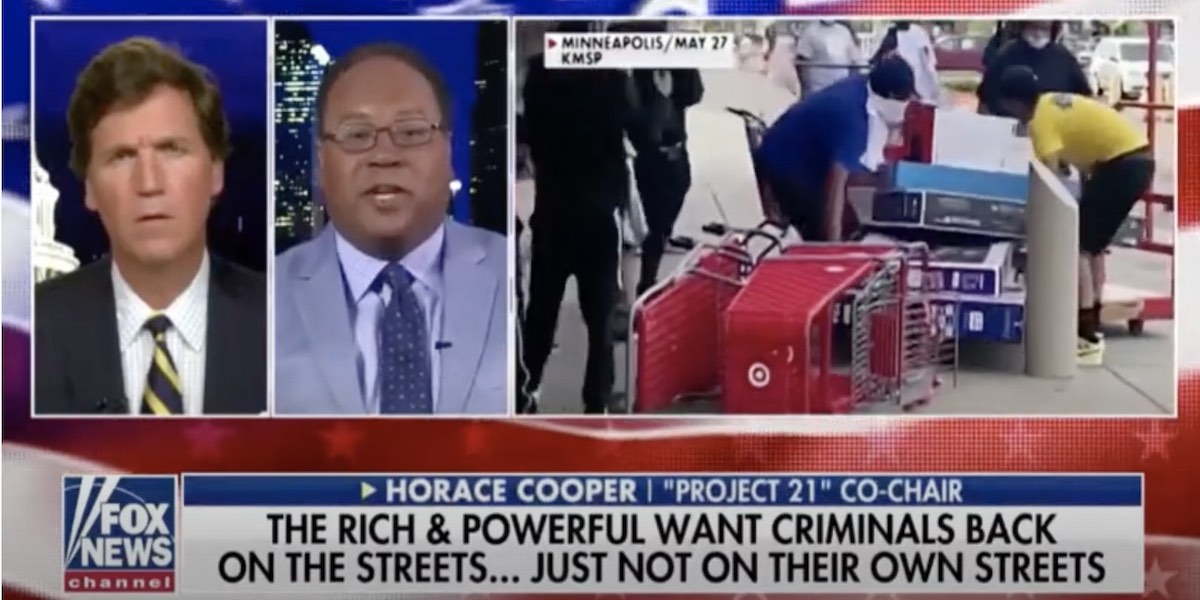 In commentaries for the Daily Caller and Newsmax, Project 21 Co-Chairman Horace Cooper has defended the cash bail component of our criminal justice system as “essential.” And the painful consequences faced by communities that have implemented so-called “bail reform” show the wisdom of his position.

In a segment of “Tucker Carlson Tonight” on the Fox News Channel, Tucker presented an example of the bail reform agenda gone horribly wrong. Horace called the abuse of this valuable protection “a radical assault on our criminal justice system.”

The example involved The Bail Project, which states its mission as “disrupting the money bail system – one person at a time.” For example, the group paid the $5,000 cash bail for Christopher Stewart to get out of the Cook County Jail after the convicted felon was caught illegally possessing a handgun. They consider such deeds “an act of resistance against a system that criminalizes race and poverty and an act of solidarity with local communities and movements for decarceration.” But Stewart was back in in jail within a month on charges of attempted murder after he violated an order of protection against him and allegedly set the victim’s apartment on fire while she was in it.

Horace was explicit in his condemnation of the attack on this very important part of the judicial process as well as the lack of media attention to those who want to get rid of it:

Too many of our cities… are suffering. These groups are a cancer on American society. And that’s something – if we had a working, trustworthy media, they’d be giving a lot more attention to it.

While groups like The Bail Project claim they are implementing an anti-racist agenda, Horace explained that their premise blindly casts aspersions on people because of their race and class while helping hardened criminals continue to engage in their mayhem:

[This agenda] is apparently predicated on the theory that – if you are poor, if you are a minority – you have no choice and no control and you are forced to engage in many of these acts of wanton and violent crime.

The problem with that is the data shows exactly the opposite.

It is a few people who have decided that the rules don’t apply to them. And The Bail Project and projects like it say to those people: “Guess what? We’ve got your back!”

Well, who’s got the back of the families and the victims and the communities? You were right to note that cities like Detroit or even Washington, D.C. took decades if [not] longer [to recover] after the rioting and looting and destruction that occur where crime is allowed to run rampant.

And letting hardened criminals like Stewart out on the streets again seems to be part of a radical agenda aimed more at tearing America down when it needs to be built up to help create opportunities for everyone:

The goal here is to actually to attack – directly – the very criminal justice system that makes it possible for the rest of us to carry out our lives… We forgot that, in the early 1950s, many of these radical ideas were pushed – and they went into effect in the 1960s. It took until the 1980s for the political system, the American system, the American people to come together and say “wait a second.”

Decriminalization. Looking the other way. It doesn’t work. And we’ve had nearly 30 years of benefit from rejecting that craziness.

Complacency, he said, has allowed bail reform problems to fester.

The problem is that – because we’ve had it good for so long – people aren’t noticing that we’re experiencing a crime epidemic in too many of our cities. Groups like these are poison. They are, to civil rights and justice what an arsonist is to forest management.

Tucker, who has Horace on his show regularly, called that a “really wise point.”

Click here to read The Daily Caller’s coverage of this segment of Tucker’s program.