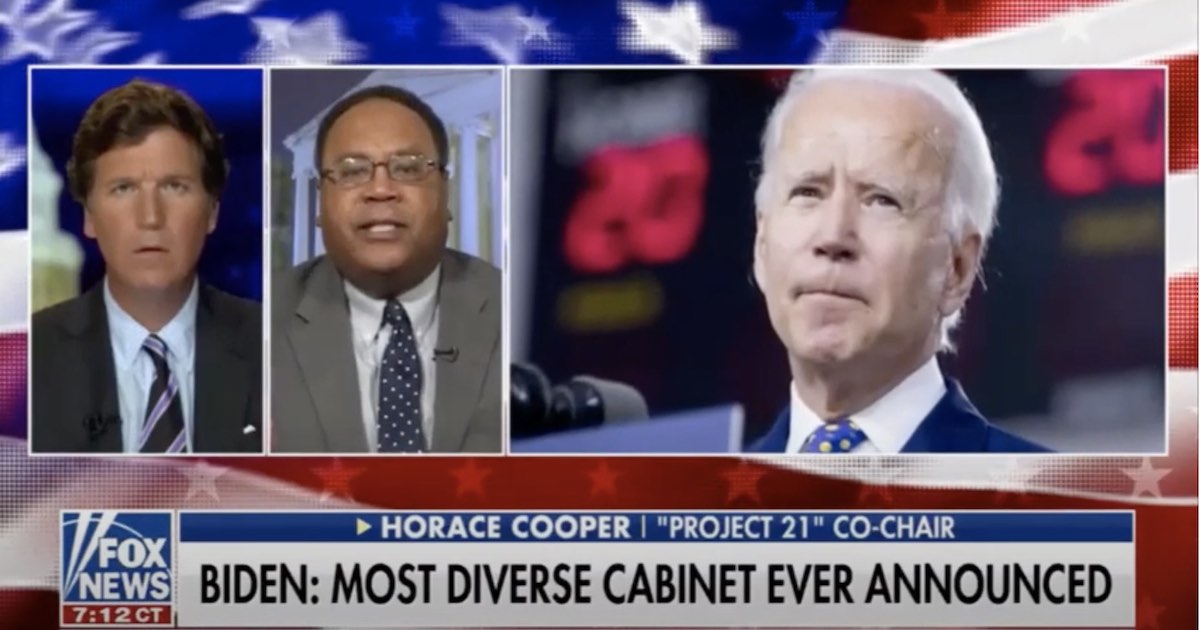 In assembling his anticipated presidential cabinet, Joe Biden appears to be more focused on how his top advisors look than how they might perform. And yet there are still some critics to his left who don’t think he is being “diverse” enough in his picks.

“This is the triumph of this idea that who we look like is far more important than who we actually are,” Horace commented during an interview with Fox News Channel host Tucker Carlson, who lauded Horace for his “clarity” on the issue.

Horace noted that a member of President Ronald Reagan’s cabinet quit more than 37 years ago due to outcry over his public classification of members of a government panel by their intersectional values. What was once grounds for scandal, Horace contended, is now embraced:

You know, Vice President Biden probably needs to issue an apology to former Reagan Interior Secretary James Watt – who was lambasted for talking about an advisory committee constituting having a black, a Jew and “a cripple.” This mindset that led to that lambasting is exactly what we are seeing today. Which is, it’s a reversal. We now are exalting this behavior…

[M]y grandparents joined together – whites and blacks, their generation – to change America so that we are not looked at by the color of our skin or some DNA type. But instead [we are] supposed to be judged – as Martin Luther King said – by the content of our character.

Carlson noted that liberals, in judging progress by sheer numbers, demand “exactly the opposite” of what the Civil Rights Movement sought to accomplish. He asked Horace: “When was the turning point?”

Horace pointed out that, while PC culture remains a minority viewpoint that is “often pushed back against,” leftists have found valuable allies in the establishment media and social media to help create a culture in which their radical views have been able to influence even the most powerful people and begin to transform American culture:

The Chief Justice of the United States famously said in an opinion that we don’t fix the problem of discrimination on the basis of race by discriminating on the basis of race. I now wonder if he would be comfortable making that statement today, because those that were minority voices challenging this consensus now seem to have triumphed.

And we’re back at a point where it’s “you can’t get a drink out of this water fountain, you can’t attend this school.” You may recall there were [liberals] who said it was good for blacks to be separated.

Horace explained that this movement to reemphasize the importance of race and other intersectional traits over the goal of an American melting pot can have a crippling impact on American exceptionalism and the ability for people to get the most from the American experience:

We learned that we’re missing out on the great achievements, the great artists, the great mysteries being solved in science and disease because we’re limiting who can participate based on some physical attribute that tells us nothing about those individuals.

Now, of course, we’re gonna come back to that phase where those are going to be the sole attributes.

Good luck with solving so many of the challenges we will face in the future, if this is the mindset we maintain.