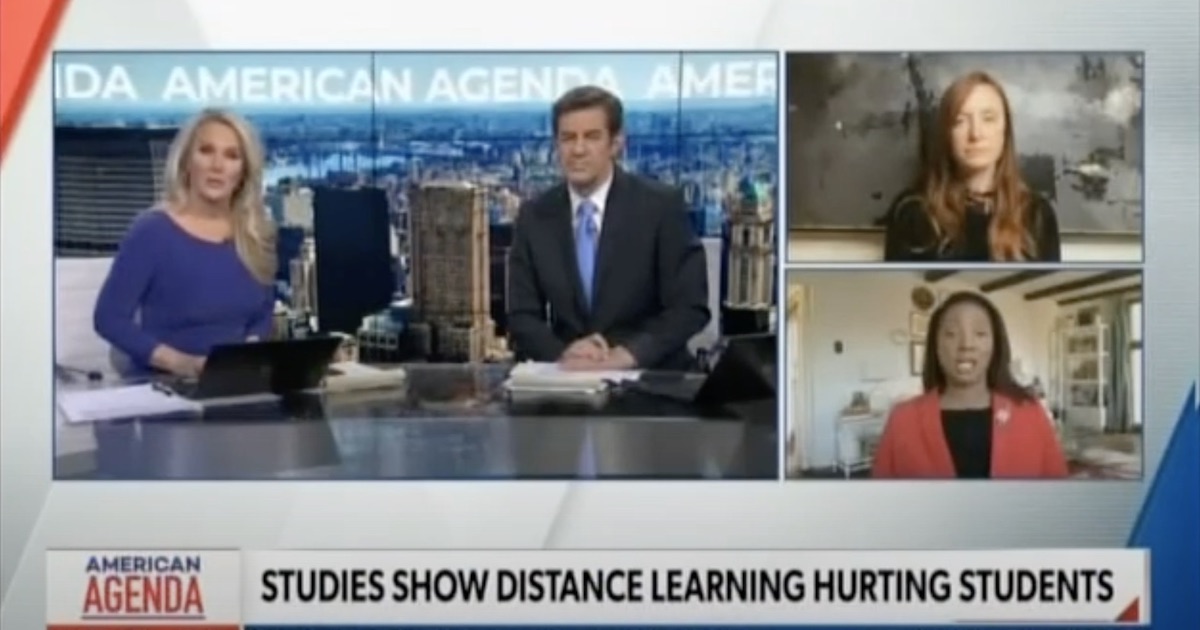 “At this point, the only solution that I can think of that makes sense is throwing more money at schools.”

A liberal activist actually said that out loud during a panel discussion with Project 21 Co-Chairman Stacy Washington on Newsmax’s “American Agenda.”

Emboldened liberals – seemingly energized by pandemic restrictions – have come a long way from the nuanced rhetoric of just a few years ago.

After Stacy pointed out how kids who had previously posted good grades are now failing due to a lack of in-school learning, and argued that kids can and should go back to class, Jessica DeLoach took the side of Big Government and teachers unions that appear to put the needs of the children far behind the interests of teachers and administrators.

Stacy, who lives in suburban St. Louis, noted that the higher standards under which private schools operate have given her daughter – who attends a private Christian school – a better education during the COVID-19 pandemic:

[A]ll of the private schools in the St. Louis metro area are open. All of the public schools are on some sort of variation of remote learning. So it’s a stark difference.

DeLoach sided with the teachers. She remarked that the unions are “beholden to teachers.”

In assessing the situation facing families that are burdened with virtual educational formats poorly suited for their needs, Stacy said:

One of the things that I noticed is there are some smaller, local news stories that talk about how many kids are getting Fs. So this is a recent phenomenon. We’re not talking about kids who were always falling between the cracks. These are kids who were doing well last school year who are currently earning Fs in school because they’re learning virtually.

And this is not because the parents aren’t working hard to provide them access or they don’t have the Internet or that they’re not actually attending the classes. We’re talking about the kids who are actually in front of their screens, paying attention and still not getting the content.

And so the issue here is that parents aren’t being heard. Parents are asking for their kids to be back in the classroom. Their taxes are still going to pay the teachers. But they’re not being listened to.

Further, Stacy pointed out that school systems are not following the science:

[T]he CDC guidance on this and Dr. Fauci both agree that kids can be in the classroom because it’s the least likely place for them to actually contract coronavirus. They’re not a high-risk category.

Showing that she was not just reading from talking points, Stacy personally attested to the safety of in-school learning during the pandemic:

Now, it kind of was a little bit of a struggle with the county guidelines, but they have remained open this entire time and our daughter has had in-school instruction.

Now, the reason they did this is because they’re beholden to us because we pay the tuition. We will not have our checks or our bank accounts auto-drafted for our kids learning remotely from home. So they were forced to consider what we want, what parents want, what the high schoolers want.

So those kids – grade levels 7-12 – are in class. And they have plexiglass dividers. They have to wear masks all day. And they’re doing a half-day program, which means they don’t eat lunch at school.

Yet when Newsmax host Bob Sellers – whose wife is a teacher wanting to return to the classroom and who has two high school daughters spending most of their waking hours in front of computer screens – asked for a solution, DeLoach reiterated that teachers unions exist to represent the interests of teachers and that there needs to be an unspecified “proper funding for the right resources.”

It’s time for conservatives – and parents of all political leanings who are concerned about educational quality – to dip into the liberal rhetoric and ask: “Won’t somebody think of the children?”