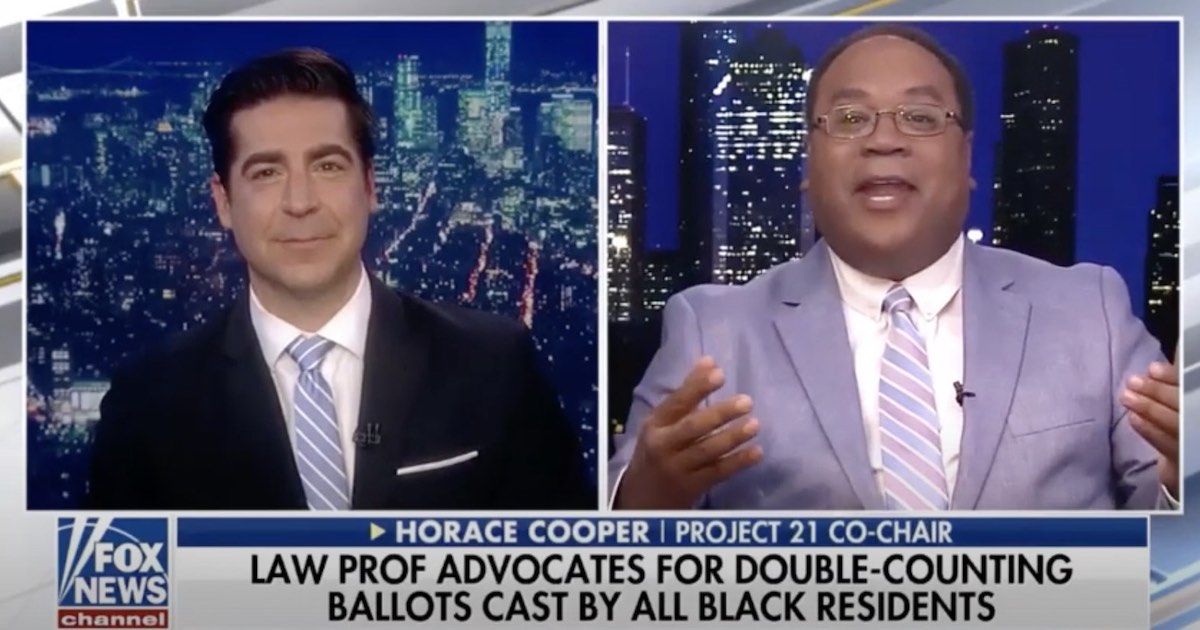 Give leftists the power they desire, and they will behave as if they’ve “partnered with David Duke.”

In a Fox News Channel interview, Project 21 Co-Chairman Horace Cooper called out the “evil” racial revenge that radical academics want to inflict on the American people.

On “The Ingraham Angle,” Horace and guest host Jesse Waters discussed how one law professor suggested, in an essay for The Nation magazine, that we need to “transform how we choose our government” by “double-counting black votes [to] restore electoral balance.”

America is supposed to be based on the idea of one man-one vote.

But now certain races are supposed to have more votes than other races. It’s not just unconstitutional – it goes far afield of the idea that we’re all supposed to be Americans.

In another example, white public school teachers in Seattle are being trained to overthrow America’s alleged “race-based white-supremist society” and “bankrupt [their own] privilege in acknowledgement of [their] thieved inheritance.”

Horace said it is “garbage” for taxpayers to fund extremist political programming that indoctrinates educators about their presumed crimes against Native Americans, misuse of personal pronouns to create new gender norms and the “spirit murder” of black students.

This agenda, Horace pointed out, is no less racist than the behavior opposed by the Civil Rights Movement:

And it doesn’t matter whether, in one case, it’s a white person or a black person. It’s the same evil idea. No one should be expected to step and fetch and bend a knee because someone of another race is coming in.

“Shame on them,” Horace proclaimed. “And frankly, what we really need is to open these schools back up so that these kids can actually get a chance to succeed.”