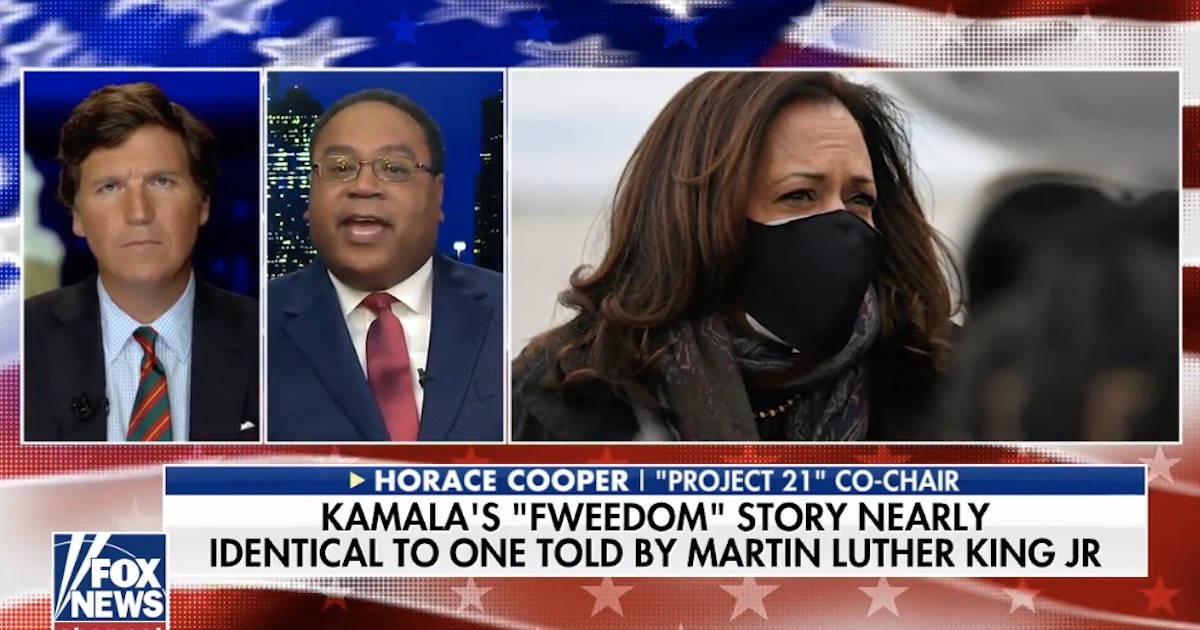 You can’t make this stuff up. Actually, it appears Kamala Harris did.

Harris may have been caught once again making up things about her past. But that probably can’t be avoided after all her time hanging around Joe Biden and his penchant for tall tales, misrepresentations and plagiarism.

On a recent edition of “Tucker Carlson Tonight” on the Fox News Channel, Project 21 Co-Chairman Horace Cooper suggested the runningmates should have campaigned for the White House under the auspices of “the Fabulist Party.”

In this latest instance, it seems that Harris lifted a story once told by Dr. Martin Luther King, Jr. to Playboy magazine – inserting herself as the protagonist in a version of the tale Dr. King told about a little black girl letting a white police officer know she wanted her “fee-dom” at a rally in Birmingham in 1964 or earlier. Harris was born in late 1964. So the Harris story – mentioned in books and interviews about Harris as a toddler demanding her “fweedom” during a protest march with her parents in Oakland in the late 1960s – is likely a sloppy theft from the civil rights icon repertoire, designed to appeal to would-be left-wing supporters.

But her need for “fweedom” would conflict with her family’s American story. Her mother immigrated to the United States from India, which is governed by a strict caste system, to become a respected cancer researcher. And her black father immigrated from Jamaica to go to school and eventually become a successful economist.

“Apparently Kamala knew it when she wasn’t even two or three years of age,” Horace joked:

It’s an amazing thing for her parents to come to America, leaving their home countries, so that they could come to this place – only for their child to know the woke truth, [that] America was this awful place, and why would anyone even want to come here.

It’s true that Harris’s parents were active in the Civil Rights Movement, but their own success is a testament to the American opportunity and exceptionalism that Harris and the rest of the left downplay and demonize. Horace explained to Carlson:

There’s this continuous need to hold this country in contempt.

It isn’t just an accident. It isn’t just a coincidence. There’s this idea that the best way to appeal to America – to take a leadership role in America – is by stomping on America.

And, as Horace pointed out, they are wrong:

Guess what? We are the greatest experiment in self-government that has happened for five centuries. And we continue to improve.

We ought to be celebrated rather than condemned.