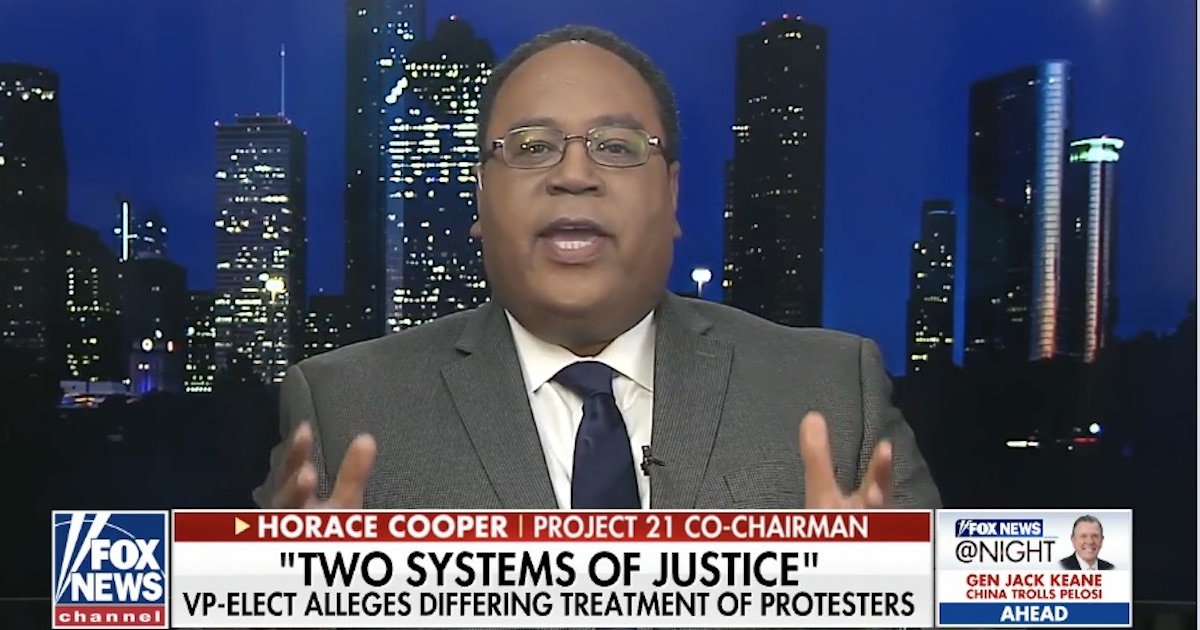 In a press conference that addressed protesters’ recent breach of the U.S. Capitol, Kamala Harris charged that there are “two systems of justice” in America with regard to race. It’s not a new claim for her – she made the same complaint in September to bolster her case about systemic racism.

While he doesn’t agree with the incoming presidential administration or local D.C. politicians on much, Project 21 Co-Chairman Horace Cooper did say “welcome to the law and order side of things” to them during an interview on the Fox News Channel.

While he agrees that the application of justice needs to be uniform, Horace is skeptical that liberals talking the talk now were actually walking the walk when Antifa and Black Lives Matter demonstrators were behind the rioting, looting and mayhem.

In a “Fox News @Night” panel discussion about fallout from the Capitol protest, he said:

I’ve advocated – all this summer, and even prior to that – that we hold people accountable who use the pretext of protest for lawlessness, for engaging in rioting.

A fact check on police response at the Capitol and what has been done to control Antifa and BLM unrest in 2020 indicates that Harris is incorrect in her claim. Tear gas, pepper spray and rubber bullets were used against protesters in both instances. And the number of arrests at the Capitol appears to be higher – along with one police-involved shooting death of a protester and three underreported on-site deaths due to “medical emergencies.”

In a press release, National Center for Public Policy Research President David A. Ridenour called the breach of the Capitol something that “should be denounced by every American as an affront not only to the rule of law but to the tradition of a peaceful transition of power that has existed since our founding.” Released before the Biden-Harris press conference, the statement noted that the protest and the response to it “should also serve as a lesson about the dangers of intemperate language intended to advance political agendas.”

On Fox News, Horace further called out the apparent political double-standard in the handling of this past summer’s protests and the newfound interest in cracking down on dissent:

And when I hear the mayor of D.C. tell me she’s for law and order now, I say: Welcome to the party – but where were you when you were sending this message that it wasn’t important?

Reiterating his support for an equal application of the law toward those who protest above and beyond the protections of the First Amendment, Horace said any newfound “unity” means we “should all focus on the one thing we can agree upon.” That is, of course, if liberals are not just engaged in political posturing.