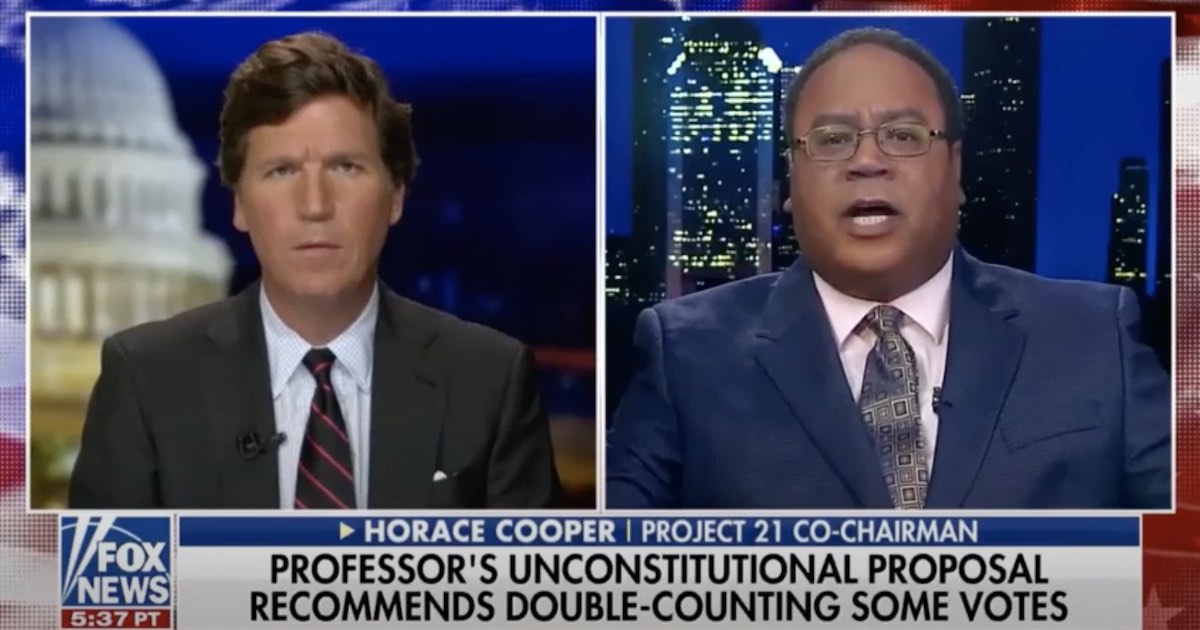 Because the ludicrous is becoming law these days, Tucker Carlson asked Horace Cooper to come on his show to talk about the idea of “vote reparations.”

A dozen years ago, it’s highly unlikely Joe Biden would have said that a genetic male should be allowed to use a women’s locker room or compete in women’s sports just because he thinks he’s a woman. But the proclamation that this is a right, and the governmental enforcement of that belief, was contained in the initial batch of executive orders on day one of Biden’s presidency.

Carlson suggested – and Horace, the co-chairman of the National Center’s Project 21 black leadership network, agreed – that liberals’ embrace of equity over equality is “a pretext for racial discrimination.” And the idea promoted by law professor Brandon Hasbrouck that black and Native American votes should be double-counted as an equitable means of “achieving a racially just society” couldn’t be more discriminatory.

This is really insidious. This, however, is what we get when we have not allowed the kind of criticism that needs to occur… [regarding those] who have been saying over and over again that America is more racist or as racist as it has ever been. And denying any progress.

Allocating more votes to a group of people because of their skin color would obviously create divisiveness – contradicting Biden’s claim that he wants “unity.” But, since his new presidential administration has also controversially cancelled the 1776 Commission and reinstituted critical race theory in federal training among its first acts, even something as extreme as vote reparations cannot be ruled out as something they might embrace further down the road.

Pointing out the historical ignorance of vote reparations and other race-based policies, Horace noted:

Like those old segregationists of yore, some of them went around saying that they wanted to keep us separate because it was good for us. They were actually trying to help us. Others did it because they thought it was politically salient to do it.

Horace first rebutted the idea of vote reparations in a National Review essay entitled “An Absurd Call for ‘Vote Reparations.’” Click here to read it.