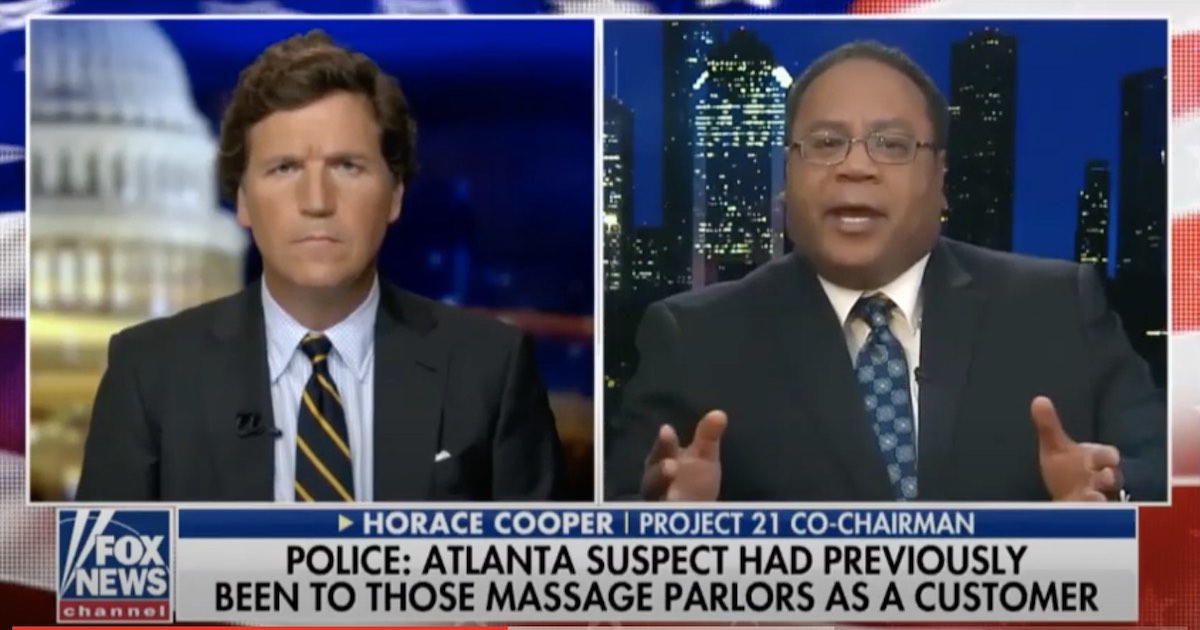 While the alleged shooter in the recent Atlanta massage parlor murders has reportedly said his motivation was sexual, the media and liberal activists – with adherents located as far up as the Oval Office – are trying to push the narrative of a racial motivation.

Project 21 Co-Chairman Horace Cooper called this narrative “dangerous” and “toxic.” In an interview with Tucker Carlson on the Fox News Channel, he noted that the left is doing everything it can to promote a racial message, ignoring the lack of facts upon which such a claim could be based.

“It looks like the left has a problem,” Horace said. “Their coalition is actually at war with itself.”

If you say “let’s defund the police,” if you say “let’s allow untold number of migrants from other countries to come in and compete with working-class people,” if you divide us along intersectional lines – all of those complete with one another.

By focusing on race, the left provides itself with “a way to reinforce what it already believes,” said Horace. In fact, and disturbingly, the left can’t see things any other way:

[W]hat you see is this story has to be true. It’s too good not to be true.

But such a claim cannot be proven:

[They] believe the biggest threat to America today – the biggest – is white men who are going to attack you at any time you are vulnerable.

The description of the person who is most likely to rob you, rape you or in some way violate your property rights in a dangerous way is not a white male…

We don’t focus on the group itself.  But if the media – that says that they can pick a racial narrative to explain things – had ignored for 25 years that the poor failing schools, the poor employment options that are presented and the way that they have preferred elites in America over the mainstream have contributed to a very very toxic circumstance that is easily exploited by groups like Black Lives Matter and others that are promoting their intersectional rivalry.

The victim of the left’s civil war with its own factions, facts and logic is the racial harmony for which it claims to strive. This creates a potential flashpoint that worries Horace:

It is toxic. It’s dangerous. Unfortunately for us, the mainstream media thinks this story is so good we just need to repeat it even when it falls apart right in front of our eyes.