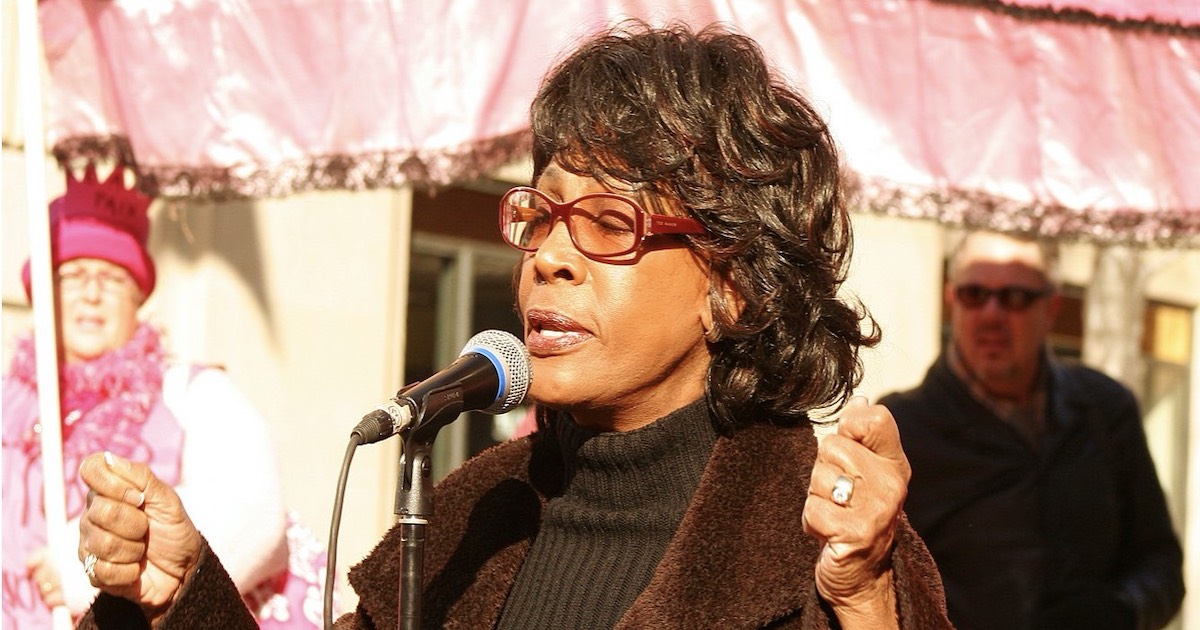 After arriving in Brooklyn Center – the Minneapolis suburb where Daunte Wright died during a fight with local police – reportedly with her own police escort, Congresswoman Maxine Waters proceeded to say things that may raise tensions there even higher.

The region is already bracing for the upcoming verdict in the case of former officer Derek Chauvin related to the death of George Floyd. It’s also experiencing riots related to Wright’s death.

At the event, Waters said about the Floyd case: “We’re looking for a guilty verdict, and we’re looking to see if all of the talk that took place and has been taking place after they saw what happened to George Floyd. If nothing does not happen, then we know that we got to not only stay in the street, but we have got to fight for justice.”

Commenting on the riots, she added: “We got to stay on the street. And we’ve got to get more active, we’ve got to get more confrontational. We’ve got to make sure that they know that we mean business.” Taking issue with an imposed curfew, Waters remarked: “I don’t think anything about curfew. Curfew means I want you all to stop talking… I don’t agree with that.”

While this explosive rhetoric is inflaming tensions in the Twin Cities, it has possibly also earned her censure in the U.S. House of Representatives – where concerns about “insurrection” have been a focus of lawmakers since January 6.

Members of the National Center’s Project 21 black leadership network are taking Congresswoman Waters to task for her divisive and destructive comments.

Maxine Waters should be ashamed of herself.

Now in her 15th term in Congress, her comments may result in an appeal of the most galvanized racial justice case in years. It further validates the need for term limits.

Her racially divisive tactics may have worked years ago, but calling for more violence and destruction in the same community that was just burned is not the answer. It’s narcissistic and hypocritical on the part of Speaker Nancy Pelosi not to condemn these divisive comments by Waters – especially with the verdict about to be handed down. Even the judge overseeing the case called Waters’s comments “abhorrent” as they appear to incite violence.

It’s the same behavior Waters exhibited in 2018, when she advocated abuse of members of the Trump Administration: “[I]f you see anybody from that Cabinet in a restaurant, in a department store, at a gasoline station, you get out, and you create a crowd, and you push back on them!” And in 1992, when her district burned after the Rodney King verdict, she refused to call it a riot. Instead she called it a “rebellion.”

At what point do we as Americans say “no” to any lawmaker who wants to incite violence?

On a segment of the Fox Business Network’s “The Evening Edit with Elizabeth MacDonald,” Project 21 Co-Chairman Horace Cooper was asked about the increasingly hostile anti-police rhetoric and its possible impact on minority communities. Horace called it all a “slur against America” that will have “generational consequences.” He added:

Even if they don’t tell you directly to confront the police, they’re undermining the authenticity – the rightfulness – of the behavior of law enforcement. They undermine it, and we are seeing a wave of crime taking place…

Black Americans, brown Americans and other Americans [living in urban areas] are particularly hard hit [by the economic effects of the pandemic]. The last thing these communities need is to have law enforcement shunned in their areas that will make it nearly impossible for them to recover.

Horace said: “Shame on these individuals for condemning law enforcement in that environment.”

America is declining in both morality and virtue. Our society has become overwhelmed by people who have no values, low …
Read More

The biggest COVID loser? The Constitution. The winner? Ron DeSantis, by Richard Holt

Lawbreaking has been rampant during this pandemic, and not just among rioters and looters. The biggest scofflaw has been government …
Read More