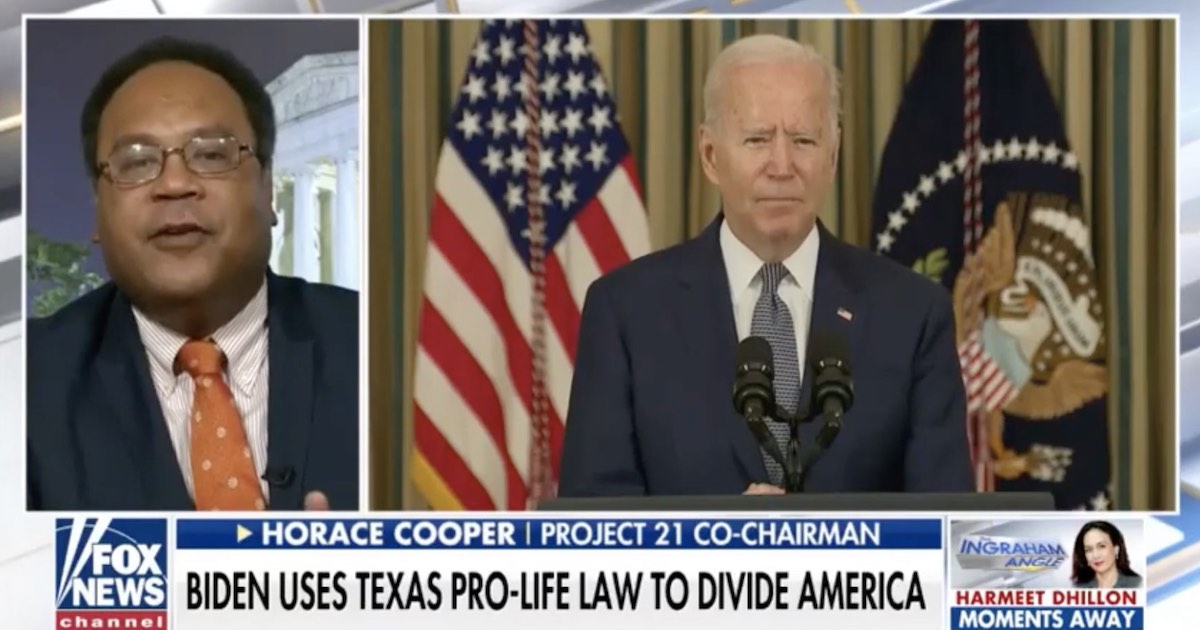 In an attempt to deflect unwanted questions about new protections for the unborn in Texas, White House Press Secretary Jen Psaki tried to infer that men should have no opinion regarding abortion policy – even though the White House and the media seem to have no problem with the views of men who support unfettered abortion.

Yet, with all of the new woke rhetoric embraced by the Biden Administration, designating who can be pregnant appeared illogical to Project 21 Co-Chairman Horace Cooper. As he pointed out during a panel discussion on the Fox News Channel program “The Ingraham Angle”:

I think it was just the FDA administrator who was explaining that we have to refer to “birthing people” instead of mothers!

The Biden Administration is currently engaged in a full-throated, “whole-of-government” attack on the new Texas law allowing citizens to bring complaints against those who engage in the termination of a pregnancy after a baby’s heartbeat can be detected. During an angry address, Biden called the law “un-American,” and the U.S. Supreme Court’s unwillingness to immediately overturn the new law an “unprecedented assault” on women.

Let’s put aside the hostage note-reading that we just saw from President Biden. The qui tam concept – the idea of allowing the citizen to be on the lookout to make sure that significant concerns of the community are being met – is a longtime legal concept. In fact, you can go back to the Lincoln Administration and you can see this concept where people were encouraged to go into court, and they got a bounty if they identified fraudulent behavior that was hurting our Civil War effort.

We continue on today with this same concept. Far from being un-American, it is central to our operation for good federal government resources altogether.

And while the Biden Administration obviously does not understand the law, it was also clear to Horace that the White House is out of its depth when it comes to understanding government in general. What’s going on in Texas, combined with the Supreme Court not immediately stepping in to support the Biden Administration and the liberal side, seems to have created chaos among the president and his supporters. This shows the need for a basic lesson in civics.

He doesn’t know the law in Texas. He doesn’t understand how the Supreme Court works and how these kinds of cases occur. But more fundamentally, he and others in his administration and on his team don’t believe in the fundamental principle of self-government.

You persuade people. There is a reason why so many places all across this land are fighting to protect unborn, innocent life – because people are being persuaded.

It is not the case that this is being imposed by the state legislatures. It is the case that people care about this issue and they ask their representatives. And the other side, instead of doing any pushback, they have no arguments.

“They have nothing but condemnation,” Horace concluded. “That doesn’t work with self-government.”