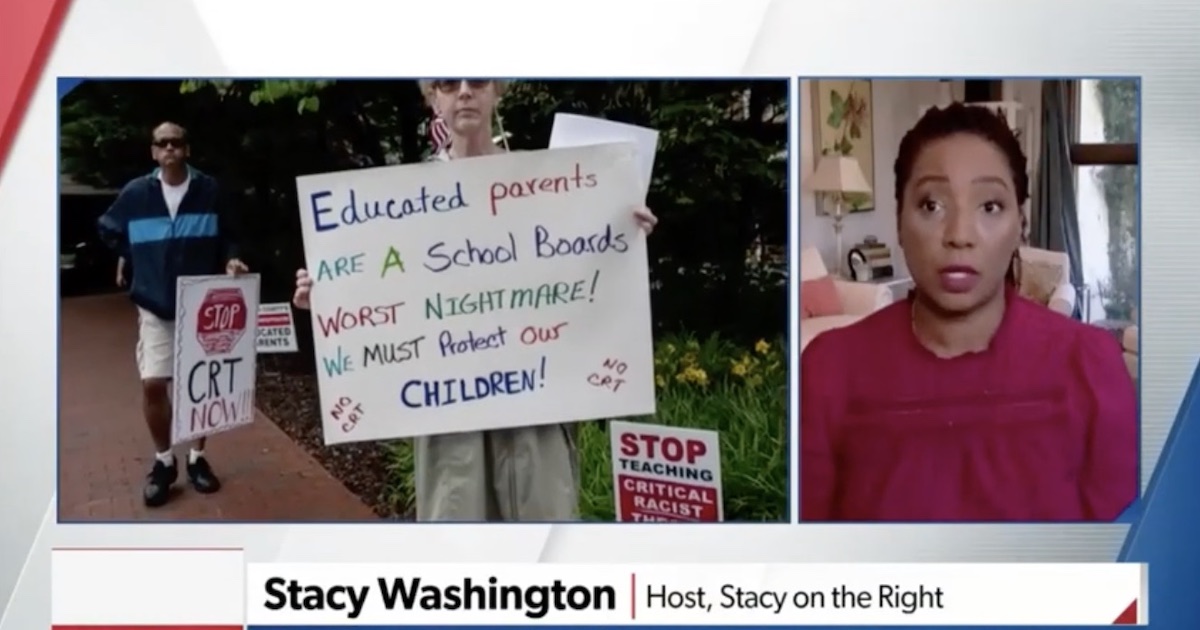 Parents who have discovered that their children are learning divisive critical race theory, are being exposed to sexualized content and are being taught in politicized classrooms are now speaking out. When school boards ignore them, they are raising their voices in protest.

This exercise of First Amendment rights is being called a “threat” by the National School Boards Association (NSBA), which has asked the White House to intervene against their angry constituents. The NSBA referred to concerned parents coming to school board meetings as “angry mobs” – a claim that’s been repeated by the establishment media.

But Project 21 Co-Chairman Stacy Washington – who has served as an elected school board member – understands and agrees with the need for these parents to be heard. “I can tell you that there’s nothing more volatile than dealing with people’s money and their kids,” she noted during an interview on the Newsmax program “John Bachman Now.” And she stated quite simply:

This hasn’t stopped Biden Administration Attorney General Merrick Garland from enlisting federal resources, including the FBI, to look into what he described as “[t]hreats against public servants.” This kind of thinking, Stacy said, is not respectful to parents seeking to fulfill their family obligations:

As a parent, it is your God-given right and responsibility to oversee the education of your children. And if you feel that the people who are doing that are doing a bad job? Get irate. Because there’s nothing wrong with an angry speech.

Stacy is concerned about school boards “lawyering up” when “these people should be responding to the needs of their constituents.” It’s the public officials, she pointed out, who are causing the situation to escalate:

School board members are elected, and they should be responding – not lawyering up or seeking to have these [parents] punished. That’s why people are so angry. Their needs are not being addressed. They’re not being responded to. The answer here is for [the school board] to respond instead of getting upset and trying to sue the parents.

That’s why Stacy suggested that parents may need to take their children out of these situations altogether. She explained that, even in the absence of true school choice options, parents removing their kids from troubled school districts can help bring about change:

[A]t some point, you have to make a decision. And pulling the child [is an option] – because the funding does kind of go with the child. The average daily attendance rate is basically how many butts are in the seats over a 30-day period. The average of that – that’s where the federal funding comes from.

Show these people you mean business. After you’ve given your speech, the school board says they’re gonna send the FBI after you? Not if you’re kid’s not in the district. Take the kids out. If they see 30-40% of the people leave, they’ll decide to change.

Commenting on the contempt many school board members seem to have toward concerned parents, host John Bachman remarked: “God forbid they would exercise a little… self-reflection on what’s actually happening – why these parents might be upset.”