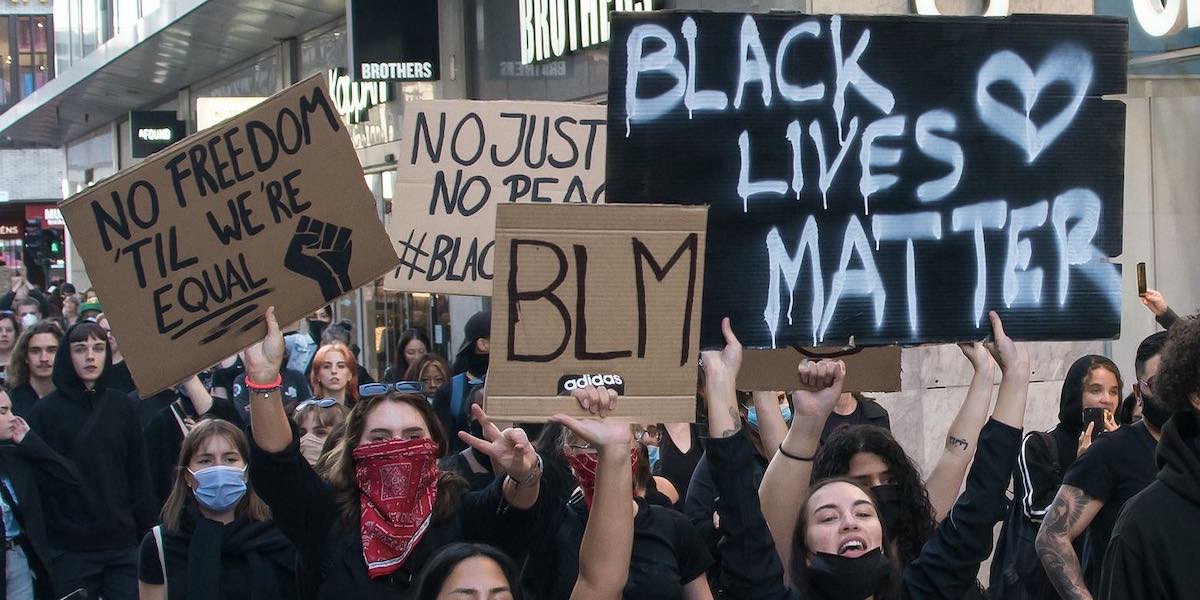 Before the cease-fire, Hamas terrorists rained down over 3,000 rockets on Israel. Such hostility is nothing new, since Jewish-Muslim tensions trace back to the times of Avraham (Abraham), with respective Jewish and Muslim progenitors Isaac and Ishmael. But enemies of Israel are armed with new social justice weaponry to advance their cause while guns remain silent.

For instance, Black Lives Matter (BLM) tweeted: “Black Lives Matter stands in solidarity with Palestinians. We are a movement committed to ending settler colonialism in all forms and will continue to advocate for Palestinian liberation. (always have. And always will be). #freepalestine.”

BLM openly throwing support behind “Palestinians” seems to be a calculated effort to open up a new and invigorated front to convert black Americans and woke corporate community leaders who now listen to BLM to the anti-Israel crusade.

As a Jewish woman who is also black, it causes me great concern.

I had problems with BLM from the start. I see them rallying around perceived injustices, often making martyrs of the undeserving. They seem to profit off the truly deserving, giving them little or no acknowledgment. And BLM completely ignores blacks killed by other blacks – 17,201 between 2013 to 2019 as compared to 1,592 blacks killed by whites. Aborted black babies also don’t matter.

I take issue with BLM vilifying the Jewish nation of Israel as “colonizers” and an “apartheid state”— equating the Palestinian issue with black American history and effectively siding with Iranian-backed Hamas terrorists.

Historically, there is biblical and archeological proof that Jews lived in the current land of Israel since the time of Abraham. Also, Israeli Jews are of diverse races and backgrounds – with many migrating from Arab-controlled countries where they were expelled over the last century. Vast numbers of Israeli Jews are, or are descend from, refugees.

As for BLM helping to label Israel an apartheid state, I’m old enough to remember the real apartheid of South Africa – where the black majority was not allowed to vote, hold office, marry whites or live outside specific areas while under white government rule. In contrast, Israel has 1.9 million Arabs and 7.5 million Jews. Arabs can vote, hold office, serve in the Israeli Army and police forces and live and work alongside their Jewish countrymen. And Israel does not rule Gaza – Hamas does.

Israel operates nothing like apartheid-era South Africa. Sadly, injustices inflicted upon the Palestinian people are often by their own people. Yet BLM compares the plight of Palestinians to black Americans. It’s far from reality, and it cheapens both narratives.

Many blacks can descend from those brought to America as slaves, while Palestinians were never enslaved – at least not by Israelis. The struggle for equality waged by American blacks is a racial one, while the Palestinian cause is nationalist in character. And Palestinians continually refuse offers for their own land. After refusing the initial 1947 United Nations partition plan, they engaged in an Arab invasion that next year. They refused in 2000 and 2005, and Israel still forcibly removed its citizens from Gaza so Palestinians had self-rule. Palestinians also received billions in international funding, while the Civil Rights Movement worked with what they had.

Comparing these two situations is apples to oranges. The only similarity is that BLM and their progressive allies bestow both groups with victimhood status – asking others to intervene.

BLM deny they support Hamas terrorism, stating solidarity with the Palestinian people. But Gaza’s Hamas leaders were elected by the Palestinians. And they are not condemning Hamas attacks. Why doesn’t BLM tweet #freepalestinefromhamas? Where was BLM when Hamas attacked protests by Palestinians against the Hamas-backed government? Where were they when Palestinian converts to Judaism were jailed and tortured?

Black Lives Matter leaders are no more working on behalf of the Palestinian people as they seem to be truly working for all black Lives. Instead, like many special interests, they are virtue-signaling to attract more attention to themselves. Their main goal is not unity, but sowing the seeds of division – not only in America, but wherever they can. The goal is to divide, conquer and pave the way for their way of ruling the world – whether or not it is fair and just for all.

Project 21 member Marie Fischer, a native of Memphis, Tennessee, is a college information technology professional with over 20 years of experience in the field. This was originally published by The Jerusalem Connection Report.