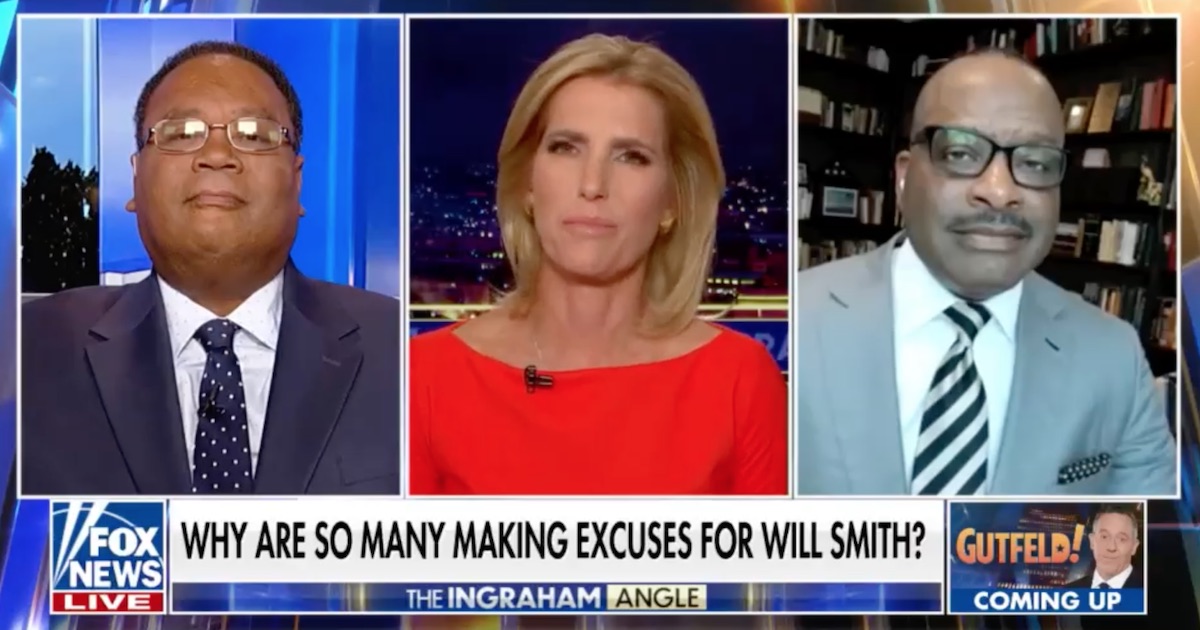 After actor Will Smith jumped onstage and smacked comedian Chris Rock at the Oscars for a joke Rock made about Smith’s wife’s hair (or lack of it – she suffers from alopecia), the media began defending Smith. On NBC’s “Today” show, host Craig Melvin lamented the reputation of black men not being able to “control their rages.” Host Hoda Kotb suggested that Smith’s behavior was due to his dysfunctional upbringing and bad relationship with his father.

This has nothing to do with race, but it has a lot to do with the left continually normalizing and racializing behavior. How about: Everybody’s capable of good behavior, and bad behavior ought to be frowned upon whenever it happens?

On the Fox News Channel’s “The Ingraham Angle,” Horace and fellow Project 21 member Vince Ellison discussed the hypocrisy in how the left and the mainstream media are dealing with this irrational emotional outburst in front of those who profess to be the best of American society.

“I’m watching the left cannibalize itself,” Vince laughed, “and I’m having a good time doing it.”

The left never gets away from apologizing or normalizing bad behavior. And – in this case – they apologized, they normalized and made it actually a cool thing to do to mock people for their medical conditions. I mean, I know we want to do a lot of things for a joke, but we can probably find a lot to laugh about without having to go in that particular direction.

Host Laura Ingraham brought up that “rank violence… is glorified on social media.” She cited streaming fight videos that rack up millions of views, and the proliferation of random violence in America these days that includes “knockout games” perpetrated against innocent people as well as bystanders being pushed in front of trains for no apparent reason.

Now, she pointed out, two of entertainment’s biggest stars are fighting in front of their comrades – broadcast to an international television audience. Vince remarked:

We see this type of violence all the time. You’ve got two things going on here: you got a guy with no respect and a guy with no impulse control. Then you have this collision. But the left is cannibalizing itself.

While Smith later apologized, saying he was “out of line” and “wrong,” Vince said the act itself speaks ill of those who profess to be our betters:

This is a harbinger… to seeing this happen in Hollywood. These people are the people who try to tell us how to be tolerant. They tell us how to be nice to one another. They want to lecture America all the time about our shortcomings – but then you see this.

“And we have to pray for them,” Vince added. “Hopefully, they will be better.”

Similarly, Horace had some advice for how the entertainment elite could have handled the situation with taste – teaching others a valuable lesson in the process:

Do you know the most adult and responsible thing that could have happened last night [at the Oscars]?

That would have been if Will Smith heard this joke or this comment and he found it offensive, he and his wife could have immediately stood up and walked out of the assembly. When they called his name to announce he had actually won an Oscar and he wasn’t there, someone would have to explain that offensive joke created this problem.