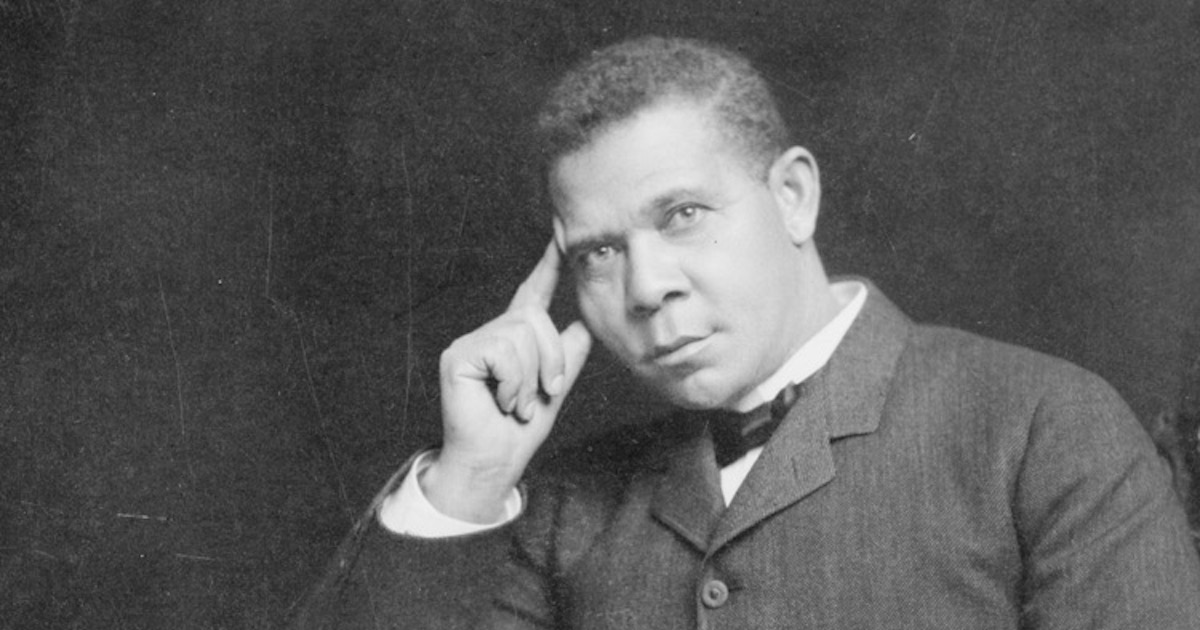 However, there’s one prominent American that isn’t included in this pantheon of historical greats. In fact, he’s one of the most underappreciated historical figures in American history.

Born into slavery, he was determined not to allow his past, nor his race, determine his future. He pursued education, emphasized character development and self-determination. He also stressed the obligation and the virtue of­ work.

His ability to transcend enormous hardships saw him literally help build a school from the ground up. Though he repeatedly refused the temptation to become a politician, his record of personal and professional excellence enabled him to advise Presidents Roosevelt and Taft. Despite his extremely modest beginnings, he became an influential black intellectual and one of the foremost educators of his time.

As a result of his influence on Negro education and economic development– in addition to his desire for racial conciliation in the South, he was once called the “foremost man of his race in America.”

Who is this great man?

Washington was born a slave on a Virginian plantation. Though uncertain of his father’s identity, he suspected it was a white man living on a nearby plantation. His mother Jane raised him, his brother John, and his sister Amanda in a dilapidated slave cabin.

At nine years old, Washington was freed from slavery. He and his family moved to West Virginia to start life anew. Washington desperately longed to attend school, but his stepfather concluded that his son was more valuable to his family working in the local salt mines.

Despite this disappointment, Washington taught himself how to read and write, and attended school periodically. As a teenager working in the mines, he learned of a boarding school– Hampton Normal and Agricultural Institute in Virginia– that specialized in educating poor blacks. Eventually, Washington made his way back to Virginia to pursue his education.

But it wasn’t easy.

Washington had to overcome significant challenges. He walked most of the 500-mile journey back to Virginia. On the way, he slept under a boardwalk at night while working during the day. Upon reaching Virginia, Washington worked his way through school despite being in frequent need of resources like clothing, books, and tuition. Reflecting on his ability to face these and other challenges, Washington believed that “success is to be measured not so much by the position that one has reached in life as by the obstacles which he has overcome.”

Shortly after graduation, Washington was called upon to begin his life’s work– heading an industrial school for blacks in Alabama– the Tuskegee Normal and Industrial Institute.

When Washington arrived in Tuskegee, Alabama, students were hungry for education. However, they despised work because work was associated with slavery. Washington rejected the connection and stressed the nobility of work. He showed his students that education wasn’t limited to the classroom.

At Tuskegee, students not only learned how to read and write but they also learned trades and other skills that would allow them to contribute to the economy– and the improvement of society. Washington was convinced that education and industry subsidized racial uplift among blacks but also racial respect for blacks. After graduation, it was Washington’s desire for students of character to provide innovative services and skills to their neighbors rather than working for them.

Despite his personal and professional record of achievement, Washington doesn’t receive the approbation he deserves. Why is Booker T. Washington excluded from the giants of black– and American– history?

It’s because of a speech he gave at the Atlanta Exposition, in September 1895, which has derisively become known as “Atlanta Compromise.”

At the time of the speech, racial hostility toward blacks in the south was increasing. Darwinian ideas about black inferiority were spreading. Racial stereotypes disparaging black humanity– in newspapers and minstrel shows– were widely embraced.

Increasing racial tension led to suggestions by both blacks and whites that American blacks should resettle in Africa.

It was in this cultural caldron that Washington gave his remarks– a practical appeal to anxious southern whites and vulnerable southern blacks.

Washington affirmed in his address that blacks would forgo the pursuit of political power. He hoped this would alleviate the racial anxiety toward– and resentment of– blacks, among whites. In exchange, Washington recommended that whites not prevent blacks from seeking economic prosperity. Consequently, he exhorted the audience– filled with a mixture of blacks and whites– to “cast down your bucket where you are,” encouraging a mutual, socio-economic interdependency among the races in the South.

Booker was convinced that economic development and success would counter the myth of black inferiority and earn blacks the respect of their southern neighbors. To this extent, he believed that “no race that has anything to contribute to the markets of the world is long in any degree ostracized.”

To further allay the suspicions of southern whites, Washington added that blacks and whites could be “separate as the fingers, yet one as the hand” – a social agreement that he felt was “essential to human progress” in the South.

Was Washington’s speech a compromise? Yes, but it was a very calculated and essential one that Washington felt necessary to protect the physical safety and economic interests of blacks.

But Washington’s compromise has been intentionally mischaracterized as capitulation– a form of accommodation to white supremacy because he rejected political protest and agitation as the primary tool for black advancement and civil rights.

Washington’s belief was that the transcendent values of personal responsibility– good character, hard work, education, and self-determination were what first gained respect. Accordingly, freedom and equality would follow.

Sadly, Washington misjudged the racial hatred of southern whites. Subsequently, his vision of racial cooperation didn’t happen as he anticipated.

Though constructive political activism can be a useful tool for American blacks, it cannot be the only tool. American blacks can and should establish their ability to control what they’re able to control, to achieve that which they’re capable of achieving. This must be done on their own terms and with as little intercession or interference as possible.

By controlling their fate, blacks will establish equality with their peers.

In doing so, blacks must steadfastly reject the “special privileges” associated with the hard bigotry of no expectations. Fabricating “equity” on behalf of blacks reveals an absence of standards and expectations with respect to black intelligence and capability– be it in socio-economic, academic, and moral capacities. In fact, “equity” is racism by another name.

Washington had faith in both America and the ability of blacks to excel. It’s time for blacks to demonstrate that same faith.

Because of his sacrifices, accomplishments, and agenda for success, Booker T. Washington should be reinstated– and celebrated– as one of the prominent Americans in our nation’s history.

Project 21 member Derryck Green is a writer and blogger whose work has appeared in and been cited by newspapers and online media across the country. His research includes economic policy, culture, race, abortion, religion, and immigration. He earned his Master of Arts in Theological Studies from Fuller Theological Seminary, and his doctorate in Theology and Spiritual Leadership with a concentration in Identity Formation from Azusa Pacific University. This was first published at Ricochet.